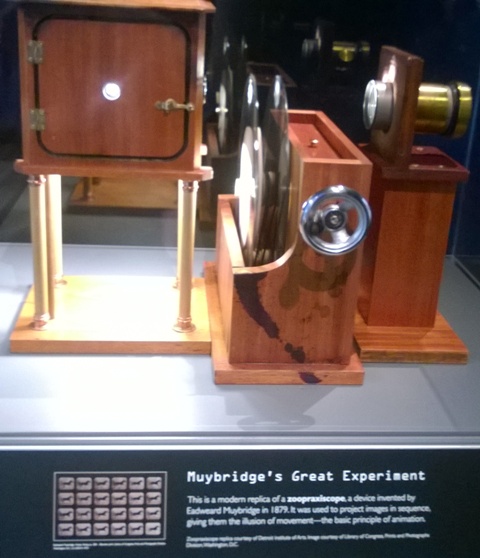 Per Matt
Animation took center stage on Thursday, as the Frist Center For the Visual Arts hosted the Geek Media Expo Night.

Geek Media Expo staff members were on hand promoting their upcoming convention and offering discounted registration passes for GMX Vol. 6, which will take place on October 24 – 26. Discounted Frist admission tickets were also offered, where guests were encouraged to explore the three main exhibits on display.

An excited crowd checked out the Watch Me Move: The Animation Show in the Ingram Gallery, which highlighted more than 100 animated works on display. Some examples showcased very early animation techniques and experimental works, including stop-motion, time-lapse, puppetry, clay animation and a live-action-animation hybrid.

The exhibit highlighted the animation process, giving a brief history, as well as featuring the many pioneers of the medium. Some of the highlights included Walt Disney’s Silly Symphonies: The Skeleton Dance, Max Fleisher’s Rotoscope invention, the first animated film (Humorous Phases of Funny Faces by James Stuart Blackton in 1906) and works by Noburo Ofuiji who was one of the first anime directors. There were many modern animation examples as well, including the works of Hayao Miyazaki, Tim Burton and even Steven Spielberg.

There were so many animated examples on display, it almost created sensory overload. I really enjoyed it. In fact, I chuckled when I saw two movies posted side-by-side: the movie Golem was shown next to scenes of Gollum from The Lord of the Rings: The Return of the King. That made me smile.

According to Media and Public Relations Manager Buddy Kite, there have been past exhibits that included animation, but Watch Me Now is the first entirely dedicated to the medium. This exhibit is organized by the Barbican Centre, London and has been on an extensive international tour.

Mr. Kite also notes, “What’s golden about this exhibition — and what I think everybody hoped would happen — is to see a younger visitor enthralled by some of the pioneering works like Aesop’s Fables: The Iron Man or Walt Disney’s Silly Symphonies: The Skeleton Dance, which dates back to 1929. This exhibition, while not a strict chronology, really asks us to make connections through the evolution of the form.”

Also on display is Real/Surreal: Selections from the Whitney Museum of American Art in the upper-level gallery, featuring works from the 1930s, 1940s and 1950s influenced by European Surrealists like Salvador Dali and René Magritte. The exhibition includes works by Andrew Wyeth, Edward Hopper, Grant Wood, Man Ray and Thomas Hart Benton, among others.

Maira Kalman: The Elements of Style was also featured, displaying paintings that illustrate the English writing style guide, The Elements of Style by William Strunk Jr. and E.B. White. American Ballads: The Photographs of Marty Stuart was also on display, showing behind-the-scenes depictions of legendary musicians, eccentric back roads characters to dignified portraits of members of the impoverished Lakota tribe in South Dakota.

I had a blast visiting The Frist Center of Visual Arts for the very first time. The GMX crew created a fun environment for the attendees to really enjoy the exhibits, which were really great.

Make sure to visit the Frist Center soon, because these exhibits won’t be in Nashville for very long. Watch Me Move is on display through September 1st, Real/Surreal is here until October 13th and American Ballads will end its exhibit on November 2nd.