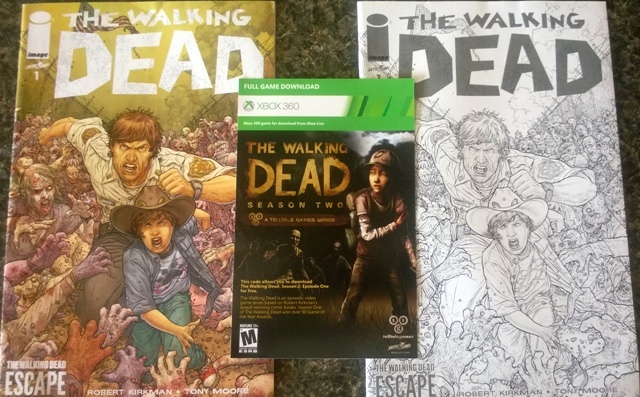 Included with the admission price for attending The Walking Dead Escape — which is a Zombie obstacle course-immersive environment — participants received the parting gift of an exclusive gift: The Walking Dead variant graphic novel. Attendees could choose between two collectible covers (the painted cover and the sketch variant), both created by artist Juan Jose Ryp.

Both comics are actually reprints of The Walking Dead issue #1, only available for survivor and walker ticket-holders of the attraction. Also included in the comic book was a free download coupon of Telltale Games’ The Walking Dead: Season Two, Episode 1. Both freebies are included to whet the undying appetites of fans of the top-rated TV show, which is currently on hiatus until October.

As an added treat, all Escape attendees are invited to stick around for the after party. A fan fest is set up to celebrate the franchise, complete with undead cosplayers lurking around a themed-party atmosphere.

In our San Diego Comic-Con preview interview with Skybound EXP President David Isaacs, he hopes to create an infectious environment that’s fun for fans of all ages.

With video games, novels, comic books, merchandise and live events, The Walking Dead franchise has found its way into pop culture that exceeds the television show… it’s creeping into our undead consciousness!

Currently, The Walking Dead Escape is on tour, about to start up the second leg of its schedule. To find out more information on where the undead outbreak will happen next, check out the company’s schedule.