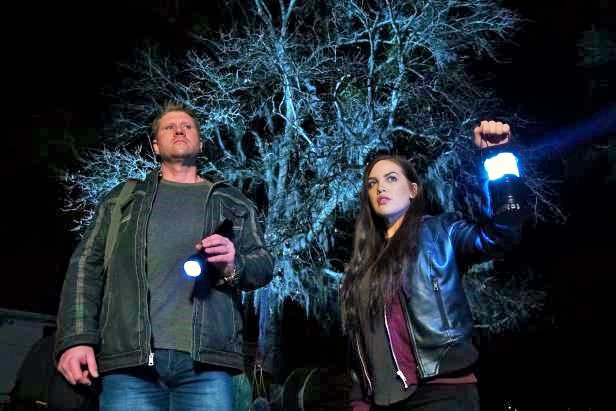 Does human fear feed the paranormal? That’s the theory behind Ghost Bait, a TV show that chronicles the paranormal investigations of Bob Magill and Tina Storer. Recently brought back to life after a six-year hiatus, Travel Channel brings a different type of ghost hunters to television.

After visiting allegedly haunted locations and conducting their own paranormal investigation, Bob and Tina use sensory deprivation and immersion therapy to elevate a client’s fear level, hoping to draw out any entities and forcing a supernatural reckoning. Fears turn into anger, so they can take back control of their situations. How do the ghost hunters accomplish this? By placing the terrorized person alone in a dark room with a burlap sack covering their head, confronting their problems face to face, in a way. By removing one of your senses (in this case, vision), the other senses are supposedly heightened and the fear factor is raised. Sounds like a lot of drama, but does that mean any ghosts are actually busted?

“Bob and Tina are two of the most dedicated paranormal investigators out there, and the unique way they conduct their investigations will keep you on the edge of your seat,” Jane Latman, general manager of Travel Channel, said in a statement.

So far, through two episodes, the pair visits locations on separate ends of the country, leaving both with positive results. In the first episode, there’s hints of odd sounds echoing in the darkness, while claims to have been touched or temperature drops take place, but the only real evidence shown is from the thermal cameras, as something or someone is possibly nearby, watching the crew.

In Episode Two, new homeowners are experiencing bumps in the night and objects getting broken, afraid to live in their own house. Previously investigated by another ghost-hunting group, audio and video recordings prove something is there, and both are creepy. A demonologist is brought in to cleanse the house, making the episode more interesting to watch. It’s unclear how much is revealed to the subjects about this show beforehand, but i’m pretty sure no one would willingly agree to do what the investigators put these victims through.

As a 30-minute show, Ghost Bait doesn’t waste a lot of time like all the rest, stretching out thin material into an hour-long production. Season 1 will consist of 12 half-hour episodes of confronting a menacing darkness. Paired with Haunted Case Files, Paranormal Caught on Camera, Haunted Hospitals, Ghost Asylum, Ghost Adventures, My Ghost Story, My Haunted House, Paranormal 911, Haunted Case Files, In Search of Monsters, Destination Truth and Expedition Unknown (at times), Travel Channel has mined a lot from the genre that promotes the strange, the unusual and the supernatural that airs throughout the year. And the upcoming show, Portals to Hell, seems to continue that trend. With only a few more shows, it should really be renamed the Paranormal Travel Channel.