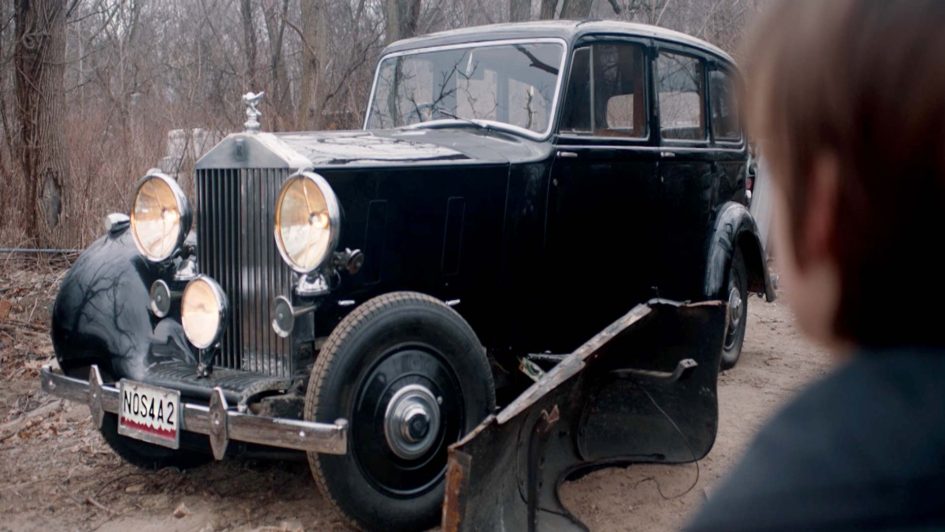 As a digital short, Ghost builds upon the mythology of NOS4A2.

Long before today’s self-driving cars were developed by VW and Google, Nos4A2 had a fully autonomous 1938 Rolls-Royce Wraith, which drives a killer backstory in the digital short, Ghost.

For all intents and purposes, this short film is a ghost story that’s a callback to a previous episode of the TV show (itself an adaptation of author Joe Hill’s book series), which claimed the immortal Charlie Manx kidnapped a child and his father years ago. Here, for 12 minutes and 45 seconds, the backstory plays out.

All the provided details listed on AMC’s webpage describe Ghost this way: “In this digital short, a boy forms a strange and dangerous bond with a possessed car that shows up at his father’s garage.”

Is that enough of a tagline to interest you, the viewer, into learning more about the show’s mythology? It was for me.

NOS4A2: Ghost introduces the audience to the hidden universe that contains Christmasland through a side story. In it, only three actors appear, but the classic car takes center stage as the show’s canon expands. Taking place at a Nebraska junkyard, a young child’s interest in a damaged old car leads to bloody consequences, and “Father Christmas” Charlie Manx makes a quick cameo via a telephone call, without Zachary Quinto actually being filmed on screen.

The entire short looks great and is works well, featuring only three actors. As noted via dialogue, there were less than 500 Rolls-Royce Wraiths produced in England, which means somehow, this one may have an evil origin story. Scissors for the Drifter is touched upon and the entire production is enjoyable.

I have to admit, the pilot was nothing but a hot mess, but I went against my better instincts and stuck with the show, thinking it could only get better. I’m glad I did, as the overall storyline has greatly improved, but after seven episodes, the main characters are still wobbling on shaky legs (I still like the purple-haired Maggie Leigh the most, played perfectly by Jahkara J. Smith. She interests me WAY MORE than the main character, Vic McQueen (played by Ashleigh Cummings). After watching Ghost as a standalone episode, I am more interested in learning about the events on the TV show.

I really enjoy the prospects of watching more digital short series as tie-ins to a variety of network series. It is definitely a way to grow an audience and more importantly, a way to deepen the mythology. Recent television shows that also included online-only short series include The Walking Dead, as well as Fear The Walking Dead (maybe AMC politely encouraged these shows to film the side stories in order to possibly raise ratings). It’s entirely possible TV shows on the bubble that didn’t also include extra digital shorts, like Deadly Class, The Passage and The Gifted could have really benefited from the extra publicity, possibly extending those series. Instead, each one was cancelled way too soon.

Give Ghost a chance and while you’re at it, make sure to check out NOS4A2. It’s not too late to catch the previously aired episodes On Demand before the season finale airs next week, on July 28, 2019.