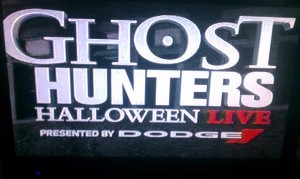 Taking a break from Zed for the moment, I wanted to briefly opine about the current status of The Ghost Hunters. I’ve been a fan of the show ever since its premiere on the Sci-Fi channel. Grant and Jay may have had a genuine interest in the paranormal, but as of now, the Ghost Hunters have officially sold out.

I can’t quite put my finger on the exact moment when they changed from helping people with young children who may or may not live with ghosts, into a brand of entertainment, but I’m done with them. I drove my ex crazy watching all the episodes last season. I’d get so frustrated watching each one. The only thing they were good for was for putting me to sleep. Each and every time. They almost never, ever, “discover” any true evidence. But what the “investigators” always seem to uncover is never any quantifiable proof, but always something insignificant and unmeasurable.

Steve and Tango used to be solid investigators. Now they’re only good for comic relief. Honestly, knocking “Shave and a Haircut,” seeking a reply, and upon hearing a sound — any sound — claiming it to be from a ghost, isn’t any type of science. It’s just laziness. Kris used to be my least favorite. She was only good for screaming or cursing in the dark. Sometimes she’d “feel” something touch her, like a spider web. Must be a ghost! Now that she’s been shipped off to Ghost Hunters International (thank goodness!), now we’re stuck with Amy (who isn’t much better). Adam won his spot on the show by participating in Junior Ghost Hunters (or whatever the short0-lived spin-off was called). He was taught the ways of The Force by Steve and Tango. Every single unscientific method. And he was the best they had to offer? He acts ditzy. Must be a true blond. And recently, Jay made the brilliant deduction that dogs are great paranormal investigators, or something like that. Because if a dog happens to hear something, possibly a small critter, it can be mistaken for a ghost and make for great TV. Dogs are very scientific. Right? And last but not least, Jay has recently invited his 17-year-old daughter to become the newest member of TAPS. All she does is talk. And talk. And talk and talk and talk. She adds nothing, whatsoever. She even talks her dad’s ear off. And if he can’t stand her talking, it’s obvious the millions of viewers can’t stand her either. And who can hear fake ghosts if she’s talking their fake ears off?

Long story longer, The Ghost Hunters was the first reality show featuring paranormal investigators. But just because they were first, doesn’t mean they’re the best. Their live Halloween episode is usually a highlight of the season, but lately it’s become unwatchable. SIX HOURS OF UNWATCHABILITY. I mean, who wants to see a bunch of unbelievable people standing in the dark, finding nothing, for six hours? Not me. I tried. Multiple times. But then fell asleep. Each time.

Not even Josh Gates can save this sinking ship (and I really like the guy).

A while back, there was even a huge online hubbub about Grant actually faking some evidence while investigating underneath The Shining hotel. He has yet to admit any wrongdoing. Jay has tried to distance himself from the whole ordeal.

In summary, The Ghost Hunters have become nothing but a company-wide cross-platform promotion. It’s unwatchable. The so-called investigators never find any proof. And they’re annoying.

Rest In Peace, Ghost Hunters. I’m done with you. Unless I’m suffering from insomnia.