The Walking Dead: Save the Last One 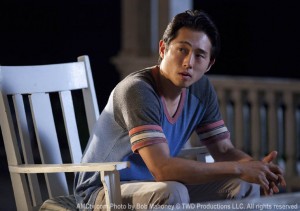 SPOILERS! SPOILERS! SPOILERS!
————————-
As if on command, after complaining about Glenn’s lack of prominence these last few episodes, in Save the Last One, he’s back! This time Glenn plays a prominent role in fleshing out the character development of Maggie, one of the new characters from Herschel’s farm. In what seems to be a probable love interest for Glenn, Maggie grew up on the farm, rides horses and swiftly takes care of zombie business. Although the episode mainly focuses on Shane and Otis and their recovery of medical supplies for Herschel, I like to look ahead at possible scenarios in future episodes.

At the conclusion of their recovery, Shane turns on Otis. But as much as they try to make Shane into a bad guy on the show, Lori is by far the worst character. When the zombie outbreak happened, she not only gave up on her husband (who was still at the hospital, in a coma at the time), but she willingly dove into the sack with his best friend as well. Hands down, she’s the biggest villian on the show. I hate her. Soon, she will reveal her true self. Can’t wait. Pairing Daryl with Andrea is a good move. Hopefully, the two of them will become hunting buddies at some point. Sometime soon, Shane will venture out on his own adventures. The moment can’t get here quick enough. Let hi leave for a while, please. Either Sophia will be found dead or alive. She’s gotten more attention after being gone these past few episodes than she did the entire time she was around. Replace the character with an important one. And can we resolve this situation before the zombies return? Speaking of which, seems the zombies forgot all about the humans in the RV. Their noses must not be working anymore.

I’ve come to the conclusion that when the core main characters are separated, there seem to be too many “quiet” drawn-out scenes that are happening during the zombie apocalypse. Let’s get the whole gang back together, so we can have a major battle occur at Herschel’s farm. This could get fun. Real fun. Hopefully soon.

Episode Strength:
Glenn’s return. Duh.
Episode Weakness:
Shane betrayed Otis before Otis could tell his backstory. Maybe via flashback, he returns.
WTF Moment: How can so many zombies be so quick and quiet? How can Shane and Otis let their guard down on multiple occasions at the fences? No way they’d be that quiet.

Noteworthy Quotes:
– “Got bit. Fever hit. World’s gone to shit. Might as well quit.”
– “Maybe this isn’t a world for children, anymore.”