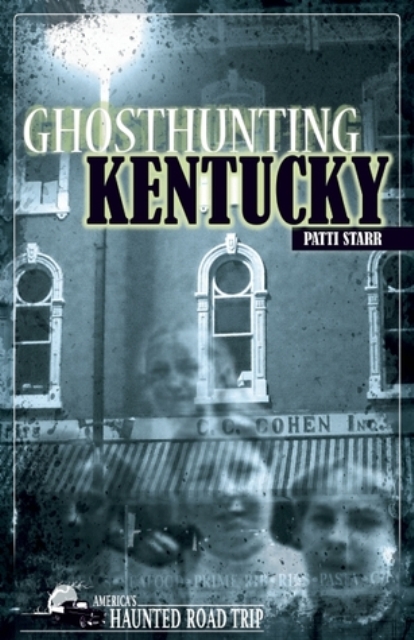 The Bluegrass State offers many haunted and historic locations available for thorough investigation!

With Halloween right around the corner, real-life haunted locations get a little extra publicity. Just up the road in Kentucky, author Patti Starr has chronicled many of her paranormal experiences in Clerisy Press’ Ghosthunting Kentucky.

Ms. Starr is a professional ghost hunter who teaches hopeful paranormal investigators a ghost-hunting certification class. Recently, at ScareFest, the paranormal and horror convention in Lexington, KY which she co-created, I spoke to her about writing the book and investigating haunted locations.

In Ghosthunting Kentucky, Ms. Starr recounts her many experiences and details her evidence. Each location she visits is open to the public. Maps and directions are included, so the reader may recreate her travels.

Some of the major locations she visits include:
– Bobby Mackey’s Music World: This country-music bar opened in 1978 and involved murders, suicides, demonic rituals and sacrifices. This location was showcased on the TV show Ghost Adventures.

– Waverly Hills Sanatorium: As featured on the TV show Ghost Hunters, this hospital had the highest tuberculosis death rate in the United States during the 1900s (including many children). The tale of a nurse who performed an abortion on herself (after getting pregnant by a co-worker) and later hanged herself haunts this location, among many others.

– Buffalo Trace Distillery: This distillery is part of the Kentucky Bourbon Trail. Ms. Starr communicated with a spirit (possibly Col. Blanton, former president of the bourbon plant), hoping to uncover the mysterious details of a secret from the afterlife.

– Lock and Key Cafe: In previous years, this location was a bank. The then-President of the bank shot himself and now haunts the restaurant (a gruesome reminder hangs in the women’s bathroom, where a bloody bullet hole remains on display).

– Mammoth Cave National Park: This is the largest cave system in the world (with total of 367 miles of caves) and is the oldest tourist attraction in North America (open since 1816). Many paranormal events take place there, possibly by spirits of a former cave explorer or the many tuberculosis patients who died there.

– Colville Covered Bridge: Of the 400-plus covered bridges built in Kentucky, only 13 have survived — many of which witnessed life-shattering events. Ms. Starr visited this location, communicating with spirits via EVPs and using an Ovilus, which indicates energy through reciting words.

– Hall Place Bed and Breakfast: This historic and haunted bed and breakfast was a former stop of the Underground Railroad, complete with hidden trapdoor leading to an underground cave. Many spirits visit this location.

– Jailer’s Inn Bed and Breakfast: Ms. Starr communicated with a female spirit, who may be searching for her departed husband at this location, which is one of the 10 Most Haunted Places in America.

Some of the pictures displayed in the book show anomalies. It’s too bad none of the EVPs that were taken as evidence can be played. I’d love to hear the creepy voices from within.

Ghosthunting Kentucky is our second book to review in the America’s Haunted Road Trip series (The Nashville Haunted Handbook was the first). This one is a little bit different. Instead of listing basic location info and brief backgrounds, this book lists complete stories and detailed experiences related to each location. Each chapter feels like it is a separate entity and has no reference point to previous ones. With this writing style, Ms. Starr sometimes repeats what was previously mentioned (such as identifying co-workers, friends and working relationships with other ghost-hunting groups).

I really enjoyed reading about the old-timey movie theaters, including tales of Paramount Joe (at the Paramount Arts Theater), visitations by little Lucy and The Dark One (at the Historic State Theater Complex) and appearances of the past projectionist who haunts The Kentucky Theatre.

Oftentimes, Starr includes past experiences at certain locations, offering more depth to her investigations. The book is divided by geographic region and also includes a ghost-hunting travel guide, with physical and electronic addresses for more information.

This book is a must-read for paranormal fans and anyone who likes real-life ghost stories!