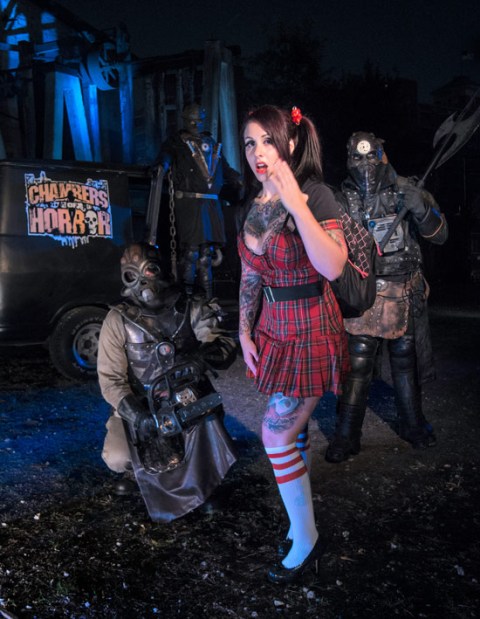 Chambers of Horror is the extremely graphic, adults-only horror attraction in the heart of Atlanta. Located behind the Masquerade, this violent laboratory of the depraved is presented by Gorehound Productions and Rene Arriagada, during the whole month of October and first weekend of November. This horror attraction is in its fifth and best year, yet!

Urban Horror Tours is the host of this excursion, through the rumored ruins of the legendary headquarters/crime scene of the Infamous TORTUREco. Only last year, the building was set on fire by Herr Scudder, during a raid on the property, conducted by the FBI. The flamethrower that set the fire also injured and killed officers, victims and members of TORTUREco.

This is the first time that the crime scene has been opened in over a year. The evidence of human experiments, trafficking and maniacal torture devices are still present at the site and it has become a tourist destination of curiosity. Due to the sensitive nature of the materials found, tours will only be given at night.

To this day, there are still rumors and whispers that a few members of the infamous TORTUREco. survived and have continued on with their tradition of human experimentation that date back to World War II and may still be found dwelling near the rubble of their previous headquarters.

Your team of expert guides will be armed, just in case you happen to encounter these demented urban legends. It has been speculated that they are out to exact revenge on humanity for their fallen brethren, by building an undead biomechanical army. What began with human torture is now rumored to have developed into full-blown twisted perversions. 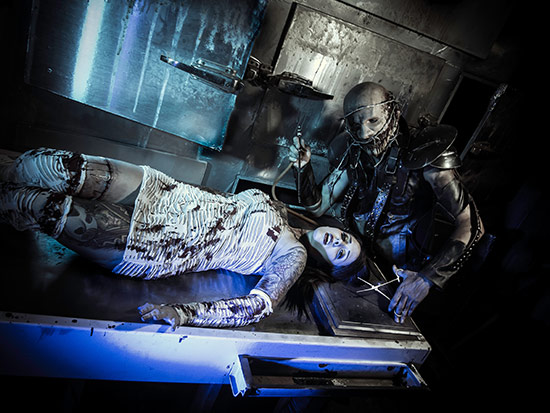 After having a morbid curiosity and taken the tour myself, I can say that members of the TORTUREco. team are indeed alive and extremely volatile. Only traveling through the bowels of the wrecked building will allow you to witness the nerve-wrecking depravity and sinister torture that has been locked away and building up for more than a year.

They’ve been busy rebuilding a bigger, wicked den of sick iniquity with larger instruments of torment. If you were lucky to have escaped with your life previously, this year is a different brand of evil. Dr. Splatter has a whole new bag of tricks and demonic ideas that make it a must-see 2013 horror attraction!

Add to that the Splatter Bar for a cocktail (to calm your nerves before entering the 6,000 square foot crime scene), plus lively entertainment while you wait in line and you have a top-rate haunt that comes in at a steal of a morbid deal — that is if you can stomach it and make it out alive!

Due to the graphic nature of what you might find in the belly of the former TORTUREco. facility, NO ONE under 18 is allowed in the building for this tour/horror attraction.

The attraction is open every night in October and the first weekend in November for your morbid convenience. Depending on the night, ghoulishly evil entertainment has included Atlanta’s favorite freak show Captain and Maybelle (who braved the scene with my crew of local horror fiends), DJ Reverend Andy, the band Crypt 24 and more!

Open:
Chambers of Horror is open seven evenings a week* for the entire month of October and the first weekend of November. No one under 18 admitted.

Ticket Info:
– Free parking on side street or $5 for Masquerade parking lots.
– Tickets available at the door or online at Xorbia
– $17.00 General Admission (Credit cards are not accepted at door)
– $22.00 October 24 – 31
– $27.00 Speed Pass (October 1 – 23) – rush to the front of the line (Limited availability, recommended for weekend visits and toward the end of the month.)
– $32.00 Speed Pass (October 24-31)
– $45.00 VIP Pass – Speed Pass, plus VIP-only limited-edition Chambers of Horror gift and coupon for free drink at the Splatter Bar (Very limited availability).
– Discounted tickets are available as an add-on with shows at the Masquerade. Please check for availability.