Ever since last Sunday’s heart-tugging episode of The Walking Dead, a lot of thinking has been going on here, on The Stump. Proceed with caution, as we’re doing the spoiler dance here. Good to go? Okay.

Glenn will escape his dire situation, hook or crook, and I am willing to put it in writing right here. How? Let’s take a look at some stills, and consider some graphic novel angles that will allow us a view of the options.

As you know, Glenn found himself in a proverbial/literal dead end with Nicholas, surrounded by walkers, on top of a dumpster. Ol’ Nick blows his brains out, and takes a rather physics-defying tumble that knocks Glenn off the dumpster. Exhibit A… 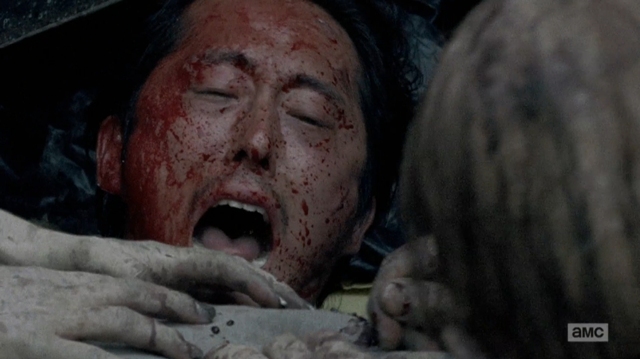 After an obviously rough landing, Glenn is seen in a very tight, forced-perspective shot getting what would appear to be his sternum ripped open and intestines pulled out… of his chest. 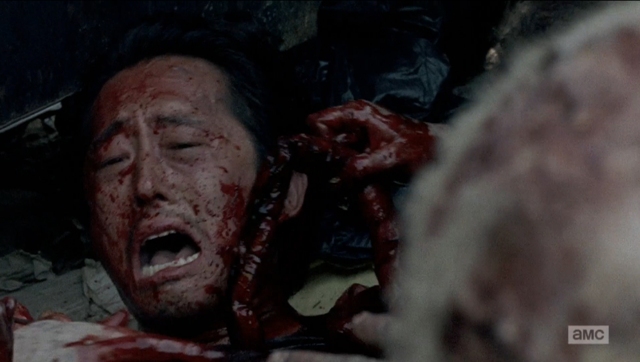 Between the perspective and the anatomical incongruence of the blood and guts, you have to assume his horror is not from the removal of his own innards, but from being front-row for the shredding of the (conveniently silent) already-dead Nicholas. After this slow-motion agony and dramatic musical support, we pull out to a wide shot, where we see the horde reaching in to tear away at the flesh on hand. 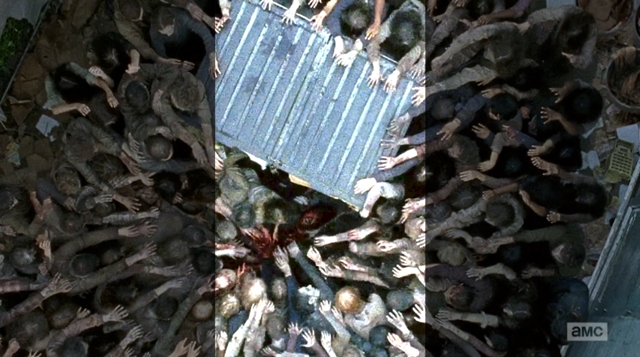 An enhancement of the exposure on the shot shows very clearly that the zombie hands are fiddling about a good 10-12 inches above the plane of the ground and Glenn’s horrified face. The walkers are not bending or leaning enough to be piled on at ground level.

Also in this wide shot, we see how close Glenn is to the dumpster. He could easily reach up, pull himself under it, and regroup in his typical hyper-survival style. We need this, as his true fate from the graphic novel would make for a much more heartbreaking death and much more challenging television.

Glenn needs to live on, to meet Lucille… face to face, if you will.

I predict he will live on. He will survive, through some combination of the dumpster and the already proven tactic of being concealed, if covered in guts. There is a reason the post-show coverage on Talking Dead was so unique and cryptic. I applaud AMC for not simply allowing the talk show to be a work (a term in the wrestling business, for when others — such as EMTs — get in on the “selling” of an injury). Keeping the journalistic independence, as an observing entity, was the right play and the continuous open-end is a fun addition to the cliffhanger.

Glenn will return and I am confident he will live on to meet Negan and his little friend when the time is right, and the fangirls have comfortably dried their first round of tears. You read it here. Mark the date, so we can saw “I told you so.”

Lucas Leverett Co-Founded the Middle Tennessee Anime Convention, CREATED Geek Media Expo, AND OVERSAW A REVITALIZATION of the Nashville Zombie Walk. Lucas is a veteran staffer at Dragon Con, co-founded and Co-Chairs the Nashville Mini Maker Faire AND SERVES ON THE BOARD OF HYPERICON. He resides in Nashville, Tennessee with his family.