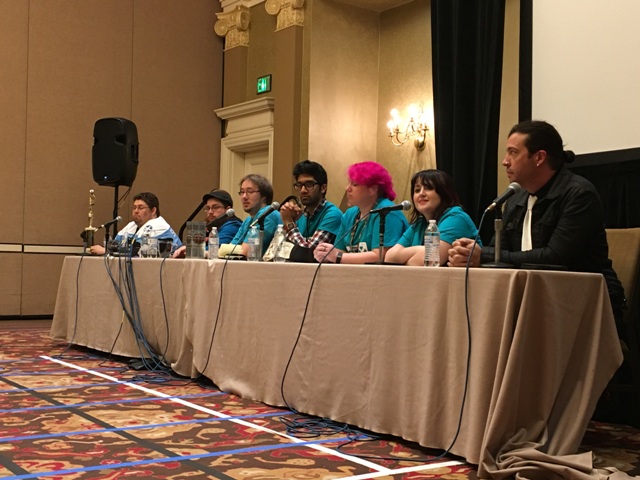 Geek culture and genre fans in the region recently had the pleasure of attending the seventh installment of one of Nashville’s local fan-run conventions, the Geek Media Expo. Overall, the vibe seems very positive from most who attended. To this former con-runner, it does too. Not what you expected? Then perhaps some insight lies herein.

“But, Lucas, how is appropriate for you to review a con you created and once headed? Don’t the last couple of years of con-politics taint your view?” No. Not really. If anything, those events inform the optimism with which I am approaching this. See, GMX had a lot of good. Very little “bad,” — matters of opinion for the most part — and since the ugliness of now-absent interim mismanagement has been very fortunately removed from the con’s equation, I decided “meh” was more appropriate. There is no more “ugly” in the Geek Media Expo.

There is a one-word answer in this respect: People. Fan-run conventions, unlike their corporate profiteering counterparts, are very rooted in the community. The team currently heading GMX puts great value on the peers they attract to the event and fan involvement. Events are, for the most part, homegrown and of/by the fans. From panels to the arguable heavyweight champ of the weekend — The Geek Slam — programming seemed to be very much a product of the fan community itself, and that’s a good thing.

With a huge jump in space, the move to the Music City Sheraton seems to have been a comfortable expansion. Nothing felt as empty as most attendees seemed to speak about in regard to the 2014 event’s slump in Franklin, at a smaller venue. (Estimates of attendance loss in 2014 reach as high as 1,000 absent previous attendees of the 2013 event.) Spaces would fluctuate in traffic, but even the lobby came back to life almost every time you thought things had died.

One of the best things in the “good” column is the biggest thing I’ve seen this group do since its latest era began, and that is to deliver incredible self-created apps for their events. The GMX app is a wonderful resource and not beholden to some larger event’s cookie-cutter third-party clunkiness. Some fans are still clinging to paper guides, but many seem to have adopted this incredible solution. In a world where DIY is a major element to both saving money and customizing to the particular needs of fan cons, it is a work of art with vast usefulness.

The best factor among “the good” is certainly the spirit of the event. GMX is finally back into loving and capable hands. People with no other agenda than the original fandom love with which it was crafted have taken the reigns. As I said to many of them after the con, “It’s gonna be OK.” That’s huge for a convention that was briefly taken far off course for all the wrong reasons. You don’t get a vibe from this team that their intent is less than noble and it showed in many aspects of the weekend.

While the financial outcome of an incredibly risky jump into a larger venue (a contractual hand dealt by said now-defunct leadership from 2014) has yet to be seen, the organization seems well-situated to gain control of the scenario and continue with what was, at many points during the year, an event that many fans felt might not happen at all. The positivity coming out of GMX this year bodes well for the event gaining steam in a venue that seems to be “tolerating” it for now, while they regain footing. If that happens, great, but if it does not, there may be a drag on the experience.

One of the current struggles seems to be the once-vibrant nightlife. This is a combination of leadership, whose vision and emphasis is a bit different, and the venue’s constraints. Hopefully, this once-signature element will be allowed to return by all parties. It is clearly what the fans want and was a foundation to the early success of GMX.

Among crowd complaints in the post-con Fireside Chat with staff, there were credible gripes about parking fees, lot management, and communications thereof, lament of the stifled nighttime party scene, some app suggestions and calls for keeping some alternatives, as well as a bit of feedback on improving dealer-room selection and size. The staff, who excels at customer service and staying positive, took each of these in very good stride and we can expect to see them addressed in earnest.

“Meh” is a good way to describe those things that have less to do with the business or spirit of running a convention, but more to do with opinion or personal leadership styles. In my time creating and running these conventions, I had values that I still believe to be paramount: showmanship, brand cohesion, experience design down to every detail, a tight road-show and street team, etc. Some of these have been largely scaled back or changed, and others have simply been adjusted in how they are executed. Overall, they are “meh,” because they’re just different approaches.

Con-runners go to each other’s shows, and you will find plenty of them with comments, from time to time. They’re probably right for what they’ve experienced, but those ideas don’t always work for everyone. While I will always know in my heart and by my numbers that my formula is the “right way” of things, there are others that work just fine. The convention world can wait for my next project, if they would like a taste of that again. These are no longer my shows.

At the end of the day, when you look at a convention, you have to ask if what you’ve noticed is something that could be the death of a beloved event or just a way that it shifts gears for another driver.

GMX seems to be cruising along in a fun-loving geek-wagon, and getting enough high-fives along the way to power on and remain a vital part of the Nashville fandom landscape. Conventions like this are essential in a world where the public can easily be fooled into believing that the big corporate comic cons are what a convention is. There’s so much more to it, and those who give of their time to keep events like GMX running for the right reasons have earned all the high fives.

We can all agree on that.

Lucas Leverett Co-Founded the Middle Tennessee Anime Convention, CREATED Geek Media Expo, AND OVERSAW A REVITALIZATION of the Nashville Zombie Walk. Lucas is a veteran staffer at Dragon Con, co-founded and Co-Chairs the Nashville Mini Maker Faire AND SERVES ON THE BOARD OF HYPERICON. He resides in Nashville, Tennessee with his family.