Halloween Kills Gets Delayed, So Where Will I Get My My Michael Myers Fix?

Per Matt
For the next few months, you can absolutely forget about watching a newly released film, packed tightly with many other people excited to get out of their house to be entertained by something new. Due to COVID-19 and Coronavirus concerns at movie theaters around the world, Halloween Kills — among other films — will be delayed at least a year (and maybe longer if pandemic conditions don’t improve). So, where else will I get my Michael Myers fix this October?

As soon as the original announcement was made that linked Blumhouse Productions with John Carpenter and the new film’s staff, I was immediately on board for the selective sequel. Having Jamie Lee Curtis, John Carpenter and to a lesser extent, Nick Castle (appearing as The Shape) all working together again, the old guard was immediately brought into a new generation of slasher movies as Blumhouse pressed the fast-forward button on the official storyline at least 40 years, skipping all of the missteps from sequels’ past.

Leading up to the film’s release, I was absolutely hesitant to think this time, the relationship between Laurie Strode and Michael Myers would FINALLY be just right. No longer victims of fan service, these characters would actually feel real. There would be real fear felt by the audience, as well as the victims of the main character, which hasn’t really existed since 1978. And once it was finally released in 2018, Halloween Turned 40 (And Doesn’t Miss a Bloody Beat).

Blumhouse, which made a name for itself as the home of microbudget films that generally rake in tens of millions of dollars at the box office, finally got the chance to apply the company’s formula to well-known characters. Steering clear of Franchise Syndrome, together, filmmakers old and new, created something with a cumulative worldwide gross of $255,485,178. I’d say it was pretty damn successful among horror aficionados in particular, if not theatergoers in general… enough to warrant the announcement of not one, but two more selective sequels. Halloween Kills was originally scheduled to open on October 16, 2020, with Halloween Ends tentatively written into the Friday, Oct. 15, 2021 slot.

With primary filming already finished, one can only assume all that remains to be completed on the film is video editing, sound and music. That work will have to wait, as the audience will not be around to witness the movie’s release. Kills will now take over Ends‘ tentative date, which is more than a year away. I can’t say how much that saddens me, with so much of the goodwill created by the last release bleeding over to what was expected to be this year’s release. I’ve got to believe there will be even more anticipation with another year of build up, and can only hope that Blumhouse and the other filmmakers don’t blow it. 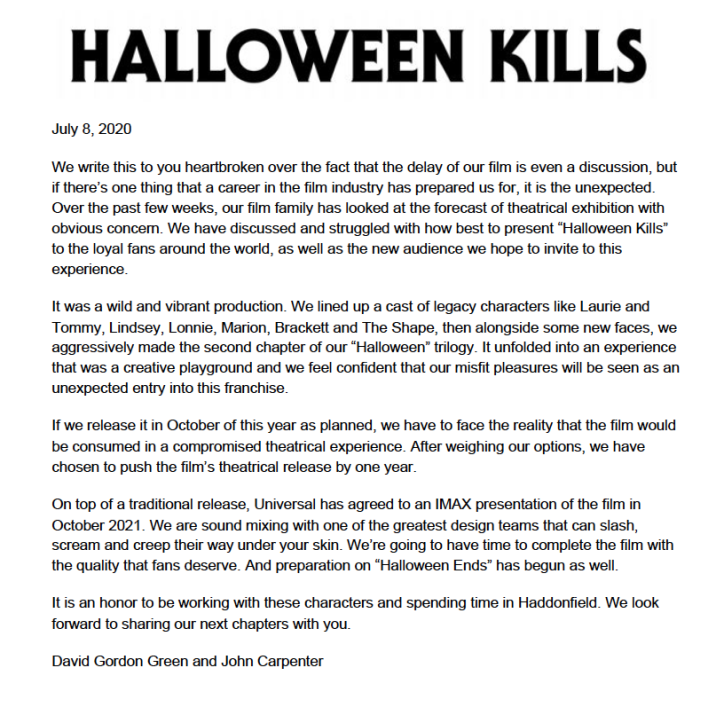 Yesterday’s announcement was a good first step toward building goodwill of the film’s fans. Knowing that everyone within the theater will watch it together — not apart — is key. It’s even more important that the film isn’t rushed into theaters with subpar audiences, literally fearing for their lives. (That actually sounds like a killer concept: Horror fans risking their lives to watch the latest horror release in October…) The idea of watching Kills in an IMAX theater, which is even bigger and better in scope, size, sound and so many more details is the cherry on the top.

With the official announcement, the film’s first teaser trailer was released, much to Laurie Strode’s dismay. In terms of dealing with Michael Myers, clearly she hopes to “…burn it all down,” figuratively and literally. After watching and rewatching the teaser, I meandered into the Youtube channel of a fellow fan who listed every single surviving character from Halloween (1979) and Halloween (2018), who have been both rumored to return, as well as confirmed. Now, I’m very hyped to see this film.

So, to answer my open-ended question, I really don’t know where I’ll get my Michael Myers fix in October. Maybe FearFest will actually be good this year (What Happened to AMC’s FearFest?). It’s totally possible that the second season of Eli Roth’s History of Horror will be even better than the first. Hopefully, COVID-19 won’t delay AMC’s finishing touches to that limited series, because all of us fans who love to scream and shudder in the dark need something to look forward to. Maybe it’ll be found elsewhere, but it definitely won’t be found within movie theaters in a mere three months.