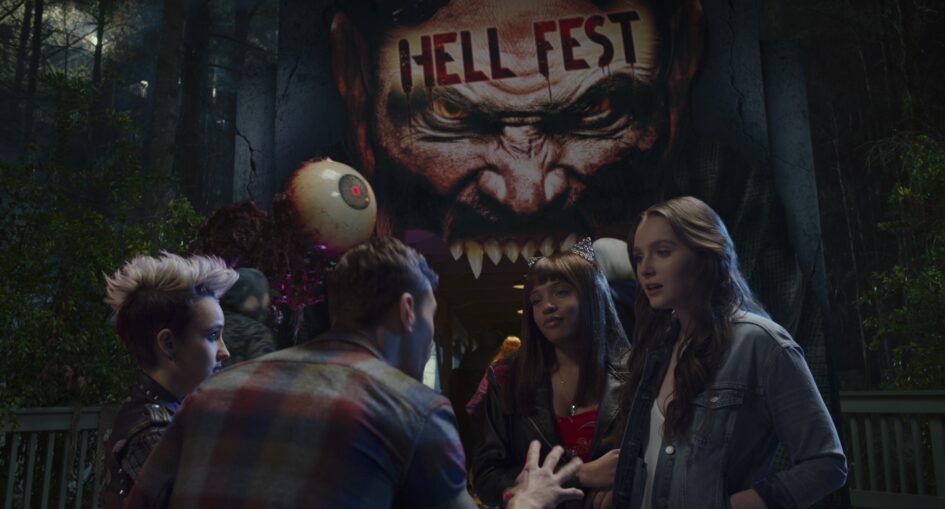 Brought to life by a producer of The Walking Dead, Hell Fest features a story where a masked serial killer known as “The Other” turns a horror-themed amusement park into a meta bloodbath. It’s not too difficult to confuse this one with Blood Fest, as I did, but both films merit their own slasher street cred. This is My Guilty Pleasure.

When an out-of-town college girl joins her childhood best friend and her crew for some jump scares, they never realized they’d be a couple of killer Final Girls in their own horror story. I don’t want to be overly critical about the main characters here, but their backstories never really matter and neither do they, as their main importance seems to be nothing more than fodder for the unusually focused Big Bad, for no other reason than to have been lookie-loos at the wrong place at the wrong time.

The more interesting person, at least for a little bit of time is Stephen Conroy’s character. Producer Gale Anne Hurd must have really enjoyed working with Conroy on TWD, where he appeared as a stunt double for a variety of characters. She must have thought the Big Bad must be seen and not heard, kind of comparing his The Other to Jason Voorhees in Friday the 13th. Honestly, the way Conroy’s character is written, he can be viewed simply as a creepy stalker with a weapon. There’s not a whole lot of depth to him.

As an anonymous, masked Big Bad who never truly speaks (eventually surviving the finale), I wondered aloud if this really was good screenwriting or was it just being too lazy on the filmmakers’ part? Clearly this is a low-budget film and slashers have a different breed of serial killers, but there’s no such thing as too much clever dialogue. The Other is absolutely no Freddy Krueger. And he’s absolutely not sympathetic at all, because he never speaks or attempts to describe his reasons for anti-social behavior. Would flashbacks have helped? They couldn’t have hurt, but something is clearly better than nothing (and that’s coming from someone who normally despises that plot device). There really is no reason to cheer for or against him.

I really think this killer could have been so much deadlier (and clever), had he spoken, and was given a reason for his violence, but hey, that’s just me.

Hell Fest does feature a superior set design, though. Many of the costumed characters interacting with customers are actually from Netherworld, Atlanta’s biggest haunted attraction. Their costumes are intricately designed and look fabulously scary for all the right reasons on the screen.

Director Gregory Plotkin is better known as a hard-working editor, having worked on a variety of Blumhouse films, as well as World War Z. It seems like he doesn’t have a lot to work with here, in terms of script and budget, but I guess he somehow does a serviceable job. I wouldn’t say Hell Fest is an instant classic, but it does have a few fun moments, including a Brundle Fly secretion that made me want to rewatch the 1986 remake of The Fly. It seems that I have missed seeing Jeff Goldblum in less mainstream movies, way before his appearances in Jurassic Park, Independence Day or Thor: Ragnarok. What would it take to drag the actor, kicking and screaming, back to the horror genre? Obviously this movie would have been way too lowbrow for his tastes, but I’d clearly like to see him return to his roots.

That may be my biggest takeaway from this film. Your move, Goldblum. I’ll be eagerly awaiting to see you elicit more R-rated scares. At least his characters, good or bad, always speak. And that is a good thing. Don’t you ever forget that, Hell Fest.