My Spy Proves That Dave Bautista Is No Arnold Schwarzenegger

Growing up, Arnold Schwarzenegger was the quintessential action movie star. Basically, if you wanted a strong, muscle-bound hero who just oozed charisma, Arnold was your man. Starting with Conan The Barbarian, I was hooked on him. I remember my mom asking me what I wanted one time and my response was, “To crush my enemies, to see them driven before me, and to hear the lamentations of their women.” I was immediately grounded from that movie, but my love of the Austrian strongman continued.

Today, there are many strongmen in the film business. A few of them got their starts from my second favorite passion behind films, and that is professional wrestling. Names like Dwayne “The Rock” Johnson, John Cena and even Hulk Hogan have used their fame from working in the WWE to the silver screen. And almost all of them started off in action films. Their ring work translated very well into movies, in most cases leading to big-time success.

Dave Bautista is a former WWE wrestler who has made the transition into film. Back in 2012, Dave broke out on the Hollywood scene with his portrayal of Brass Body in The Man With the Iron Fists. His role in the film led to being picked for a part in Riddick with Vin Diesel. Dave’s work with Vin Diesel led to probably his best-known character, that of the bumbling superhero Drax The Destroyer in Marvel’s Guardians of the Galaxy franchise. Dave showed that he could play a more comedic role, making Drax one of the most beloved characters of the GotG universe.

My Spy is the latest film starring Bautista to hit theaters. Dave plays a CIA operative named JJ Cena (obviously a rip on fellow WWE superstar John Cena). JJ fails in a mission to salvage plans of a nuclear weapon during an undercover bust gone wrong. He is reassigned by Director Trang (Ken Jeong) to a surveillance-only mission, watching over Kate Newton (Parisa Fitz-Henley), a widowed Chicago ER nurse and her 9-year-old daughter, Sophie (Chloe Coleman). Paired up with a bumbling IT analyst named Bobbi (Kristen Schaal), JJ just has to ensure that they are not contacted by Sophie’s uncle, a man named Marquez (Greg Bryk), who was the original focus of the botched sting that landed JJ in this mess. However, once JJ is uncovered by Sophie, she uses her knowledge of his job to blackmail him into helping her fit in with the kids at her school. 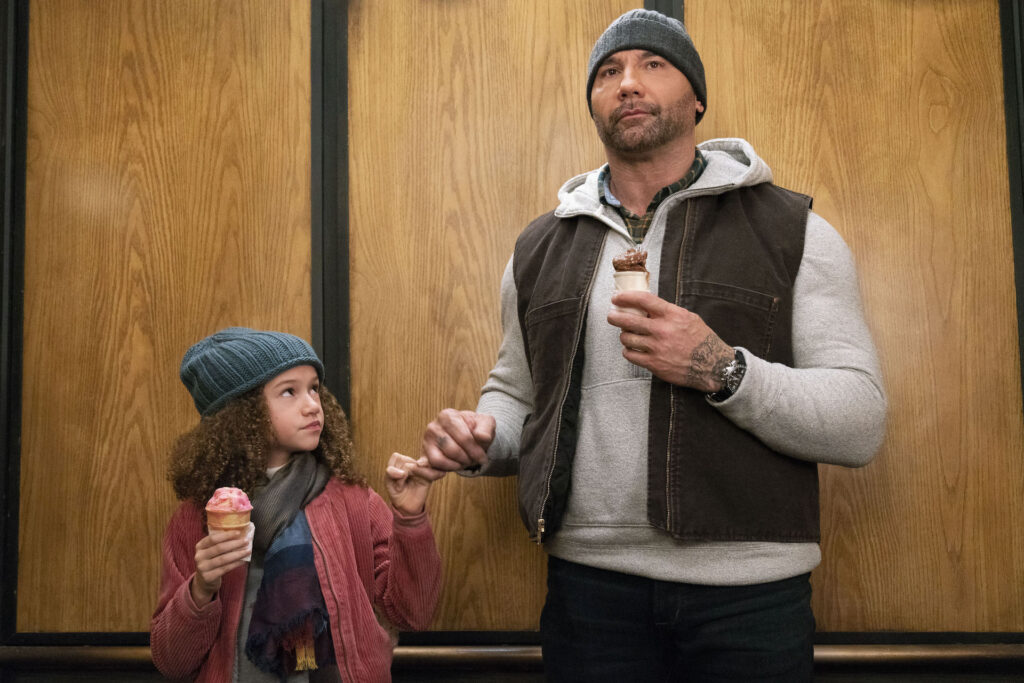 From the synopsis, My Spy looks very much like one of my favorite Arnold Schwarzenegger films, Kindergarten Cop. In both films, the main star is on a mission to watch over a woman and her kid. They both end up falling into a romantic relationship with the mom, which jeopardizes not only their duty, but also their jobs by getting too close. And in both films, the child and the hero form a tag team of sorts, where they have awkward moments, usually detrimental to the hero, but form a father-child dynamic that was missing from the kids’ life before the hero fell into it.

However, Kindergarten Cop has one thing that My Spy desperately lacks: comedy.

Dave Bautista works well when he is not expected to carry a film. His interactions in films like Guardians of the Galaxy with the other members of the group are extremely funny. His banter with Chris Pratt in those films feel natural and the comedy just flows pure. But when Dave doesn’t have a strong actor to work with, like Pratt, he flounders. My Spy has exposed Bautista as a great co-star, but definitely not the leading man when it comes to action comedies. His lines came off so forced, I felt like he was constipated through the whole film. Nothing he said was believable, and he almost seemed robotic. His emotionless regurgitation of the script was boring and uninspiring. Even when trying to be funny, it just did not work.

My Spy can blame both Dave Bautista and the writers for this horrible mess of a film. The only truly funny parts came from Kristen Schaal’s character. She begins the movie completely enthralled with JJ as a master spy, but slowly changes her glee to sarcasm when his actions jeopardize the mission and her job. It is once this transformation begins that viewers get some of the better jokes in the film, and honestly the only one I found anywhere near funny. Most everything else in the movie felt completely unoriginal. I found myself even thinking, “What would be the most obvious thing in this scene that someone might think is funny?” and within moments the character on screen was saying it. It is lazy writing, paired with subpar acting that hurts My Spy to the point of almost being unwatchable, let alone unenjoyable.

Normally, I like to give films some credit. But in reflecting on My Spy, I find nothing redeeming about this film, except maybe it is only 90 minutes of run time (mercifully). My Spy earns a dismal one out of five stars in my review. Bautista has the tools to be an action movie star. Hollywood just needs to avoid making him the lead man until he can prove he has what it takes.