Halloween Must See: The Cabin in the Woods 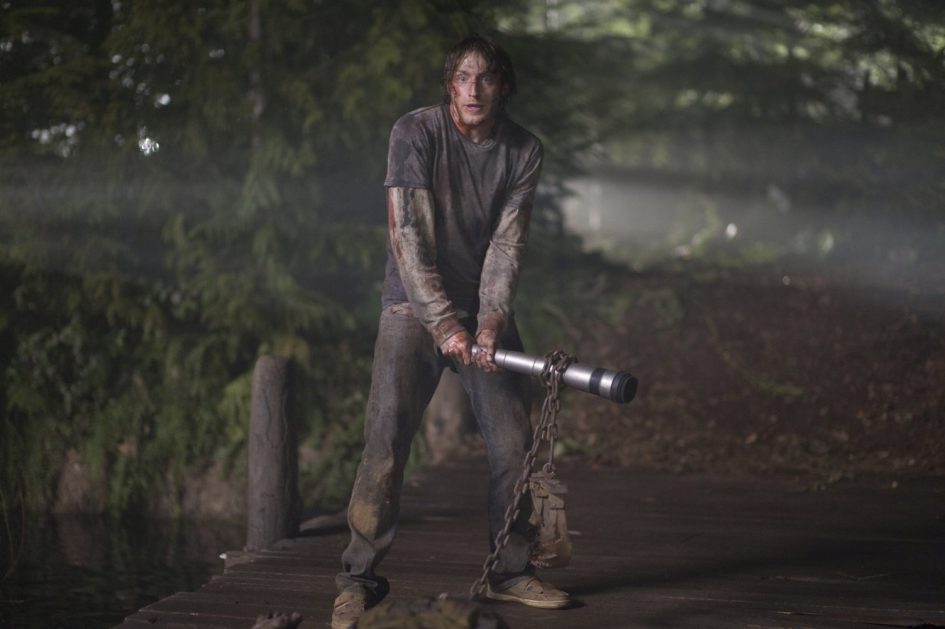 The Cabin in the Woods, directed by Drew Goddard, may be one of the most important horror films ever made. I know, this is a grandiose claim, especially for a movie that some people wouldn’t even consider horror, but hear me out.

Cabin is a film that serves many functions, each to their fullest potential. This is a movie that manages to create a deep and meaningful commentary on the state of horror, while simultaneously creating one of the freshest, most original entries in the genre ever forged.

But, everything I just mentioned about the movie is completely predicated on its twist. So, spoilers ahead!

Cabin is really two separate stories. First is your prototypical “cabin in the woods” story. A group of friends heads out to party for the weekend. Bad things happen to them. You’ve seen it a hundred times. But second is the film about the high-tech shadowy cabal that manipulates events, so that the group of friends is slaughtered.

The cabal’s job is to sacrifice this group of college kids to ancient Lovecraftian gods. They ensure that some sort of supernatural evil is unleashed, and that this slaughter occurs to please these “ancient ones.” And once this evil is unleashed, they keep manipulating events for the entertainment of the gods.

Why is this important? What is is so ingenious about this setup? We, the audience, are the ancient ones. The cabal are the filmmakers. The audience demands blood gore, nudity, and character archetypes. We are not satisfied until we get these things. And if a film strays too far from the formula? We rise up, decrying it as an angry god would. So, the filmmakers go out of their way to ensure that things happen the way they are expected to.

And that is just a taste of how meta the film is. The Cabin in the Woods is also a retroactive explanation of every horror movie that you have ever seen. It is a functional prequel to every. Single. One. Ever wonder why characters split up when they should obviously stay together? They’ve been dosed with gas. Why didn’t she keep that knife with her? A small electric shock made her drop it. They even manipulate the group before the your film started, dosing the drugs that the stoner has brought along, or treating the hair dye of the “blonde bimbo” to make her seem even dumber.

And this groundwork, realizing that Cabin fits into the story of any other horror film, lays the groundwork for the best set-piece in the movie. Because, you see, unlike the teens in Friday the 13th, two survivors get a peek behind the scenes. Dana and Marty survive the onslaught of the Zombie redneck torture family (an antagonist that seems a safe choice for such a bold film — until you realize that stereotype is the point – more on that in a moment), only to find their way into the cabal’s underground lair / lab / what-have-you. Once in this underground lair, you see that it is basically a giant holding pen for any type of monster you can imagine: giant snakes, killbots, Zombies, ghosts, torture demons… anything. Any of these monsters could have been summoned by the group in the cabin.

So far, I have mostly been pointing out how Cabin took cliches and used them to startling effect. That doesn’t mean the filmmakers aren’t afraid to shake things up. A heroic Chris Hemsworth gets a rousing speech, and hero moment, only to unceremoniously get splattered against an invisible barrier. Well, this movie, that, until this moment, utilized a seemingly uninspired take on Zombies, unleashes every one of those other monsters. The holding pen is opened and in a dazzling 10 to 15 minute sequence, every movie monster you can imagine runs amok in this underground… place. It is as glorious as it sounds.

And lastly, lest I forget, this movie was co-written by Joss Whedon. As such, there are moments of sheer hilarity. So many, in fact, that is why it can be hard to completely classify this as a horror film. But if it’s Halloween, and you haven’t seen it, make The Cabin in the Woods a priority.