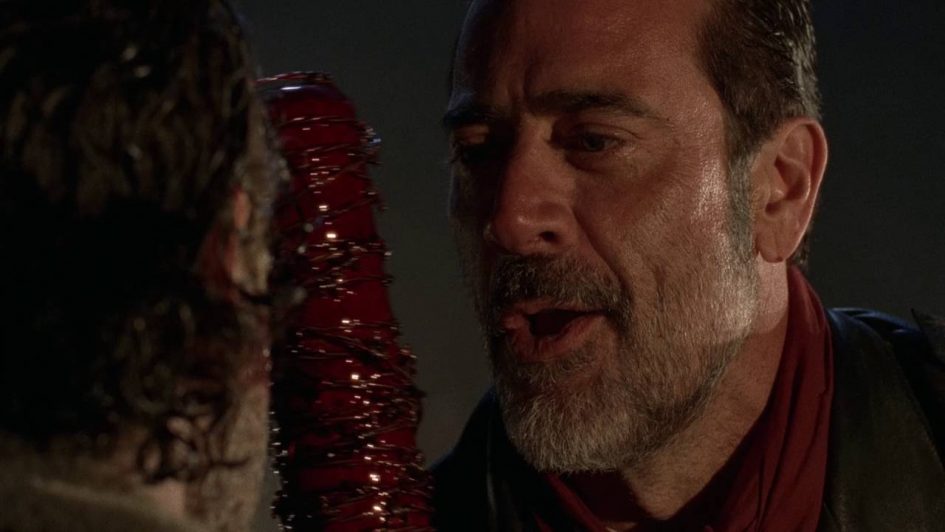 When one door closes on The Walking Dead, another one opens.

More like two doors closing, as the fates of two main characters were revealed in the season premiere, The Day Will Come When You Won’t Be, as Negan finally makes his presence felt.

Season 7 got off to a bloody start, promising what looks to be the most messed-up season to date. This one will be much more extreme than all the others combined. Last year’s cliffhanger was finally resolved: Who dies? Leaving the audience on pins and needles throughout the entire episode, the deaths of Abraham and Glenn were eventually revealed, but not before the episode’s before-and-after framework.

It was bloody, brutal, gory and emotional as Negan, the newest and possibly the greatest villain of The Walking Dead Universe, finally made his introduction. In case you didn’t notice, he’s crude, he’s rude, he’s a psycho who rules by fear, manipulating people into thinking they need him for protection. Negan’s main goal, which was revealed in this episode and looks to continue throughout the season, is to break Rick down, not to kill him. Everyone has a purpose on this TV show and Negan needs people to both fear him, as well as provide for him. He requires his people to collect supplies for him, in exchange for the protection provided by himself and The Saviors (Negan’s Gang).

One trademark of Negan is his colorful language. In the graphic novel, he practically speaks no other words than f-bombs, used creatively in a variety of ways, which was greatly cleaned up for basic cable. While toning down this character was be expected, it also felt like this small-screen version was more vulnerable. Maybe this is why the violence factor was ramped up to the extreme, as not one, but two characters were beaten to bloody pulps by Lucille (Negan’s baseball bat wrapped in barbed wire, which is also his unusual attraction).

Abraham clearly portrayed the muscle of Rick’s Gang, while Glenn represented the heart and the conscious of the group. Choosing to kill off Glenn was the easy choice, which is shown in the comic storyline (incredibly, the TV show got the eyeball-popping scene very close to that in the graphic novel), but killing off Abraham felt like it was thrown in only to keep the audience guessing. Throughout the last few seasons, Glenn was pushed into the background of Rick’s Gang, feeling no longer relevant when Tyreese joined on, but since his departure, Glenn would briefly return to the spotlight for a few episodes, before practically disappearing, once more. Abraham, on the other hand, received a major push in last year’s storyline, as he ditched girlfriend Rosita Espinosa and seemingly settled down with Sasha, while questioning his own mortality. While Glenn was our favorite character of the group for the longest time, his death has been foreshadowed for a long time, now.

Surely, there will be more twists down the road for the show, as it departs even more from the comic mythology. In the graphic novel, Negan tried to avoid using guns when dealing with walkers, mostly using Lucille as his primary weapon, so that was a departure of the character. One scene we were hoping to see was Maggie’s beatdown of Rick after her husband’s death — which was incredible in the graphic novel — but that never happened on the small screen. Sadly, she only freaked out, which was far less impactful.

Two new twists that we were encouraged by: Daryl taken hostage and Negan forcing Rick to chop off Carl’s hand, before stopping him at the last moment. Since Daryl exists only on the TV show, that plot could feasibly go into any direction imaginable, not held back by a previous storyline. But the more intriguing aspect was Carl possibly losing an arm, hinting at Rick’s character of the comics, who does lose his right hand. And according to Robert Kirkman and Scott M. Gimple, the showrunners are not ruling out chopping off Carl’s arm in the future. Make it so!

One comic storyline that sadly won’t get fully explored in the TV show is Eugene and Abraham’s rocky relationship. The guys had issues wrapped around Rosita (whose character is severely underused and wasted on the TV show) in the graphic novel, which sadly won’t be seen on the small screen, along with more of Abraham’s crazy one-liners, which were always hilarious.

On a rainy, live episode of Talking Dead following the season premiere that was filmed in the Hollywood Forever Cemetery, the entire cast reacted to the aftermath of the season premiere, providing a ton of emotions in the 90-minute program. Not much new was learned on the reaction show, but it was nice to get the actors’ perspectives of their characters.

Really looking forward to finding out what else this season has in store!