HAuNTcon 2017: A Preview of the Nashville Haunt Tour 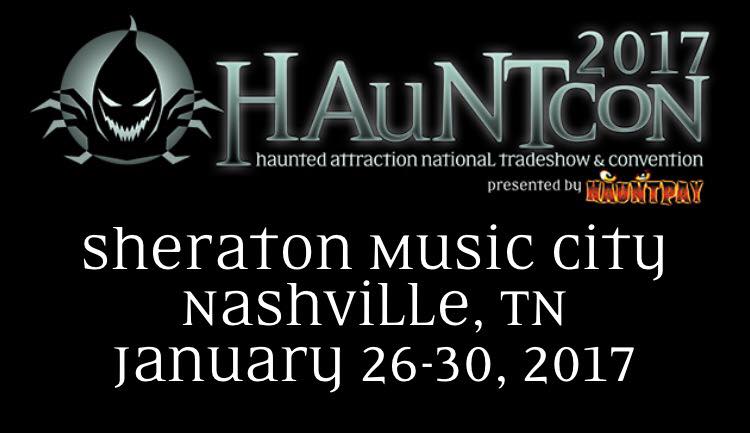 This edition of #HauntLife is dedicated to the upcoming HAuNTcon 2017. Taking place in my stomping grounds of Nashville, TN on January 26-30, the Haunted Attraction National Tradeshow and Convention is one of the largest conventions in the country devoted to haunters. What makes HAuNTcon truly different from other shows that happen throughout the year is that this one is open to the public. Other shows, like Transworld, only allow industry professionals to attend. So, HAuNTcon truly is for everyone who loves anything Halloween related.

Each year, HAuNTcon sets up shop in a new city. Last year, Huntsville, AL was the choice site. This year, the team that runs the show chose Music City, USA. And when they choose a city, they choose to do a tour of the top haunted houses in the area. And the choices this year are Slaughterhouse, Haunted Hell and Nashville Nightmare. Since many who may be reading are not familiar with these haunted attractions, let me give you a brief history, as well as what you should expect from the tour.

The haunted house tour begins on Friday night with Haunted Hell. Owned by the Warner family, Haunted Hell is part of a series of detailed professional haunted houses, beginning with the original Devil’s Dungeon, including Death Row and Haunted Hell Clarksville. Haunted Hell opened its doors in 2012, and has already earned the respect and admiration of many experts in the haunt community. Located in an abandoned bowling alley at 3930 Apache Trail in Antioch, TN, the haunt filled 22,000 square feet with gore, mayhem and the stuff of nightmares. According to Patrick Warner, “Haunted Hell invites HAuNTcon guests to walk through the grueling and dilapidated landscapes of the infamous ‘Hell Meade Estate.’ Then travel through the twisted Medical facility, followed by many new secrets. With an additional nine scenes completely renovated for HAuNTcon, we’ve added many new animations and characters to make it the most extreme experience possible.”

The following night, guests will have a chance to tour the haunt I work for, Nashville Nightmare (located at 1016 Madison Square, Madison, TN). Owner Brad Webb has turned this 2010 upstart haunt into one of the top haunted attractions in the nation. Within its 50,000 square foot mega-complex, Nashville Nightmare will treat visitors to four separate haunted houses. Two houses from the previous season, Horror High and Industrial Undead, have had some small changes to them. But the real changes that will debut (in a small portion) are in the original building. Fairy Tale Hell has a new route and has been extended, while the haunt originally call Night Terrors is going under a metamorphosis into its future incarnation. The name is still under wraps, but it adds a whole new element to the thrills of Nashville Nightmare. All guests will get to see the initial changes and are invited back to see the full unveiling during the Halloween season. It’s something that you won’t want to miss.

And finally, the haunted host of Sunday night will be Slaughterhouse. Slaughterhouse, now located at 3445 Lebanon Pike, Hermitage, TN, is Nashville’s longest-running haunted attraction, opening its doors for the first time, way back in 1986. Throughout the decades, management has changed and now this prized jewel of Tennessee haunt lore is owned by scream actress Stacey Dixon. And ever since she took ownership, things have gotten even better for Slaughterhouse. The haunt not only has upgraded its special effects, but now has one of the most talented makeup effects teams in the business. When asked for comment as to what to expect from Slaughterhouse at HAuNTCon, Stacey had no comment. This alone piques my interest to see what the Full Moon team behind this great attraction has in store on Sunday night!

While the haunted house tour is a must for any Halloween or horror fan, HAuNTCon, itself, is going to be the main star this weekend. Vendors from all over the country will be on hand, selling to both the professional haunted attraction owners, as well as the home haunter in all of us. And each day, seminars will be held in at the convention, letting you learn the secrets of some of the industry’s top professionals. I will even be on hand Sunday afternoon, lecturing on how 3-D printing can benefit both haunted houses and escape rooms. And all events are available under one roof (except the haunt tours, of course).

So, if you are in Nashville this weekend, January 27-30, be sure to get your ticket for HAuNTcon. Admission to the show, as well as tickets for each of the premium haunt tours, are available HERE. The #HauntLife is going to be strong in the Music City over the next few days. Be sure you don’t miss this chance to attend one of the best conventions around!

Enjoy the #HauntLife until we meet again!