James Bond and Wolverine in Deadpool 2? 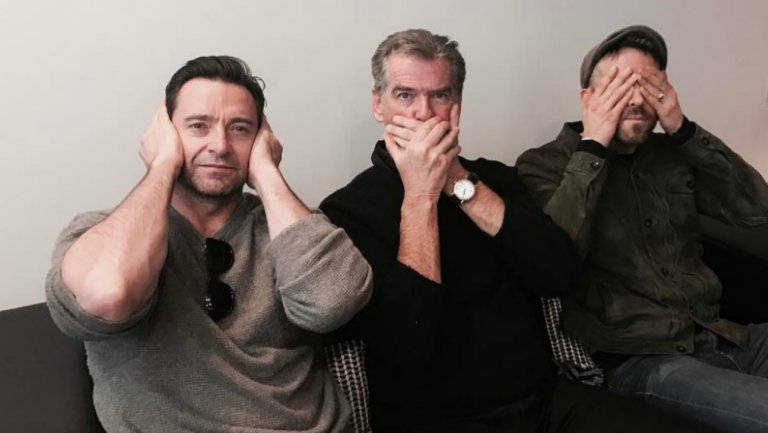 It only took a tweeted photo from Ryan Reynolds and Hugh Jackman to set the geek world’s hearts afire with the hope that Pierce Brosnan will be cast in Deadpool 2 as Cable. The tweet was captioned, “Wolvie. Bond. Wade.” and showed the three stars in the hear no evil, speak no evil and see no evil poses. As much as this team-up would be awesome, I can’t see it happening. At least not in the way the public wants. The geek in me wants it, but Brosnan as Cable does not fit.

The first Deadpool film is nearly on year out from its successful movie release. After a number of legitimate awards nominations (although four Golden Girls is quite the accomplishment), Reynolds was making a run at an Oscar nod. Reynolds is a genius at subversive social-media hype, spending nearly a decade to get Deadpool from concept to screen. The “leaked” proof of concept footage video clip went viral in 2014, and the fan response convinced the studio to go ahead with the movie. On a “budget which would barely cover the cocaine costs on most studio films” the film grossed more than $750 million worldwide. Deadpool is the little death engine that could. And did.

With the film’s success, he has nothing to lose. It seems Reynolds is continuing the Deadpool-esque hi-jinx with an Oscar run. He made out with former Spider-Man actor Andrew Garfield after losing in the Best Actor in a Comedy for Deadpool at the 2017 Golden Globes. And check out Reynolds “For Your Consideration” letter to Oscar voters. Unfortunately the Deadpool film didn’t even get a nomination at the 2017 Oscars.

But this picture. Hype? Teaser? Will Wolverine make it into the Deadpool sequel? Will Brosnan be cast as Cable?

Principal photography on the Deadpool sequel begins in June of 2017. There’s little time left to cast the time-travelling mutant cable, whose appearance was blatantly teased in an after credits scene in Deadpool, the first. Cable will be cast, but it probably won’t be Brosnan.

Cable is a big soldier; huge, compared to Deadpool. Brosnan’s sleek frame doesn’t fit the comic book visual. Cable seems older and gruffer, and while Brosnan’s acting could pull it off, he just doesn’t seem grizzled enough. Nor does he seem American enough. I’ve always heard Cable’s voice with an American accent. Cable is the iconic representation of all the ridiculous disproportioned body types and overly weaponized violent-character designs, borne out of the ’90s comic book scene typical of his creator Rob Liefeld. I could never see Brosnan playing the straight man to Reynold’s absurdity. I think Josh Brolin would be the ideal casting, being able to be both big and gruff and deadpan straight — see Men in Black 3.

But that doesn’t preclude Brosnan from being cast. Deadpool needs a villain. And as we’ve seen in many of the Marvel films, big-name actors are willing to play smaller parts in these blockbusters. Renowned actor Robert Redford played Alexander Pierce in Captain America: Winter Soldier. Also, Benecio del Toro in Guardians of the Galaxy as the Collector. And being cast as a villain or side character allows an actor to become part of the grand Marvel Cinematic Universe, becoming a movie icon, without having to dedicate much if any of their future time in sequels and without being typecast as the iconic characters. If Brosnan is cast, it will probably be for a non-powered villain or a lesser-character cameo.

I highly doubt Hugh Jackman will make a significant appearance in Deadpool 2. He’s been very vocal about Logan being his final Wolverine movie. With the movie’s release in March 2017, Jackman would be remiss to announce an appearance in Deadpool, as it may take some of the finality, poignancy and box office draw to what appears to be Wolvie’s final appearance.

Expect something absurd from Deadpool, with the character using footage directly from Logan. Something in line with Wade having a paper cutout face of Hugh Jackman stapled to his face from the original Deadpool movie. For example: Deadpool in a poor green screen edit superimposing himself in a scene from the Logan movie. Or cutting some dialogue from Logan in a comedic phone call with Wolverine. Or perhaps even having Hugh Jackman appear as himself. This is the perfect opportunity for Deadpool to break the fourth wall.

The Wolvie-Bond-Wade photo seems hype, just a few friends in the same place having some fun. But as The Beach Boys sang, “Wouldn’t it be nice?”