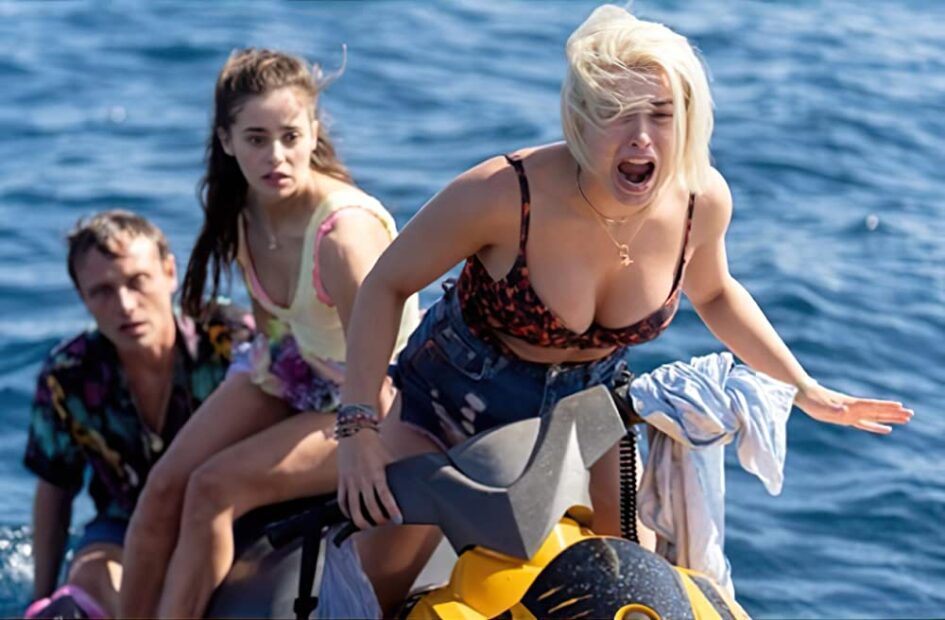 Guess what? We're the Shark Bait!

It’s much too late to discuss Shark Week. Already missed out on Sharkfest, too. And even though it’s a little early for Halloween, there’s definitely enough time to go back into the water one more time before the temperature drops. While Sharknado is no longer a thing, there is Shark Bait!

Warning: Do not confuse this movie with the 2006 animated film, The Reef (also known as Shark Bait in some markets), which might be just as scary, but for different reasons.

As Spring Breakers spend one last night living it up on a tropical beach before heading back to Kansas, they commemorate their trip with one last all-nighter. Still drinking steadily after the sun rises, they make the grand decision to steal a couple of jet skis without thinking things through.

Heading out too far into the ocean, both vehicles collide while playing a game of chicken during their drunken stupor. After the big wreck, an engine stalls, while the other flips, knocking out one driver and breaking the other driver’s leg. Naturally, they’re stranded at sea with no good way to seek help.

This 2022 British survival-horror flick was written by Nick Saltrese and directed by James Nunn. Originally released in the States (Only Briefly!) on May 13th and distributed by Vertical Entertainment, it’s safe to assume I’d never heard of the film until seeing it displayed locally. So, I made it a Redbox night!

If you can make it through the title confusion, this underwater adventure has a decent bite. The special effects are not bad, but our characters’ injuries are gory. Speaking of our main characters, well… they’re a buncha dummies. From the start, a leg-less beggar foreshadowed a shark attack, but no one took him seriously until it was too late. Just about every single one of them is unlikeable (with the exception of Malachi Pullar-Latchman’s hometown star athlete, Tyler). They generally get what they deserve, especially Milly (played by Catherine Hannay), who can’t “swim properly.”

“Every time I listen to you, I end up in trouble…”

Digging past the surface-level shenanigans, Saltrese’s story seems to take equal jabs at ugly Americans, as well as making a statement about binge drinking. Maybe he was trying to admit that friends will eventually cheat on friends’ significant others. Or maybe he just needed an excuse to highlight Hannay’s beautiful body.

As the storyline winds down, our people must try to survive a bloodthirsty killer together, even though they mostly hate each other. There are not really any jump scares here, just the expected carnage.

In a sea of stubborn shark films that boast a bloated body count, I found Shark Bait to be a decent summertime diversion. Is it the best of the best? No, but it’s not the worst, either. And since I had never heard of the movie before watching it, I was pleasantly surprised with the outcome. Give it a chance. It might just surprise you!

So long for now. We’ll be on the hunt for our next Hidden Horror Gem!