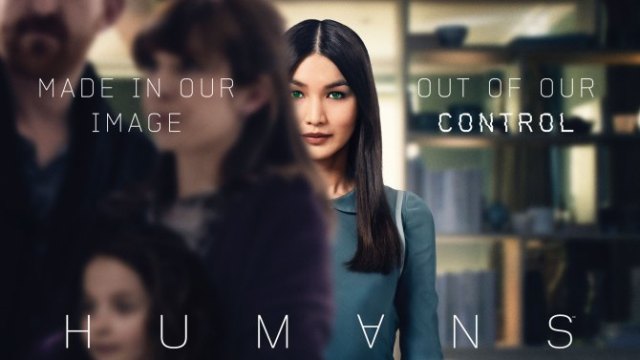 What happens when Synths overcome the human race at the point of singularity? That event may just unfold on AMC’s Humans.

In a parallel world of modern-day London, androids known as Synths move and act like robots, but eerily look just like people. Synths are used for everyday chores and treated as nothing more than appliances.

In the series premiere, Episode 1, a rogue group of Synths is on the lam and in the wild, before a few are captured, reprogrammed and sold. These Synths can think and feel, as if they are “alive.” After purchasing a Synth to help out around the house, Joe and Laura Hawkins begin to notice peculiarities with Anita, not knowing exactly what’s wrong with the android. Laura immediately mistrusts Anita (expertly portrayed by the striking Gemma Chan). And with good reason, by the end of the pilot episode, she has escaped her captors and kidnapped their child.

There are other extraordinary Synths attempting to hide among the robots, including one that can’t seem to hide its true identity, another that’s captured by the government and one more disguised as a prostitute.

How far will these robots go to replace humanity?

The special effects are incredible and these robots appear to have something on their minds (an uprising, perhaps?). Gemma Chan’s acting is incredible and her presence, alone, makes watching the series worthwhile.

Season 1 consists of eight episodes and if the series gets decent-enough ratings, there will be many more episodes to reveal the rise of the machines.

Strength: Robots can do practically anything…
Weakness: Except replace the human race.
WTF Moment: Robots acting like humans. Cats and dogs living together. Mass hysteria.

Notable Quotes:
– “He looks normal.”
– “I was meant to feel.”
– “I don’t want a crappy upgrade.”
– “You’re just a stupid machine, aren’t you?”
– “Their sole purpose is to make our lives better.”
– “Error reading file partition. Data may be corrupted.”
– “Joe, this is the best thing you will do for your family.”