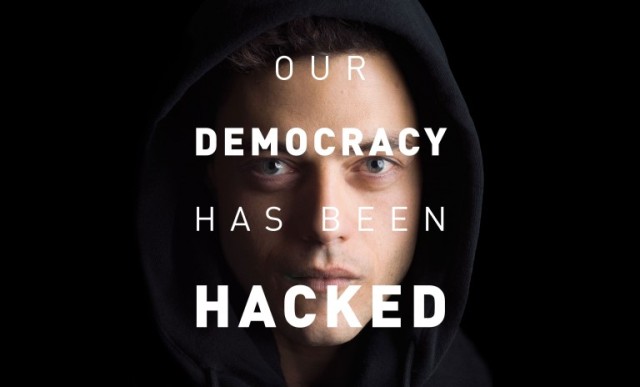 Is it possible to be a hacker with a heart of gold?

Mr. Robot, as a TV series, attempts to find out. Elliot Alderson (played by Rami Malek) is a cyber-security engineer by day; vigilante hacker by night. He has a hard time communicating with people, he’s hooked on heroin and his therapist thinks the Men in Black following him are imaginary. But that’s just a basic description of the main character.

Elliot is torn between using his talents for a paycheck at a job he despises, as well as breaking into his friends’ personal accounts in order to protect them. So, it comes as no surprise when he actually considers joining a group of anarchists that go by the name of Mr. Robot. This group hopes to create a financial meltdown that would permanently erase everyone’s debt, but requires Elliot’s services in order to make it a possibility.

Evil Corp is naturally the corporate overlord in this series and there’s LOTS of pop-culture references in the pilot episode alone, which could become dated and overwhelm future storylines if used too often. Be on the lookout for brief glimpses of Christian Slater, who is the featured villain/superhero of the series, depending on your perspective. Hopefully, he gets more screentime in future episodes.

Malek, as the lead actor, is incredibly creepy (and he always wears a hoodie, so he must be up to no good), so he perfectly fits the character. It’s slightly difficult watching a character with a social anxiety disorder and chronic depression. Sometimes the show feels like it’s mocking his disabilities.

There haven’t been too many movies or TV shows based on hackers, because it’s hard to make a bunch of pre-programmed computer screens feel dramatic. In the past, many have delved into virtual reality, but their stories didn’t hold up in the real world. Mr. Robot takes a different approach. This hacker — as awkward as he is — actually has a conscience, hidden somewhere among his disgust for the real world. So far, he uses his talents for good… and bad purposes. We shall see if the character chooses a side in future episodes.

As the series premiere winds down, the FBI has arrested an Evil Corp executive and the federal investigation has brought in Elliot for possible questioning. Which direction will this revolution turn? Season 1 has received a 10-episode order and Season 2 has already been greenlit, so expect to find out more information in the upcoming episodes.

Strength: Anarchy reigns supreme for all types of hackers.
Weakness: The character can be painful to watch, at times.
WTF Moment: Digging into friends’ personal lives cannot be justified. Hopefully Elliot learns this lesson the hard way sometime soon.

Notable Quotes:
– “He’s too dumb to be bad.”
– “Every hacker loves attention.”
– “I don’t give a shit about money.”
– “Sometimes I dream of saving the world.”
– “There’s not much you can do without a CPU.”
– “If it weren’t for Qwerty, I’d be completely empty.”
– “You want to get high and watch your favorite movie?”
– “Don’t ever make decisions when you’re on morphine.”