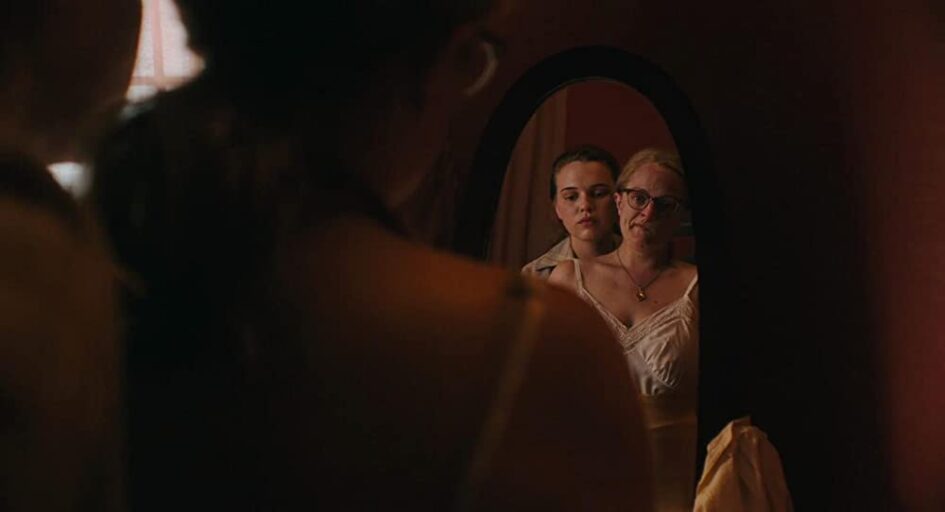 Per Matt
Biopics can be dangerous subjects. On one hand, they can lead the uninformed into believing fictionalized stories of actual people. On the other hand, they can also withhold some major attributes of real-life people, while accentuating others. Sometimes falsely. And here is where I mention Elisabeth Moss’ performance as horror writer Shirley Jackson was the most noteworthy element of the Neon release, Shirley.

Apparently this film — listed as a biography, drama and mystery on IMDb — much like every other major Hollywood release, is loosely based on real life. While the screen version of Shirley Jackson doesn’t have any children and the visiting young family in the film, the Nemsers, is totally fabricated, everything else in the film was supposedly based on a true story. With Martin Scorsese as an Executive Producer, I’d expect nothing less…

Suffering from writer’s block, Shirley is agoraphobic, incredibly rude, barely able to function, can’t eat and goes out of her way to be antisocial. She won’t leave the house and has fired her last maid, so when a young graduate assistant at the local college arrives in town along with his young wife, they’ve already been vetted to help ease Shirley back into society. Inadvertently becoming the housekeeper, Rose (played by Odessa Young), eventually wins her trust and becomes the writer’s muse, along with a brief love interest. And did I mention Rose’s character was totally fabricated for the movie?

Writer’s block is a scary thing; we all react to it differently, but this story goes out of its way to bring Shirley from a recluse to an award-winning member of society. Along the way, Elisabeth Moss soaks it all in.

Moss is totally transformed into a terribly, horrible monster of a person, flirting with death (and her housekeeper). At first, the character seems irredeemable, but eventually she welcomes a change in personality. Marital life is madness… and apparently, so is Shirley (at least a little). In reading Jackson’s wiki, it’s incredibly creepy how similar Moss looks like the real-life author. The character-development arc is great and the actress’ performance is the best thing in this flick, but it really is too bad a feature film centered on the author who created one of the best ghost stories known to man, isn’t even mentioned one time. The Haunting of Hill House is far and away her best-known story, yet it was never included in a biopic about the author? How did that even happen?

I was shocked by that omission, as I would have rather seen a story about its development. Instead, this movie concentrates Shirley attention on a missing college coed. That seems like a very big missed opportunity.

I liked Shirley, but I thought it could have brought in more of the person’s real life into this fictionalized biopic, creating a more well-rounded storyline. Its success should hinge on Moss’ acting skills, which are clearly on display here (and really, nothing else to speak of). 2020 was kind to Moss, with Blumhouse’s The Invisible Man released earlier this year, before the pandemic was in full effect. In that one, she transformed from damsel in distress into a female superhero for a new era. And in Shirley, her range is expanded even more.

I’m really hoping Elisabeth Moss receives recognition for her acting skills in the feature films that were released in 2020. I’ve really enjoyed her genre fare and hope she continues to choose such diverse roles in the near future. Now, that’s a great reflection for the actress.