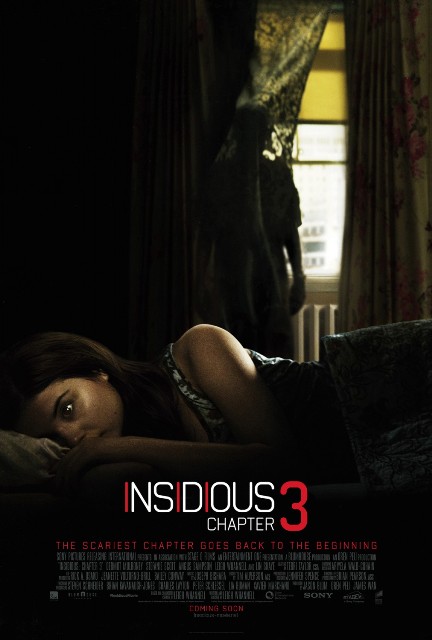 I’m always hesitant whenever a film franchise that I actually enjoy (which is rare enough) swaps out directors in subsequent installments. Sadly, the path of those future movies (as well as their overall quality) always seem to be going down a slippery slope, along with diminishing returns.

Unfortunately, that’s what Insidious: Chapter 3 feels like. No longer a horror movie, but an exploration of grief and loss with supernatural elements thrown in for good measure, series writer-actor Leigh Whannell steps in to direct this prequel. A few years before the Lambert haunting from the original movie, Sean Brenner (Dermot Mulroney) and his daughter, Quinn (Stefanie Scott), suffer from the recent loss of a loved one. Desperate to make contact with her deceased mother, Quinn reaches out to Elise Rainier (Lin Shaye) for help, but she’s still suffering from her own demons. After a series of unexplained events (and creepy footprints), Quinn may have made contact with an evil entity that’s after her soul.

While the original family from the previous Insidious movies is out of the picture, Chapter 3 focuses primarily on parapsychologist Elise Rainer. She’s been terrorized ever since her husband passed away, retiring from the psychic business, but gets rejuvenated by this case (along with the ridiculous ghost hunters of Spectral Sightings, who make a return visit). It’s good to see her character explored a little more, but the surrounding storyline is not very compelling. The mysterious antagonist here is The Man Who Can’t Breathe, who feels more like an afterthought. The character is given no backstory; no motivation whatsoever. He just pops in from time to time, making an inexplicable appearance, attacks Quinn and then disappears. Rinse and repeat throughout the movie. I don’t think the main bad guy even speaks one word throughout the entire film. What a letdown. Making his directorial debut, Whannell missteps by not giving the audience any details, at all, about him.

More creepy than scary, Insidious: Chapter 3 wraps with the prospects of another sequel looming in the air. Shades of greatness definitely shine through the dullness, at times, although there’s no comparison with the original (or with Chapter 2, for that matter). Whatever you do, don’t try to figure out the many plot holes or you might just find yourself lost within The Further.

Strength: Another spooky movie from a great franchise.
Weakness: Unfortunately, pales in comparison to the previous films.
WTF Moment: The ridiculous storytelling of Elise in the dark side had her acting like a superhero, for no good reason.

Notable Quotes:
– “There’s no undoing.”
– “Everybody’s going to die one day.”
– “Loving someone is just delayed pain, isn’t it?”
– “I’ll be waiting in the dark, when the pain finally kills you.”