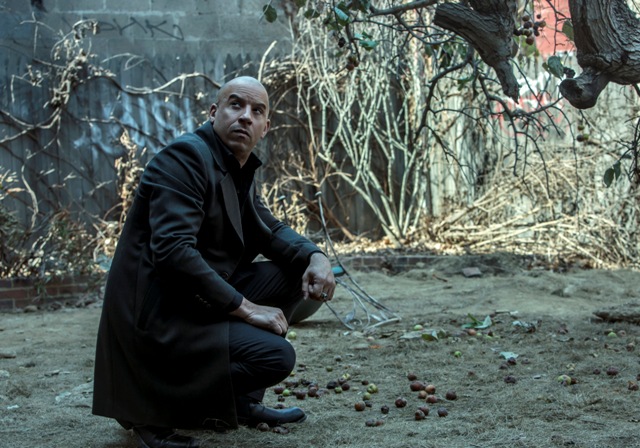 Per Matt
Just in time for Halloween, a film featuring magic and witches arrives at movie theaters, but does The Last Witch Hunter have any heart?

For centuries, armies have hunted down witches — vicious supernatural creatures known for spreading plagues around the world — and for many years, the last all-powerful Witch Queen was considered extinct. But before she died, she cursed her assailant, Kaulder (Vin Diesel) with her gift of immortality, effectively making him the last witch hunter. Haunted by the loss of his family, Kaulder has spent centuries battling rogue witches, but recent events have revealed a strong supernatural menace in the modern-day world that may threaten the very fate of the entire human race.

Even though his character is basically a lone wolf, Vin Diesel is assisted on this hunting spree by Rose Leslie, Michael Caine and Elijah Wood. But don’t let the credits fool you, the main star of this movie is the magic. Everything else takes a backseat, including the actors. Featured throughout the film, there are some great special effects, decent sets and good costumes (with the exception of Diesel’s wig and beard, which are clearly fake), but the story development just takes too much time to hold the audience’s attention. Of course, there are a few action scenes and jokes scattered about, to keep everybody awake, but there’s just not enough of those elements to formulate a complete story.

Diesel spends a lot of time grumbling, often looking away from the camera, being virtually indecipherable. While he may be an action star, he has too much dialogue, here, to hold everything together. And for that, I’m disappointed by director Breck Eisner. If only he could have paced this movie much like his last film, The Crazies — which I thoroughly enjoyed — it could have been a better overall experience. He must be a little rusty, since that movie was released five years ago.

Technically, The Last Witch Hunter is a supernatural action film, but there’s not a whole lot of action in it. There are quite a few supernatural elements present, but overall, there’s just a whole lot of on-screen blah. If the supernatural game is your thing, you may be better off watching a seasonal-themed movie marathon, much like what is currently offered on basic cable.

Strength: Supernatural elements are front and center.
Weakness: Acting, writing, directing are all subpar.
WTF Moment: Valiant is his effort, but this is a bad attempt by Diesel to star in a new film franchise.

Notable Quotes:
– “Who said that a witch can’t hunt witches?”