Is This War of Mine: Fading Embers Worth Buying? 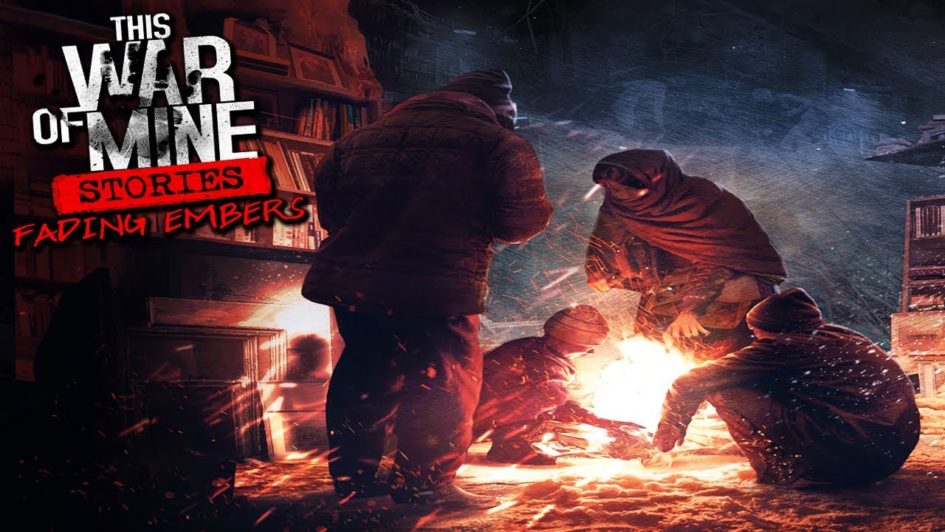 This War Of Mine is a survival game that is available on PC, PS4, Xbox One and other mobile platforms from 11 Bit Studios. Recently, the company released the latest DLC expansion for the game called Fading Embers. I was lucky enough to get a copy of this content, but due to some personal issues going on, I am just now able to get the full review out. Alas, like they always say, better late than never. I do want to thank the awesome marketing team with 11 Bit Studios for not only sending me a key, but also being so understanding.

If you are not familiar with This War Of Mine, let me catch you up. In this day and age, almost every single “survival” game involves Zombies, nukes or some sorta “post apocalyptic” horror that your character finds themselves stuck right in the middle of. This War Of Mine actually doesn’t follow that path and takes a unique approach in representing the people caught up in a conflict they did not want. The survivors find themselves stuck inside a town in the middle of a siege. Military forces have blocked off aid and support for the town, hoping to end a civil war, and food and other resources have become scarce. The civilians must fend for themselves, scavenging items (such as food, medicine and weapons) to survive. The key point of these characters is that they are not survivalists or soldiers or anything else. They are just normal people caught up in a bloody civil war and they have had to learn to adapt.

As you play, you control a group of survivors held up inside a run-down building. It is not safe during the day to venture out because of snipers, so you spend the days trying to either fix up the defenses of your shelter, build and use tools like stoves and radios, and tend to wounds and hunger. Once night comes, you have to decide who you will send out on scavenging hunts, as well who will stay and guard your “home.” On a scavenging hunt, players may encounter other survivors and can choose to interact with them. However, you have to be careful, as they may have ill intent and cause harm to your characters. Night only lasts for a short time, so you have to be quick in gathering materials, because once morning comes, you may succumb to sniper fire on your way back to your sanctuary.

There are currently three downloadable content packages (called episodes) available for the game. The base game is episode one. Episode two, entitled The Little Ones, focuses on how children would be affected by the events of the first episode. Not only do the survivors have to worry about themselves, they have to worry about protecting kids, not just from the perils of war, but also from losing faith and hope in the world. Truly one of the more moving and thoughtful aspects of any game out there. 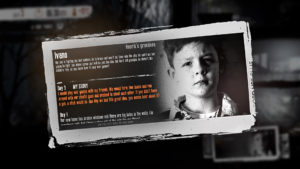 Finally, we come to episode three: Fading Embers. Released on August 6th, 2019, this installment of the game changes the focus of the game slightly. Whereas the previous chapters focused on controlling a group of survivors, Fading Embers takes a more narrative approach by telling the story of the siege from the perspective of a woman named Anja. Anja, like the other civilians in the game, is trapped in the besieged city. Her love of culture and art, though, shapes her choices in that she wants to preserve as many artifacts as she can, hoping that the war will end and these valuable pieces of history will be saved. Along the way, she begins to question her heart, trying to determine if these items are truly important in the grand scheme of things and whether she should focus on herself more.

Fading Embers adds two more playable characters along with Anja, named Zoran and Ruben. It also has expanded the city to include several new locations, new shelters and the museum, where the cultural artifacts are located. Because of the addition of the museum, players are now given the additional choice during scavenging of collecting the art pieces, possibly forgoing collecting necessities like medicine and food. This new dynamic can send the game into thousands of different directions, and puts the player squarely in the driver’s seat of having to make hard choices.

I will have to say that I have never played a game quite like This War Of Mine. Having its roots in reality, it differs greatly from other survival games. Knowing that there are people alive today, currently living in these conditions, hit hard. It makes you question some of your decisions. It is easy to indulge in what life has to offer when you live in relative peace. But this game forces you into decisions that are thinly balanced on the point of a needle. One wrong move and not only could you lose, but you could lose the lives of the others in your party. It can make this game somewhat depressing, especially when you make the wrong decisions and someone dies. Fading Embers adds in the humanistic need to protect their heritage as well, so you have to add that desire on top of all of the other needs in the game.

It is for that reason I give This War Of Mine: Fading Embers five out of five stars in gaming. I also label this as a “Must Buy” game. If you have not had the chance to play it, you are sorely missing out. Do yourself a favor and pick it up. As I mentioned before, it is available on PC, Xbox One, and PlayStation 4, as well as mobile devices. You will not regret this.

If you would like to see the game in action, I will be streaming it from time to time. Just head over to my Twitch channel, tell me you want to see This War of Mine and I will be sure to get it in the queue if I am not already playing it.