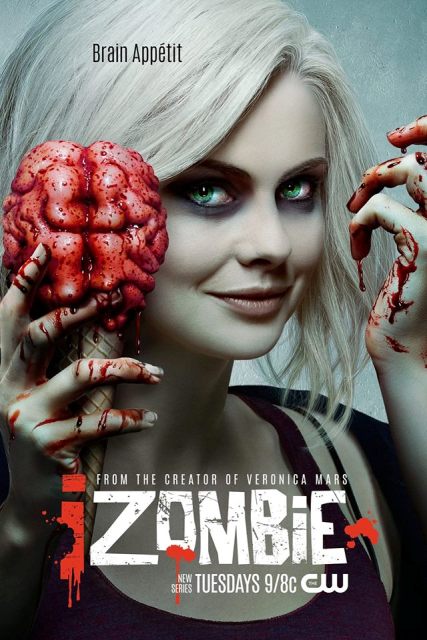 Along lurks an undead TV show for the Young Adult crowd, from the “brains” behind Veronica Mars.

iZombie is a mash-up of a program. Not only is it a supernatural procedural, but it’s also got comedic and dramatic bits, as well. Does that mean it’s a supernatural cop dramedy? Let’s go with that, for now. Adapted from the Vertigo comics series and picked up for a 13-episode first season order by The CW, iZombie approaches the Zombie Apocalypse from a different perspective.

Olivia “Liv” Moore (played by Rose McIver) is a workaholic medical student whose life gets flipped upside down after her fiance encourages her to attend a friend’s party. “What’s the worst that could happen?” Clearly she didn’t realize an inexplicable Zombie outbreak on a party boat was an option. Somehow, Liv lives (get it?) and soon realizes she’s become a Zombie.

The main character and backstory are somewhat altered from the comic-book source material of the same name, but in this medium, the Zombie Apocalypse is derived from a designer drug by the name of Utopium. Not many details are revealed about this drug, so expect more to unravel throughout the season.

Quitting her once-promising job as an intern, she settles on working at the local morgue, eating brains to survive. These unique dietary needs allow her to see flashback visions from the recently deceased, so naturally she has a calling to assist the local police department with the victims’ unsolved crimes. It’s quite a coincidence that this coroner’s assistant has psychic visions and the coroner, himself, used to work for the CDC. Together, these two outsiders attempt to cover up an actual Zombie outbreak. Or are they actually trying to prevent it? Once again, what’s the worst that could happen?

As crazy as it may seem, those aren’t even close to the most bizarre elements of the TV show. Liv’s family and friends notice her attitude change, but don’t realize she’s become a Zombie. There’s that. But why would her former fiance continue to stick around with the ex’s family, yet stray from her? That makes the least amount of sense in this fantasy.

Looking ahead, Liv can only seemingly eat the brains of murder victims, otherwise she’s not necessary for helping the police (and, in part, moving the story along). So, how long until someone actually notices these victims have been de-brained? And when will she get caught?

Airing on Tuesdays, iZombie’s opening credits are drawn by lead artist for the comic-book series, Michael Allred, which is a nice touch.

The pilot hints that Liv isn’t the only Zombie out there. This Zombie Apocalypse seemingly spreads at a turtle’s pace, but expect more moody actors wearing lots of pale makeup to make appearances in the upcoming episodes.

Strength: A different approach to the oncoming Zombie Apocalypse.
Weakness: Many leaps of faith connect the dots to this show’s premise.
WTF Moment: An actual Zombie working at a fake haunted house? Why not.

Notable Quotes:
– “Now I’m mostly hungry… and a Zombie. There’s that.”
– “I’m afraid that if I let it go, long enough, I’ll go all George Romero.”
– “They call death the eternal sleep, but I haven’t slept in five months.”
– “You have all the makings of a nemesis, but I actually kind of like you.”
– “Life’s short and then you die. And then you have to make some decisions.”
– “How often can you say you’ve been changed — really changed — by a party.”
– “If my Zombie movie research has taught me anything, it’s that being part of a horde would suck.”