John Cena is the Buddy You Always Wanted in Vacation Friends

When I am not working on my new haunted house, watching films for reviews, taking care of my elderly mom and kid, and trying to work my day job, I am an avid wrestling fan. While AEW is the current hot thing to watch, I still find myself catching a lot of WWE content.

With shows on Monday, Tuesday and Friday (and the occasional weekend), I am inundated with the WWE. Quality lacks on most of them, but still, I find myself watching as I have since 1984. And in those many years, I have been a fan of tons of talent, including Hulk Hogan, Randy Savage, Stone Cold Steve Austin, The Rock and HHH, to name a few.

But even though I love professional wrestling, one wrestler was always on my “Oh great… another match with HIM in it?” list. And that wrestler was John Cena. I never could get to where I liked this guy. No matter what creative did with him, it just felt so forced. Outside of wrestling, he did a ton of stuff for kids and charities. And while I admired him for that, the wrestling side of him just never stuck. Fans either loved or hated him, chanting “Let’s go Cena” or “Cena sucks” as loud as they could. But I had complete and total apathy for the wrestler.

I couldn’t care less about him. It seemed like he was always going to win, never putting over up-and-coming talent or, worse yet, burying them just as they started to get a fan base behind them. Simply put, I had complete apathy when it came to the top star of WWE during the 2000s.

Like many of the top wrestlers, John Cena has moved on to Hollywood. His career started out bumpy, playing small roles. But soon he started making a name for himself, primarily in the action-comedy genre. Playing with Fire was probably one of my favorites within this genre, where John plays a forest ranger who has to take care of kids displaced by a fire.

But now he is known for his portrayal of Peacemaker in the recent hit film, The Suicide Squad. And soon, the leader of the C-Nation will have his own HBO series devoted to Peacemaker. Hollywood has opened up its arms for the former champion.

Hulu just released a new buddy comedy starring John Cena called Vacation Friends. While on a vacation, the soon-to-be-wed couple of Marcus (Lil Rel Howery) and Emily (Yvonne Orji) fall onto some rough times. Hearing that their vacation plans may be ruined, Ron (Cena) and Kyla (Meredith Hagner) decide to take them in and share their vacation with them. Polar opposites when it comes to personalities, Ron and Kyla end up loosening the normally uptight Marcus, leading to a fun vacation for both couples.

On the last night of their vacation, Marcus has a vivid dream where he believes he has sex with Kyla. Freaked out about this, Marcus convinces Emily to do their best to avoid Ron and Kyla going forward, living by the mantra of “What happens in Mexico stays in Mexico.” Months later, as Marcus and Emily’s wedding approaches, Ron and Kyla re-enter their lives, creating hilarious hijinks along the way. 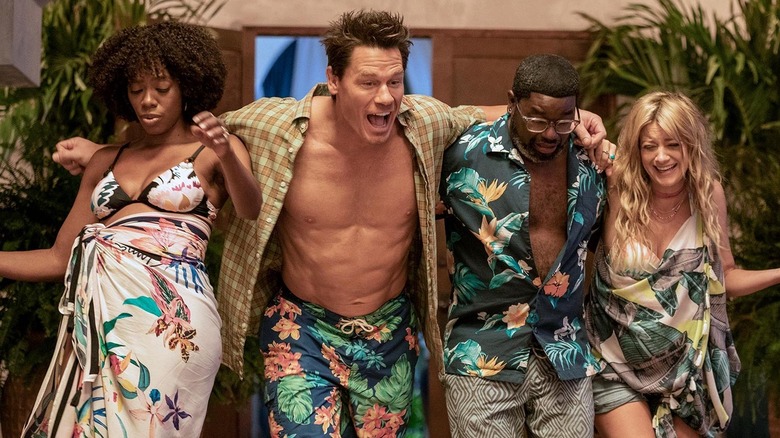 Throughout Vacation Friends, I kept waiting for something sinister to happen. While I knew this was a buddy comedy, I still felt uneasy about how Ron acted toward Marcus. I kept thinking, “Oh, here comes the plot twist” and, “He’s going to totally blackmail Marcus… just watch.”

I realize that horror films have made me cynical. I trust nothing and no one, especially in movies. But Vacation Friends left me pleasantly surprised. I found myself laughing and enjoying the interaction between the cast. The dialogue felt natural, and the characters were not only likable, but lovable.

Vacation Friends is a fun buddy comedy that just screams for a sequel. I give it five out of five stars. If you like well-made comedies with good characters and actually funny jokes, Vacation Friends is a must-watch film. John Cena has definitely found his niche in Hollywood, and it works incredibly well for him.