Jumanji: The Next Level Gets Lost in the Jungle

In 2017, one of the best Robin Williams films, Jumanji, got a much-needed sequel. Yes, a true sequel, unlike the reboots that Hollywood has been pushing out the past few years. The events of the original movie were mentioned in the film, and Williams’ character, Alan, was directly referenced. Starring Dwayne Johnson, Kevin Hart, Jack Black and Karen Gillan, Jumanji: Welcome to the Jungle was a box-office success, pulling in more than $962 million at the box office on a budget of $150 million, making it the fifth highest-grossing film of 2017 and putting it on the list of the 50 highest-grossing films of all time.

With such a great showing and cast, it was only natural that Sony Pictures would want to continue stoking the flames. And thus, Jumanji: The Next Level was announced for a December 2019 release. Set to star the same cast, while adding legendary actors Danny DeVito and Danny Glover, this third installment to the Jumanji franchise sounded like it had the makings to surpass even the levels that Jumanji: Welcome to the Jungle had enjoyed.

Set a year after the events of the 2017 film, The Next Level finds Spencer, Bethany, Fridge and Martha living their separate lives, but still remaining long-distance friends. Unbeknownst to his friends, Spencer kept parts of the Jumanji game and hid it in his grandfather’s house. Feeling insecure with his “real world” self, Spencer hatches a plan to go back into the Jumanji world to become Dr. Smolder Bravestone once again.

After finding out what has happened, his friends decide to go in and help him. However, upon entering the game, they find that not only did most of their characters change, but they also brought along Spencer’s grandfather, Eddie and his friend, Milo. Not only that, but the game has evolved to its next level, bringing an all-new adventure and set of dangers. In order to survive this time, the team will have to not only save Spencer, but also the world of Jumanji. 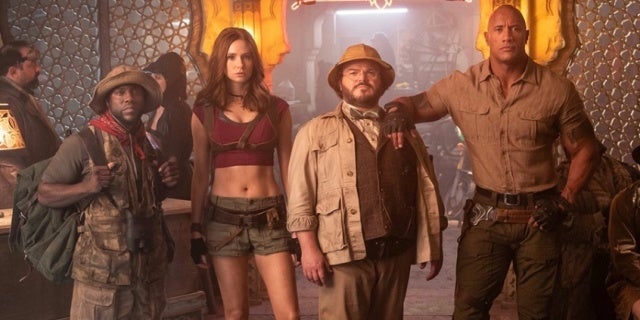 On paper, everything about Jumanji: The Next Level looks like the perfect third installment to the film series. The chemistry between the entire cast was great in the previous film, especially the banter between Dwayne and Kevin. Adding Hollywood greats like DeVito and Glover only sweetened the pot for this story. And when the previews hit, this film looked like the perfect mix of comedy and action.

Jumanji: The Next Level starts off flat and doesn’t find its footing through the entire film. The ongoing gag in the film is that the team did not get to select their avatars in the game, and (with the exception of Martha), they have to either learn how to play a different style or, as in the case for Eddie and Milo, they have to learn how to play the game completely. With Eddie and Milo being elderly, their avatars of Bravestone and Mouse also behave like two old men, while Fridge has to make due with being the out-of-shape Shelly, unable to use his “real world” athleticism in Jumanji. The joke runs on and on through the majority of the film, and quickly becomes repetitive and boring.

With the Jumanji avatars already fleshed out in the previous film, the only character development occurs with the real-life issues Milo and Eddie have. You would think that they would use time in the film to flesh out the new “bad guy” that has put the world of Jumanji in great peril, but alas, this character is never really explained other than being evil and a butcher. His motives for what he does are not really clear, and it is like he is just doing it to have something to do. So, without having any backstory or motive, the bad guy is almost like any other thug in the film: just there to be the final boss.

One of my favorite characters from the 2017 film was Ruby Roundhouse, played by Karen Gillan. She was a strong and sexy fighter (seriously, you can’t help but check out those abs) on par with the powerhouse Bravestone (Dwayne Johnson). She spent the majority of the film learning how to be the bad ass she truly was, and when she did, it was explosive and a great payoff. However, in The Next Level, she is relegated to explaining the rules to Eddie and Milo, throwing in the occasional cartwheels and flips. Her fight scene was overly choreographed and just did not feel natural, like it did in Welcome to the Jungle.

The mid-credits scene shows a prelude for a third (or fourth if you count the original) installment in the current series. But with its release coming just one week before the much-anticipated Star Wars: The Rise of Skywalker, as well as the film adaptation of Cats, Jumanji: The Next Level only really has one weekend to prove that a third film is needed. With its weak offerings, though, this may be the last of the series.