Eddie Murphy is Dynamite as Dolemite! 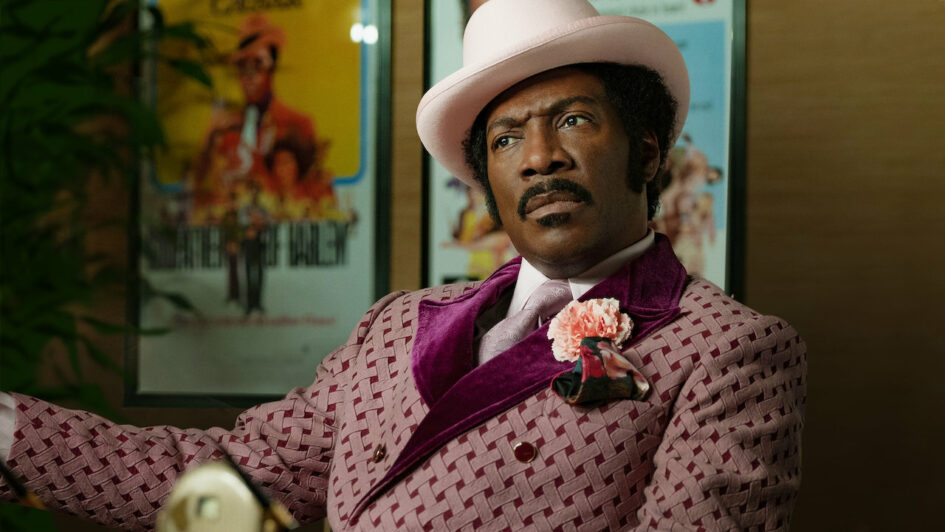 Eddie Murphy shines as Rudy Ray Moore in Dolemite Is My Name.

Per Matt
It has been a long time since I thought, “Eddie Murphy is dynamite in this big-screen role.” Correction. It’s been a VERY long time since I have last imagined that phrase. But here it is, in 2019, and Murphy is no longer pandering in family films and he’s finally found a character — this time, one based on real life — that fits naturally with the comedic actor, and it’s true… Murphy is dynamite in Dolemite Is My Name!

Throughout the film, Eddie Murphy and Director Craig Brewer are winking at the audience, as they know this film isn’t high art, but it is entertainment, something which fans of blaxploitation films have known for a very long time. Name breaks the fourth wall while telling Rudy Ray Moore’s personal story of trying to get famous. He strikes out as a musician, as a comedian and somewhat of a dancer, and by the time he finally takes his fate into his own hands, he’s a middle-aged, overweight, kinda washed-up performer, which in part seems to mirror Murphy’s current-day celebrity.

In total transparency, I was a big fan of Murphy’s Saturday Night Live phase and I really enjoyed his early career in feature films… but then he sort of faded away until making a big-time comeback as The Nutty Professor. Sure, he was great as a sidekick in the animated Shrek films and to an extent, as a voice actor in The PJs, but the closest he’s gotten to being classic Eddie might have been in Dreamgirls, which was the last time he won multiple awards for his acting.

Growing up, without having basic cable, my cinematic knowledge multiplied tenfold with the release of VHS cassettes. I enjoyed watching many cult classics, including the Dolemite films — the cheesier, the better. Featuring sexy women, kung-fu and a bad mother who knew his way with language (and the ladies), Rudy Ray’s exploitation films were always a blast to watch. That source material also bleeds into Dolemite Is My Name, which is also a hoot to watch. From the reactions of other critics and the subsequent award nominations, could Murphy be in line for another possible Oscar nom?

Surrounded by great actors like Keegan-Michael Key, Mike Epps, Tituss Burgess and Da’Vine Joy Randolph, Murphy doesn’t have to work too hard to get into his role. My favorite actors of the film are Wesley Snipes (finally making a comeback in this extended cameo) and Craig Robinson, who happened to write and play some of the catchiest tunes in the movie, outdueling many popular past hit songs.

At the very least, Dolemite Is My Name should receive a Screen Actors Guild Award nomination for Outstanding Performance by a Cast in a Motion Picture. Since the guild is made up of actors and the film is about actors trying to make a micro-budget movie, there’s a very good chance it will be in the running on awards night. And film’s prospects are looking pretty good at the Golden Globes, as well. Anchored by Murphy, it seems the actor-comedian has yet again remade his career, climbing back to the top tier of Hollywood celebrity. Hopefully, he won’t abandon the type of films that led him there and he’ll work on more projects comparable to Dolemite in the near future…