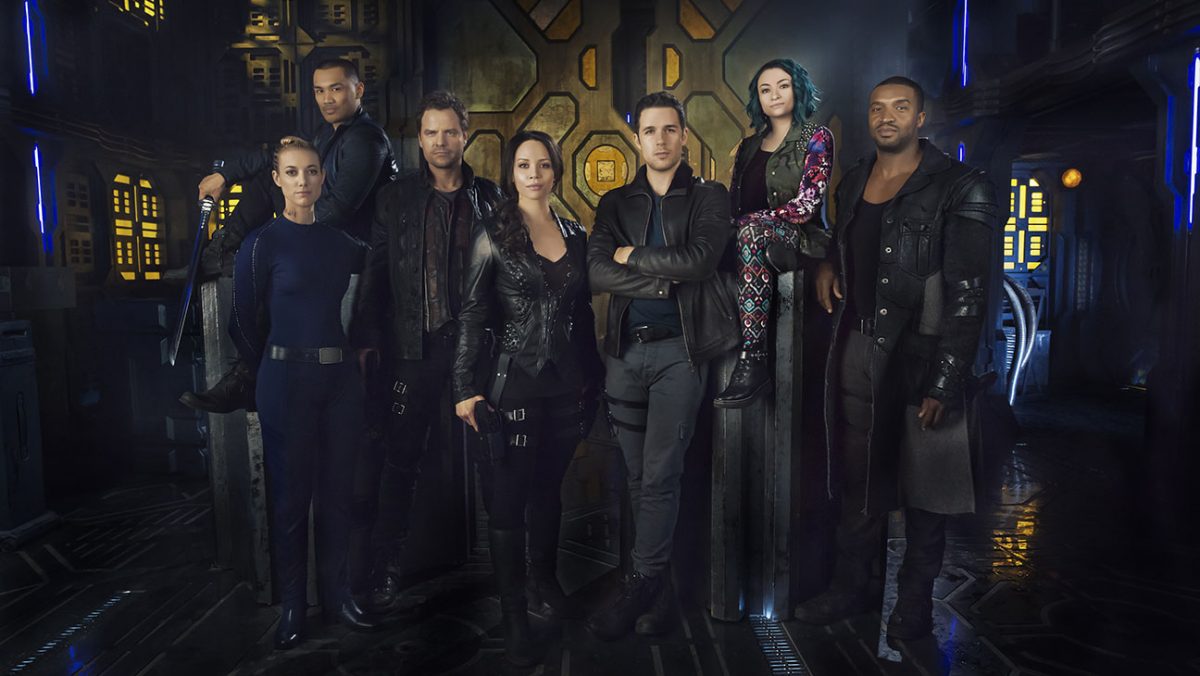 Welcome to my first entry on Zombies In My Blog. This first time out will likely be shite, so give me some brutal and honest feedback and watch me get better with time. I am a huge fan of Canadian and British science-fiction television and film, and am eager to share my enthusiasm about two of my recent / current favorites (Game of Thrones and Downton Abbey notwithstanding).

Where do I begin? I think I’ll go back to before the beginning, back to the 1980s and 1990s when there was a big selection of cool TV shows, some of which were network properties, but many of which were produced independently for syndication in the US or elsewhere. We got memorable titles like Gene Roddenberry’s Andromeda and Gene Roddenberry’s Earth: Final Conflict, Mutant X, NightMan, Farscape, Lexx, Jeremiah and such. Of course, there was Star Trek: The Next Generation and Star Trek: Deep Space Nine (my favorite Trek series, but that’s another discussion). For me, it was a Golden Age of Syndicated sci-fi TV, augmented by the advent of the Sci-Fi Channel.

The Sci-Fi channel signed on in 1992, rebranded as SCI FI in 1999 and the new name SyFy took effect on July 7, 2009. It became the home for such shows as Sliders when FOX canceled it, Stargate SG-1 when Showtime canceled it, along with Canadian shows, other foreign shows and eventually new and original shows such as David Eick and Ronald D. Moore’s extraordinarily reimagined Battlestar Galactica and its dizzying prequel, Caprica.

Many times SyFy will partner with other networks internationally to bring shows to broadcast. Two such examples are co-productions with the Canadian specialty network Space, which is basically Bell Media’s version of the SyFy channel for Canucks. My affection for and the impact of “Canadian Influences on American Science Fiction Television and Film” led me to create a presentation on that very topic for recent sci-fi conventions Hypericon and GMX.

Friday, July 1 marks the return of two shows that premiered last summer on SyFy and Space whose freshman seasons I really loved, both of which return for sophomore seasons. The pedigrees of each are solid. Dark Matter is done by the folks who did Lost Girl and the Stargate SG-1, Atantis, and yes, Universe series, while Killjoys is a kid of the creator of BBC America’s incredible Orphan Black (which airs in Canada on, you guessed it, Space).

Casting, writing, direction, acting and special effects on both is awesome! As mentioned earlier, the Stargate team is the moving force behind Dark Matter, and Amanda Tapping directed an episode of one, as did Peter DeLuise and Martin Wood. Wil Wheaton makes an appearance on Dark Matter, as do Amanda’s Atlantis co-stars David Hewlett and Torri Higginson, along with Hiro Kanagawa, Rob Stewart, Ennis Esmer, Andrew Jackson and Conrad Pla, all familiar faces if you watch TV made in Canada, even non-genre fare. Ironically, Amanda Tapping also guest starred on Killjoys, so you see the two do share a lot.

But don’t just take my word for how great these shows are. Maureen Ryan, Chief TV Critic for Variety, says, “Settling in to watch this show never fails to put me in a happy place. Some TV shows effortlessly tick a large number of the boxes you want them to tick and throw in a few more goodies just for fun, and Killjoys is that show for me… It’s a light, well-made, zippy TV show that knows what it is and delivers solid action, adventure and character development despite its limited budget. The cast has terrific chemistry, and the second season of the show ably builds on the strengths of the quite enjoyable first.” She also says, “For hardcore sci-fi fans, Dark Matter should have enough upsides to keep them tuning in: It has a sense of humor, reliable forward momentum, and it generally gets the job done reasonably well.”

Here are excerpts and modified text from the official press releases of Bell Media and the SyFy networks:

All aboard the Lucy! 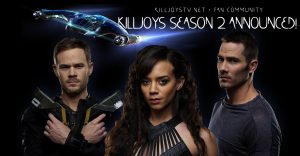 Lucy is the spaceship three killjoys (space bounty hunters) fly aboard and her AI has spunk. Space’s most-watched original series KILLJOYS is back with more interplanetary bad-assery than ever before as it returns with 10 one-hour episodes when Season 2 premieres Friday, July 1 at 9 p.m. ET / 8 p.m. CT, Created by showrunner Michelle Lovretta (creator and showrunner of Orphan Black) and produced by Temple Street, a division of Boat Rocker Studios, for Space and Syfy, Killjoys follows interplanetary bounty hunters Dutch (Hannah John-Kamen), Johnny (Aaron Ashmore), and D’avin (Luke MacFarlane), as they hit the ground running to uncover Dutch’s duplicitous and mysterious childhood mentor, Khlyen’s (Rob Stewart, who also played Nassan in the Pilot of Dark Matter) secret agenda. 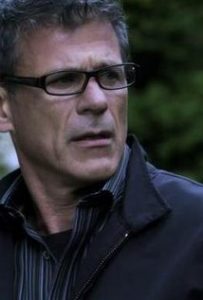 In the Season 2 premiere of Killjoys, Dutch And The Real Girl (Friday, July 1 at 9 p.m. ET), after failing to rescue D’avin from Arkyn, Dutch and Johnny head to Eulogy, an outlaw-only barter town, in the hopes of stealing a mysterious, high-tech shield from the infamous Connaver gang. WTF does that mean? OK, Johnny and D’avin are brothers who work with Dutch, a super bad-ass chick. You may or may not have noticed Hannah John-Kamen in Star Wars: The Force Awakens, which she shot before landing the role of Dutch, but I did! She also played Ornela, one of the Dothraki widows in the Season 6 Game of Thrones episodes Oathbreaker and Book of the Stranger.

Dark Matter navigates through a fragmented crew aboard a derelict spaceship, the Raza, with no memory of how they got there. Facing threats at every turn, they work together to survive a voyage fueled by vengeance, betrayal and hidden secrets. Season 2 finds the crew of the Raza embroiled in an intergalactic conspiracy, seeking a mysterious device that may hold the key to victory in a looming all-out corporate war. 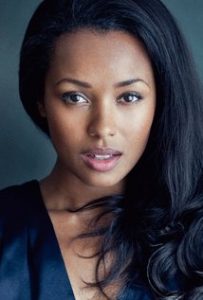 / Red Priestess in this season’s episode No One / PICTURED AT RIGHT) as Nyx, an ex-con with killer instincts and Shaun Sipos (Melrose Place / David Breck), a world-class surgeon with a dark past. Also boarding the Raza is star of iconic cult classic Run Lola Run, Franka Potente, who guest-stars as Commander Shaddick, a cool, calculated force of nature who’s hell-bent on making things difficult for the Raza crew.

In the Season 2 premiere episode Welcome To Your New Home (Friday, July 1 at 10 p.m. ET), the crew of the Raza have been betrayed by one of their own, with a motivation that questions everyone’s loyalties. The rest of the crew find themselves incarcerated in the notorious Hyperion-8 Detention Facility where they must deal with dangerous fellow inmates a corruptWarden, and corporate agenda that threatens their lives.

From Syfy’s press release: The series, produced by Prodigy Pictures, follows six people who wake up on a derelict spaceship with no memories of who they are or how they got on board, averaged 1.8 million viewers in its first season on Syfy. “With its mysterious premise and fascinating characters, Dark Matter has built an incredibly loyal, passionate and engaged fan base,” said Chris Regina, Senior Vice President, Program Strategy, Syfy. “We look forward to another out-of-the-world season from this talented creative team.”

OK. So, if you got through all that, the bottom line is that Killjoys is an incredible joy ride with space bounty hunters led by a kickass mystery woman of color (Hannah is the British-born daughter of a Nigerian forensic psychologist and a Norwegian fashion model). Dark Matter is a riddle wrapped in an enigma inside a mystery about a crew of six people and an android, who all wake up with amnesia aboard a freighter ship in space, trying to figure out who they were / who they are and what to do as more layers of each are gradually revealed, led by the stunning and multi-talented Melissa O’Neil (the youngest female and first female to win Canadian Idol).

This is the best version of SyFy Fridays in light-years!