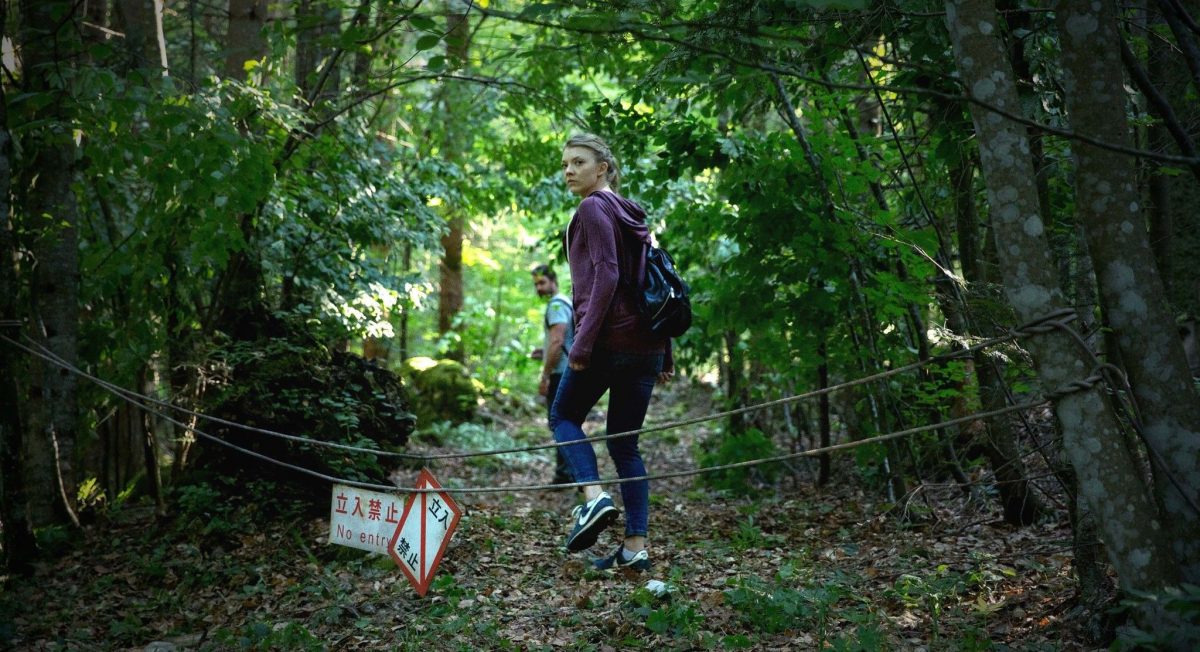 The Aokigahara forest on the rim of Mount Fuji in Japan has a pretty morbid history. It ranks top three in the world for suicide locations. Because of this, and the lore suggesting that angry spirits known as yurei inhabit the dense woods, the Aokigahara forest is a ripe setting for director Jason Zada’s The Forest. There are as many as 108 suicides in the woods annually. It is this statistic which urges Sarah (Natalie Dormer) to travel to Japan to find her suicidal twin sister who disappeared there unexpectedly.

The Forest encompasses many things that make most fearful. Far off lands, xenophobia and culture shock, isolation, losing a loved one, and paranormal phenomena all play on innate fears here. While there is a lot to work with for a good scare, the terror is somewhat disorderly. Apart from a string of well placed creepy moments and legitimate scares, there are the cheap jump scares that can be seen coming from a mile away. The reason they are easy to spot is because characters and plotlines fall into familiar tropes that have been used thousands of times. Walking down a dark hallway in the middle of the night equals creepy woman emerging from the shadows. Finding a little Japanese girl in a cavern in the middle of the woods also doesn’t surprise us much when her face turns into a demon-like manifestation. What’s disappointing the most about this is that valid scariness is generally diluted because the predictable frights take away from their effect.

The fact that some of the plot points either have holes or are aren’t explained well also adds to the disarray. Early into the film, Sarah meets Aiden (Taylor Kinney), a journalist working for an Australian magazine while located in Japan. Though it is peculiar his accent is noticeably American, the chance meeting between the two isn’t unusual. Rather, the circumstances that lead Sarah to Japan to find her sister begs question after question without sufficient reasoning behind them. Sarah tells Aiden all he needs to know about Jess. She tells him she got a call from Japanese law enforcement informing her that her sister is feared dead because she entered into the Aokigahara forest, yet there is no explanation as to why they would know this. She also tells him the story as to how their parents died, which turns out to be an almost impossible scenario which then turns out to be untrue. There is no real reason for Sarah to lie about her sister, but she eventually sets the story straight which explains how Jess became unstable and suicidal.

There are a number of these little instances that just don’t seem to add up throughout. In all, the subtleties and coincidences feel a little too random to fully make sense. While some of the events that take place are eureka moments that the writers surprise and shock with, the majority are familiar ploys that don’t deliver real fright. Some of these moments don’t add to the plot either.

While horror is a genre that often falls into cliché, The Forest just has too much of it to appreciate. Just about everything in the story is off-putting for seasoned horror fans. Just the pacing alone messes with the rhythm of the plot. The first half of the movie is slow and building up to a second half that is rushed without any steady tension. Even a no brainer choice like creating a dreadful atmosphere escapes the movie, which takes place mostly in broad daylight, specifically within a dense mountain forest. On top of that, the soundtrack, a necessity for most movies to establish an emotional undertone, doesn’t deliver a chilling mood that one would expect.

Good horror is hard to find in a sea of mediocre releases, which make the truly scary ones memorable. The Forest is a half decent idea that almost pays off but too much to be desired. When fear becomes a contrived imitation of itself, it loses its luster. The Aokigahara forest will unfortunately be remembered only for the sadness and despair that brings people to give up their lives there and not the attempt to make the ghostly history behind it into a viable horror movie.