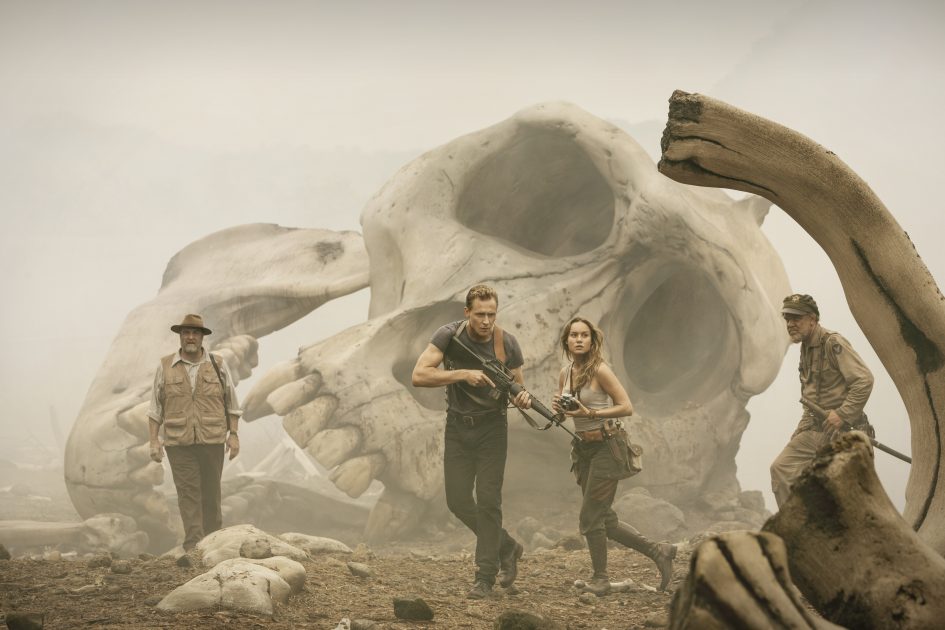 If there’s one trope I love above all others in horror movies, it has to be the giant monster. From super-imposed shots of killer bugs and rabbits terrorizing cities to the Japanese cinema tradition of foam rubber Kaiju terrorizing Tokyo and the stop-motion magic of Ray Harryhausen’s monsters, if it’s a big critter tearing up the town, I’m all for it.

Kong: Skull Island was a must see for me this past week. I’ve always loved the king since I was a kid and felt that he more than any other “monster” was tragically misunderstood. The enormous 85-year-old ape has undergone some drastic changes in size and persona through the decades. From his inception as a 30-foot-tall gorilla running off with Fay Wray to the top of the Chrysler Building, to the unfortunate 2005 remake featuring Jack Black, the story, itself, is fairly common. The Eighth Wonder of the World is seen battling other primeval monsters before being stolen away and put on display for the amusement of man.

That was before Kong: Skull Island. 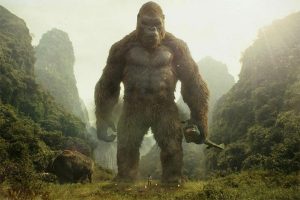 KSI takes place in the final days of the Vietnam War, as American troops are pulling out of southeast Asia. Colonel Packard (Samuel L. Jackson) commands one of the final Huey squadrons being pulled from the region, a man desperate for glory and honor in the form of a final mission. Redeployed as an escort for a scientific mission to Skull Island, he finds his chance in an unlikely ally: Bill Randa (John Goodman), the founder of Monarch. Randa was aboard a ship, presumably during the Korean conflict that was destroyed by an unidentified Kaiju and is holding a grudge. Monarch and Randa are out to prove the Hollow Earth theory and the best way to do this is to drive up as many monsters from the depths of Skull Island as they can. With James Conrad (Tom Hiddleston), a professional big-game tracker and Mason Weaver (Brie Larson), a renowned anti-war photographer in tow, the expedition sets off to find out what secrets are hiding on the mysterious isle.

For a big-budget monster movie, a prequel/tie-in of sorts to 2014’s Godzilla, this movie had everything. The characterizations and delivery were spot on every time while the creatures — including a bamboo-legged giant spider — were absolutely horrifying at times. Scenes, including many with Jackson’s Colonel Packard, were reminiscent of ‘Nam era classics like Apocalypse Now with the sort of mad-eyed drive for destruction that swallows the colonel and, unfortunately for them, the men in his command. Meanwhile, John C. Reilly’s Hank, a stranded WWII era pilot who crashed into the island during the conflict in the Pacific, brings both a comedic release from tension, as well as a voice of sanity and reason that goes largely ignored by the entire cast. Imagine that archaic stereotype of a moviegoer shouting, “Don’t go in there!” Well, that’s Hank through the entire movie, suggesting that instead of going off half cocked into every situation, that they listen to his sage advice and decades of experience on Skull Island to help get them all to safety. The film ends with an epic battle between King Kong and another giant monster, in a battle that feels a bit lackluster, but nonetheless epic.

The movie gives us everything fans of the genre and the King have been looking for since the last unenthusiastic outing in 2005. The soundtrack is quintessential ’60s to ’70s rock blended with an original score, while the movie, itself, is filled in tributes to other great island monster and horror films. Not only that but, Easter eggs and end-credits scenes help link the movie into a larger universe of films leading into 2019’s Godzilla: King of the Monsters and 2020’s Godzilla vs. Kong. The next few years are going to be huge for giant monster fans. Just wait and see. 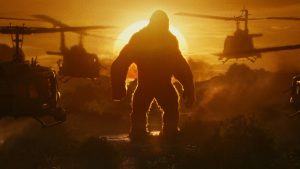 It’s a bright new day for Kaiju everywhere. Not so much for mankind.