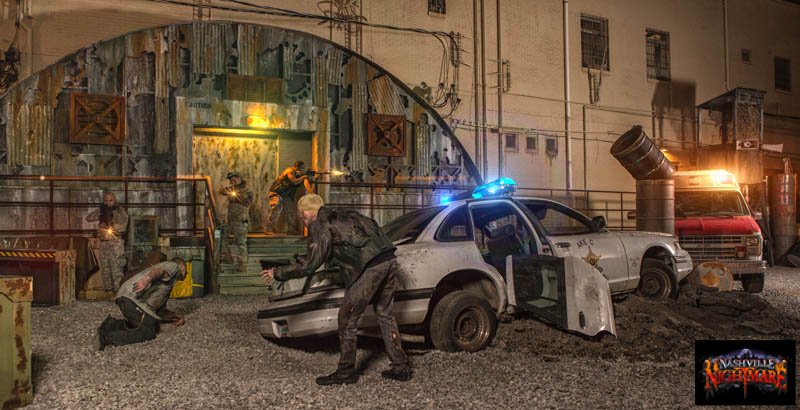 Fewer things get my blood pumping better than haunted houses. The smells. The sights. The sounds. The anticipation. All of these things lead to much fun to be had, once I enter those darkened hallways. Probably the only thing that I like as close to haunted houses is playing laser tag. It’s almost the same experience, without the dread of going into the unknown. You just have to worry about teens and kids, not the blood-thirsty undead or crazed soldiers.

Unless you combine the two….

For the second year in a row, Nashville Nightmare Haunted House has played host to Zombie Apocalypse Live, happening this year on April 21 to 23. This event travels the world, bringing together the thrills of laser tag and the chills of haunted attractions. Last year, Nashville Nightmare proved to be one of the top venues for Massive Noise, the company behind Zombie Apocalypse Live, so it’s only natural that they give the No. 1 ranked haunted house in the country another event.

In 2016, it was a hot summer day with lots and lots of sun. This year, Mother Nature decided to play a different game. Instead of sun, the lords above decided to release torrential downpours of rain, coupled with some very chilly temperatures. Some haunted houses would have folded up shop and decided to postpone the event to another weekend. But when asked if the event was going to be affected by the rain, owner Brad Webb simply replied, “Not today.” While the original queue line area was filling up with water, Brad and the team were busy moving the line to a new area, routing completely around the flooded areas.

Once guests were inside the new and improved queue / briefing area, they were broken up into teams. Each team consisted of a maximum of four players. Team members were issued military-grade training rifles, loaded with CO2 canisters. The rules were very simple… SURVIVE! Then it was time to enter hell, itself.

I decided to try my hand at this. Last year, I was unable to venture in, but luckily for me this year, I was able to try it out even though it was a “dry” run (no CO2 and actors were in street clothes).

Upon entering the first maze, located inside the Industrial Undead attraction, I was greeted with a blast of fog so dense I actually bumped into Matt Scott (lead makeup designer and artist for Nashville Nightmare), who had the unfortunate role of being in front of me. Regrouping quickly, I was able to get my bearings and proceed behind my team. Carroll Moore, former owner of Death Yard Haunted Attraction and current manager for Priest Lake Haunted Woods (opening in September), was our leader, and he began slowly, leading us into the dark abyss. At first, all we ran into were some static props, but that all changed when a military officer came charging down the hallway, screaming for help as a ravenous walker charged him from behind, ripping his neck open. While we were able to put the walker down, the damage had been done and the poor soldier had to be finished off with a merciful head shot from my gun. Somber moment, but we had to keep moving.

Around the next corner, we ran into several more Zombies. Taking them down quickly, we made our way through the narrow corridors of a desolated military base. Zombie soldier after Zombie soldier appeared from seemingly nowhere. They came from inside the walls. The came from darkened corners. One even came from out of the floor (I think he was hiding under a table, but for drama’s sake, I will go with he busted through the floor). But our trio made it to the safety station without loss of life. As the sergeant in charge of the checkpoint inspected our guns and reloaded the “ammo,” he gave us the choice of investigating the infirmary or taking the pansy path, which led to the exit.

“We ain’t no pansies! We got a mission to do and by God we are going to do it!”

Gathering our newly stocked weapons, we entered into the hospital section, located inside the Horror High attraction. The smells of death and decay immediately began their attack on our nostrils, and soon Matt and Carroll were stuck in the middle of a Zombie horde. Luckily for them, I was able to see it coming and finished off the biters before either of them could become lunch. As we moved into the morgue, body after body began rising off their tables. Some were merely animatronics, but one was not. He got behind me and I almost became a member of the walking dead, if not for the quick reflexes of my team leader. We hurriedly made it out of the morgue and found ourselves entering the mess hall. Evidently, the Zombie attack began right near chow, as the room was littered with corpses. While they may have been dead, they were far from immobile. Several bony hands reached up and grabbed at our legs, hoping to feast on our flesh, but alas, our automatic weapons turned the tide. With little ammo left and the exit in sight, we made a run for it. It was as if the Zombie collective had set up one last stand, as the room began filling with ghouls, but our ammunition held out for one last burst. As we entered the safety zone, a collective sigh of relief was shared between Carroll, Matt and myself. We had survived the Zombie Apocalypse! 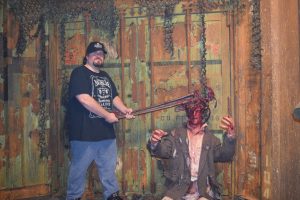 Eat your heart out, Negan!

After the dry run, Brad gathered us together to go over any tweaks needed to be made. The fixes we suggested, while minor, were in fact critical to the storyline, and made complete sense to Brad. He enacted them, and on the next run, everything worked like clockwork.

Based on the reactions of all the customers who came out, it was a truly awesome experience. The only compliant I heard all night was from people who bought the cheapest ticket, which does not allow you access to the second half of the mission. Each one immediately asked if they could buy upgraded tickets to go through the second half. And we gladly assisted in those requests.

So, while the April Zombie Apocalypse Live event is over, you do not need to worry. On July 7th to 9th, Nashville Nightmare will once again host Zombie Apocalypse Live. While the venue has not been completely decided yet (there are talks of moving it to the Night Terrors building), the experience will be different, as construction for the 2017 haunt season is ongoing and should be close to complete by that time. That means that even if you experienced it this past weekend, you will have a whole new adventure come July! Tickets will go on sale at the end of June.

If I had to give this a rating, I can safely say it is a five out of five event (full disclosure, I work for Nashville Nightmare). The atmosphere, from smell, lighting and sets, was perfect. Actors played their roles extremely well, and even set up some interesting encounters. Got my heart pumping, which was exactly what I wanted!