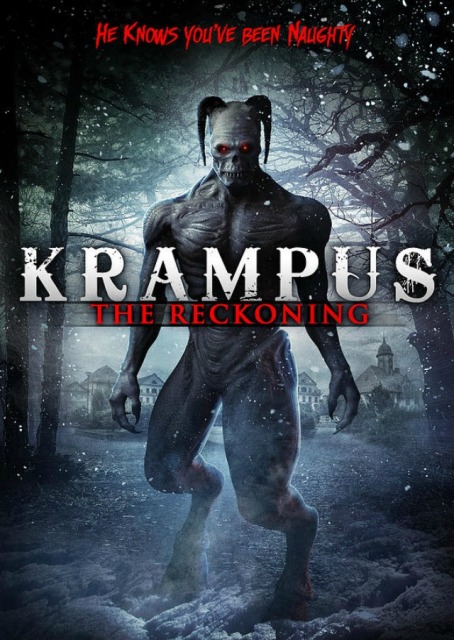 Per Matt
Perfectly setting the tone, a 4 A.M. thunderstorm on Christmas morning felt like a fitting time to review Krampus: The Reckoning. Lightning strikes and cracks of thunder filled the room as I began watching the movie, which is based on actual European folklore.

Considered as old as time itself but only considered an urban legend by many today, Krampus embodies the exact opposite of St. Nicholas. While presents were given to good little boys and girls on Christmas morning, Krampus is considered the Christmas devil, which punishes all misbehaving children.

Even though it’s based on that ominous mythology — which is incredibly intriguing, by the way — once in a while, a movie will have so many things going against it, there’s no chance it can be considered anything other than a learning experience for all of the filmmakers involved. Krampus: The Reckoning is an indie holiday film that is definitely a true horror for anyone patient enough to watch it through to its bitter end.

Zoe Weaver is on the naughty list. Labeled the “blonde-haired devil child,” Zoe is a little girl who doesn’t age. She’s somehow involved with voodoo, always choosing Krampus’ next victims (in this film, they’re always people who mistreat children). It’s a predictable storyline that’s more eerie than scary and somewhat reminiscent of The Omen. Oddly enough, Krampus rarely appears in a movie that shines the spotlight on the mysterious creature. But when the monster does make its handful of brief appearances, the film’s cheap special effects are exposed. Up to this point, the overall movie can be rated average, at best, but beyond the slow-moving storyline, there’s a TON of technical problems that totally ruined the movie-watching experience for me.

I tend to watch rental movies with subtitles, because their audio quality can be difficult to translate, at times. For some reason, the first half of this movie has mixed-up subtitles on display, which I later discovered originate from dialogue in the last half of the movie. Displaying two different sets of conversations simultaneously was definitely distracting, made worse by the fact that I couldn’t seem to turn off the option. The worst part: Many of the words were misspelled and sometimes entire sentences were missing, labeled as “(mumbling).” This is absolutely unacceptable and whichever company provided these not-up-to-par subtitles needs to be permanently shut down. But really, it’s indicative of the film, as a whole. The filmmakers didn’t really seem to care about creating a quality movie and the audience can tell. You don’t have to be audio challenged to understand the need to sic Krampus on these filmmakers, for putting us through the terror of watching this movie.

Strength: The movie is based on actual European folklore.
Weakness: Too many failures to list.
WTF Moment: In this world, Santa Claus isn’t real, but Krampus is and the demon actually rapes a woman onscreen, which is quite alarming.

Notable Quotes:
– “That child had the devil in her.”
– “He always comes for the bad ones.”
– “Even for a kid who’s been through a lot, there’s something weird about her.”
– “Old and forgotten things have a way of ever-so slowly creeping back into our world.”