LA to Vegas is Cleared for Comedy 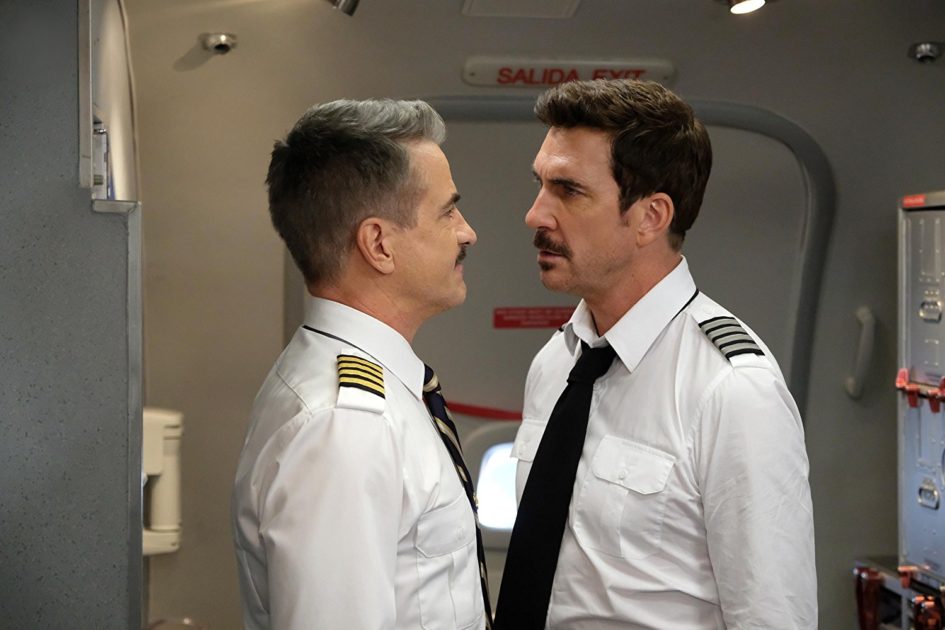 It's Dermot (Mulroney as Captain Steve) vs. (Dylan) McDermott (as Captain Dave) in LA to Vegas.

Las Vegas is known for its excess and for attracting oddly extravagant characters, but the real-life Sin City has got nothing on the new Fox TV show. This is the story about the people who fly from LA to Vegas every weekend.

This series’ main focus seems to focus on the flight attendants and the pilots of Jackpot Airlines, as well as the interactions with their passengers. There’s an impulsive flight attendant, a pilot who wants to connect with his passengers in all the wrong ways and many more conflicts taking place in this workplace comedy that takes place 20,000 feet up in the air. They’re the underdogs, but it’s easy to root for them all.

After seeing the commercials previewing this program, more of the cheesier lines of dialogue were highlighted from the pilot, but the funnier parts were not. Those were some odd choices from the network’s marketing department. The audience is introduced to Captain Dave (played with deadpan humor and inappropriately funny by Dylan McDermott). He’s so cheesy, he doesn’t even know it.

“If I can’t have some fun with my passengers, why am I here?”

“It’s time to get high. And also fly this old bird.”

“This plane is full of monsters.”

Episode 1 is ridiculous… but it’s also ridiculously funny. Subsequent episodes improved greatly and as if hitting a lucky streak, the series feels like it’s hitting its groove with the much-publicized episode, “Two and a Half Pilots.” Wondrously co-starring Dermot Mulroney as Captain Steve, these egocentric pilots are paired as bickering rivals working with much better dialogue than that found in the pilot. Watching the Dermot vs. McDermott battles are gloriously hilarious. As a whole, the series leans more toward dry humor, but these great actors kick the one-liners up a notch face to face. Lady luck shines upon the show whenever they’re around each other. And luckily for the audience, McDermott will return for an upcoming episode airing on February 27th, appropriately titled “#PilotFight.” Can’t wait to see that one!

After watching four episodes, I’m more encouraged to see the direction of this series. While it seems a little far-fetched the airline crew would interact with its passengers outside of their flights as much as they do, the storylines have been getting better as the show progresses. Kim Matula’s flight attendant, Ronnie, seems to be getting more of the storyline’s focus and her character’s flaws feel real. The actress makes the role feel relatable, while being surrounded by some odd characters, including the pushover Co-Pilot Alan (Amir Talai), a sweet stripper (Olivia Macklin) and the foreigner, Artem (Peter Stormare).

With Will Ferrell as an executive producer, the question lingers when will the comedian actually show up on camera? And when will Executive Producer Adam McKay direct an episode? Hopefully, the answer to both questions will be soon, but until then, it feels like the forecast calls for Season 1 to be a smooth trip…