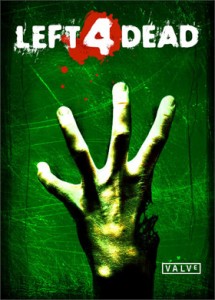 While it wasn’t the first video game to offer Zombies as target practice, it is one of the first games to do it right. Left 4 Dead combines the survival horror with the First Person Shooter perspective to actually be a very fun game. Even though there is very little storyline — and I mean VERY little — the overabundance of nonstop action covers up for it. I meant to review this game a long time ago for the XBOX 360, but I was having disc-reading problems. I finally got it started up, and renewed my love for #L4D action!

Shooting zombies with an arsenal of weapons never gets old, but playing the game on the expert difficulty is near impossible, unless playing with three human co-op partners. The gameplay is linear and objective-based. It doesn’t take much to get me preoccupied, during my never-ending battle with the undead. That would explain how easily I get lost, when playing Left 4 Dead. Whenever playing this game, and I tend to go out of my way to destroy all zombies! Then I usually get cornered and die. Simple Solution: Play this game with friends! They tend to keep you alive!

The AI is incredibly ignorant, and near impossible to work with, when gunning for achievements. Speaking of achievements, they are incredibly glitchy. Doing certain actions will sometimes pop an achievement. Sometimes it won’t. You’ll just have to be lucky… and plan on playing the game many, many times before getting them all. Zombie Genocidest is an incredibly horrible grind. Once I arrived at a certain point on a certain level, I used a rubber band to continuously kill the undead minions until I reached the magic number of killing 53,595 infected minions. My poor controller never recovered. Rest in peace, my partner!

The zombie hordes arrive soon after an audible whistle. I’ve had tons of nightmares featuring those infuriating tones, followed by tons and tons of zombies. Alone, they’re nothing. But together, they’re trouble. Not to mention the infected one, including The Boomer, The Hunter, The Smoker, The Tank and worst of all, The Witch. 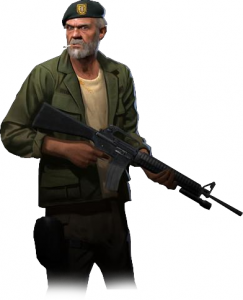 You get to play Left 4 Dead as one of four survivors: Francis, Louis, Bill and Zoey. They all seem to fit their stereotypical caricatures of movie characters. There’s the typical female victim (Zoey), the tattooed roughneck (Francis), the grizzled war veteran (Bill) and the IT Systems Analyst who’s also the token African American (Louis). Each character generally plays similarly. Weapons are not exclusive to each one and are interchangeable. The only difference between each character is the one-liners they speak. I always play as Bill. I have a soft spot for that cranky ole codger and love his interactions with the other characters.

Left 4 Dead features two secondary missions, offered as DLC: Crash Course and The Sacrifice. Both are fun. Both are easily obtainable, and are frequently on sale for up to 50% off during certain XBOX Live weekly specials. As a whole, I’d easily rate this game a 5/5 because the game plays just like a movie! A very fun movie. Unfortunately, the game includes a TON of incredibly glitchy achievements that Valve is just way too busy to patch. Therefore, I demote my rating.