The Walking Dead: When The Dead Come Knocking 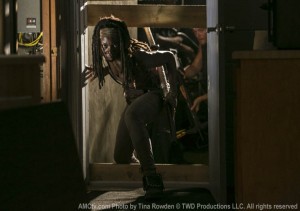 The balance of power is constantly swinging in opposing directions within The Walking Dead. At the beginning of Season One, Merle had none, having been handcuffed to the rooftop of a building. Now he’s back, holding Glenn and Maggie captive in Woodbury, trying to find his little brother, Daryl. Oh, how the pendulum swings. Michael Rooker oozes Bad-Guy vibes all day long. It’s a joy to see him return with a vengeance (although I was hoping he would become The Governor, but that’s an argument for another time). Rooker simply looks like he’s having the time of his life, as Merle.

Back to Rick’s Gang: Carol is back, after hiding in a cell. Michonne is still doing the silent-but-deadly thing, but does not like to be touched. Good to know. Something else entirely new: Glenn is a really tough dude. He’s withstood Merle’s torturing and had quite a bit of fight in him. This is a new perspective, one that Glenn hasn’t shown before. I like what I see, as the layers of Glenn are peeled back. Baby Ass Kicker is now officially named: Judith. Doesn’t have the same flare during the Zombie Apocalypse, but it’s passable.

The Governor, and his lackey, Milton, are performing all sorts of odd little tests, and The Governor, himself, shows why he is in charge. He’s even more ruthless than ever, forcing Maggie to remove her clothes. For some reason, he stopped short, just before raping her. He showed that he will stop at nothing, in order to get what he wants, even contemplating rape. This, too, is a new side to the primary antagonist.

And another first for the series, the semmingly new music. The show’s composer has added a new techno vibe at Woodbury. It’s a creepy signal that evil is nearby. Obviously, Robert Kirkman thinks Nine Inch Nails is the Devil’s music, otherwise, he wouldn’t have approved the Woodbury theme. Ha!

The next episode will be the Season Three Mid-Season Finale. While there was quite a bit of action in this, here episode, there shall be even more zombie bloodshed to come, before the long hiatus.