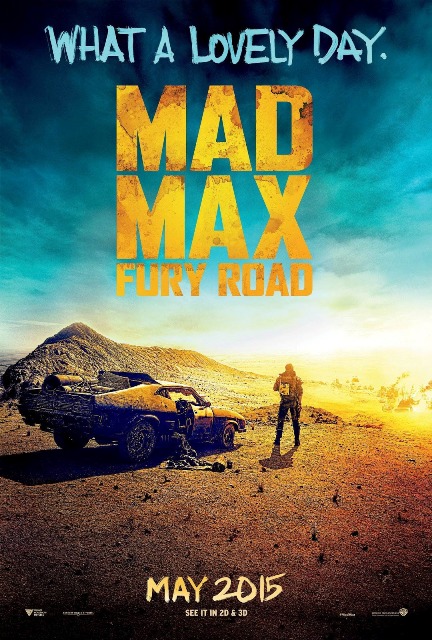 That line of dialogue from Mad Max: Fury Road might as well summarize Writer-Director George Miller’s frame of mind. While it’s been 36 years since he originally released Mad Max (and 30 years since the last installment of the franchise), he’s been itching to return to the futuristic wasteland for some time now.

After 18 long years of development, he’s finally made his movie. With Mel Gibson no longer attached to the project, Tom Hardy steps in as Max Rockatansky. It’s better late than never to return to a world where water, fuel and food are scarce. Feels like we never left.

As Fury Road opens, Max is still haunted by the death of his family and is quickly captured by the brutal War Boys. When they discover he’s a universal blood donor, he’s kept as a hostage (his nickname is “Blood Bag”) and spends up to half of the movie as a hood ornament. Meanwhile, Imperator Furiosa (played by Charlize Theron) is sent on guzzaline run, but she’s got other plans in mind. Hidden within her War Rig are five of Immortan Joe’s wives, who have been held captive by the warlord.

Joe rules with an iron fist and has developed a cult of personality, so all hands are on deck to retrieve his precious harem. Along the way, Max is freed and eventually teams up with Furiosa and the Five Wives. Some are seeking hope; while others look for redemption. Together, they all hope to survive this barren world.

Expect lots of speed, action, destruction, fighting and anarchy with a side of extreme stunts throughout the entire movie. Mad Max: Fury Road features an original and creative language created for this universe that was not present in previous films. It is new, but feels familiar. There’s some great road music featured that has to be experienced to be believed (as well as enjoyed). Some say there are chronological issues with this installment of the Mad Max franchise, but I didn’t really notice them. Hardy basically takes a break for half the movie, even though he is portraying the main character of the movie, which was odd. What is not odd is the CGI that is used for Furiosa’s robotic arm, which was really impressive.

The action is fast and furious(a) with bits of storyline tying it all together. There’s so much action, I frequently got lost in the shuffle of the rapidly moving camera angles. I’d expect nothing less from a blockbuster tentpole movie.

After Mad Max: Fury Road grossed more than $374 million worldwide, it’s no surprise that Mad Max: The Wasteland has already been announced as the next chapter for the franchise. With Hardy already signed up for four more sequels, it looks like he might actually get the chance to take the character away from Gibson and claim it as his own.

Strength: Incredible nonstop action.
Weakness: Storyline is paper thin, but good enough.
WTF Moment: Furiosa received so much battle-action damage, it was like her character was an action figure.