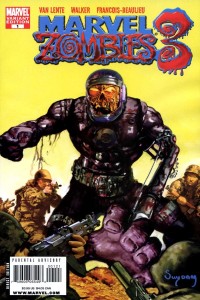 Will the zombie plague ever leave the Marvel superheros alone? No chance, since Marvel Zombies is big business for the comicbook publisher.

Without warning, a perpindicular universe overlaps our own, and out pops Zombie Deadpool to spread the disease on Earth-616. Apparently, the virus prefers to infect superhumans as a more efficient means of spreading itself. Machine Man and Jocasta are teleported to the Zombieverse where the virus originated, in order to get a sample of human blood native to the dimension, in hopes of creating a vaccine.

I’m still learning about the many secondary characters of the Marvel Universe, and this was a decent introduction to Machine Man and Jocasta. I don’t know much about their backstory, but they worked well within this storyline. Picking non-humans to fight the undead was a brilliant choice, although at first, I was hesitant. My only minor complaint was discerning between the different multiverse Earth planets.

Lots of action, lots of Macnine Man (and very little of anybody else) and some great one-liners, too!

Notable Quotes:
– “Looks like a job for… the Merc with half a mouth!”
– “What’s a Deadpool?”
– “You are a very sick robot, you know that?”
– “I’ll admit, the chainsaw is a tad cliche… but I’ve always had a soft spot for the classics.”
– “We exist only to spread the Hunger Gospel.”
– “Being dead hasn’t stopped you idiots from ‘monologuing.'”
– “I have been programmed to eviscerate your repulsive squishy organic bits and chew gum. And I hate gum.”
– “I am a vampire! I am a zombie! I am a Vambie!”