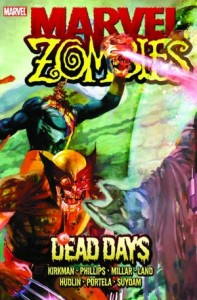 After Robert Kirkman (The Walking Dead) left his undead imprint on the Marvel Universe, creating the highly successful trade paperback Marvel Zombies, a sequel was a certainty. Too much money to ignore.

In a continuing storyline, Marvel Zombies: Dead Days shifts focus. It collects four separate stories. Instead of being a true sequel, the inter-dimensional timeline moves backward (the prelude of events on Earth-2149 leading up to Marvel Zombies 1 and the origins of the plague in its first occurrence, from the pages of Ultimate Fantastic Four on Earth-1610) and forward (the true storyline sequel, following events of Marvel Zombies on Earth 2149).

More details of the zombie origins are slow to unfold, but that doesn’t derail the action at all. Ultimate Reed Richards was initially tricked into creating a dimensional portal and visiting another world — the land of zombies. Duped, he was lured to be a food source, and two-way transportation was available for the Zombies to venture into a new world. Ultimately – pun intended – the Fantastic Three save the day and return to their own dimension unscathed, with the Fearsome Four as their prisoners. Eventually the Fearsome Four escape their prison, a Lovecraftian evil emerges, a mind-swap and an assist from Dr. Doom and Earth-1610 is free of zombies again.

Back on Earth-2149, The Acolytes, under direction of Magneto, released a virus-plague with hopes of destroying the human (non-mutant) race. Little did they know the virus-plague wouldn’t be contained, destroying humans and mutants alike, leading up to the events of Marvel Zombies 1.

And (finally), in the true sequel of Earth-2149, the Zombie Galacti continue to devour entire races (and planets) due to being infected by The Hunger. Will anything, or anyone, stop them? The Avengers pop into a Skrull-Kree conflict while taking an inter-dimensional joy ride, just in time to battle the Zombie Galacti. It was nice to see the Zombies battling on a new planet with a new species, but little is resolved in the conflict. Stay tuned for more Zombie Madness!

The storyline looks hopeless for humanity on Earth-2149 with only pockets of civilization remaining; alternately, positive on Earth-1610, where the Frightful Four zombies were exiled from, back to their ravaged home. Thank goodness for Marvel Comics Database Wiki (http://marvel.wikia.com/Main_Page). I’d STILL be super lost without cross-checking so many characters and events while reading this collection!

Looking Forward to the next chapter of this ongoing storyline!