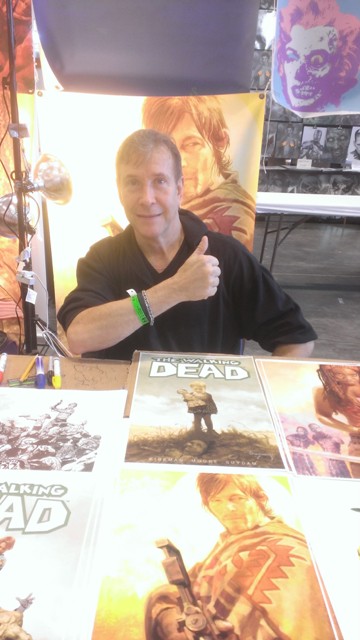 Per Matt
When it comes to undead royalty, Arthur Suydam is the Zombie King!

Before the whole Zombies craze started, Arthur Suydam recognized an upcoming project would be big. Working with up-and-coming writer Robert Kirkman, the two men created Marvel Zombies and the rest is history. Since then, Suydam’s creativity has been running in overdrive, as he’s worked on another iconic project with Kirkman (The Walking Dead), won a Grammy with Bruce Springsteen and recently announced an upcoming Marvel project he’s partnered with Zombie Director George Romero. Recently, at the Wizard World Nashville Comic Con, I caught up with Mr. Suydam to discuss these topics and more.

“Fans like stuff that’s fresh and creative. What the mainstream companies in film, TV and publishing have the propensity to do is try to create entities in-house. The guys who are doing the creations are the bean-counters. These guys are not the creative people. They’re inserting themselves in areas that are not of their expertise. So, when a creator comes along with something great… everything great comes from the talent, basically. Just like with Pixar, it comes from the talent who are writing the stories and doing illustrations.”

“Same thing with comics. It’s creative artists and creative writers who get together and create something special. Artists and illustrators develop an eye for this kind of thing. So, when you see one coming down the road, you know it when you see it. When I saw Marvel Zombies coming down the road, for me, that said this is a departure from the regurgitations of the same themes, which most of superhero comics is. This is something really special, even if the writer does a terrible job on this, this should still be a pretty big hit. And it turns out the writer — Robert Kirkman, my partner on the project — did a great job on it. The covers are what attracted all the attention to the book and made everybody want to look and see what the project was.”

“Based on the success of Marvel Zombies (it’s Marvel’s best-selling trade of all time), I’m told that’s what helped push The Walking Dead to get signed by AMC.” 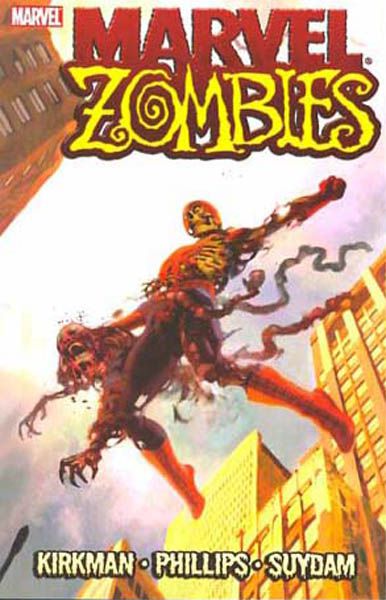 Was it your idea to create undead versions of iconic Marvel covers for Marvel Zombies?
– “Well, I chose all the covers for it. All the covers that I did, I chose. I was doing so many covers at the time, I started to check with some of my friends, ‘What are your favorite Marvel covers, of all time? Send me some JPGs of them,’ and then I would choose from them.”

Do you have a favorite Marvel Zombies cover?
– “No. I have a favorite painting that I’ve done. It’s been submitted to The Walking Dead. It hasn’t been scheduled (for a certain issue) and I don’t know if it they’ll use it or not, but it’s one that I submitted to them for consideration.”

So, you didn’t exactly know where the comic, The Walking Dead, was going, at the time?
– “I had never read it. I knew of it. To me, it was a small fan-produced black-and-white product. There’s a bunch of those. It had a small collection of people reading it.”

Have you worked on any of his comics before?
– “Just The Walking Dead. I’m doing variant covers, right now. How many I’m going to do, remains to be seen. I’ve done one, so far. We’ll see where that goes.”

What is your background in art?
– “I’m actually classically trained. I believe there’s only one or two of us in the business, who are classically trained: There’s me and Alex Ross. The school that I went to was New York Academy of Art. It’s kind of like Special Forces training, in art. It’s extremely grueling. It’s 8 – 5 every day. They train you, formally, as a sculptor. There’s a lot of anatomy work. I had to do a lot of work with cadavers. During the day, the medical students would have access to the cadavers. Then in the evening, we artists, had access to them. I did a lot of work: I drew them, painted them, sculpted them and I was doing figurines for the medical university.”

“I grew up loving (Peter Paul) Rubens’ work and the art of the Renaissance masters. I didn’t like the subject matter… it was all churchy stuff. But I loved comics and I loved horror movies and I loved The Renaissance artists, so my game plan for myself was to learn how to draw and paint like a Renaissance master, but use it to illustrate something that’s fun, like comics. I love comic books. Marvel from the 1960s is what I love the most.” 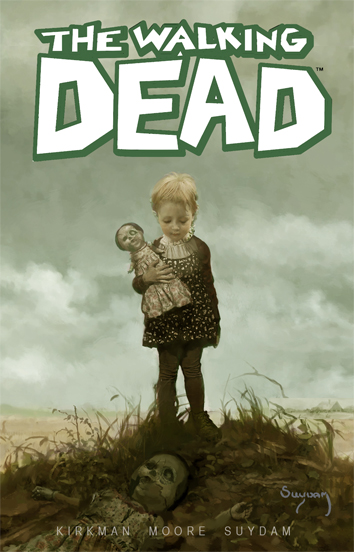 What are some of your current projects that you’re working on?
– “Well, it was a top secret until last week, but the big announcement for New York Comic Con was George Romero and I have teamed. We’re working on a Zombie project for Marvel, right now.”

Can you broadly describe the storyline?
– “It’s a Zombies-and-vampires story in New York. So, it’s a Zombie Outbreak in New York City. I’m doing all the covers for it.”

Will any of the covers include undead parodies of pop-culture icons?
– “Let me see… I’ve done two of them, so far and I’ve got layouts for three more. They’re not parodies. It looks like Norman Rockwell in Zombieland. I actually had an Uncle who studied with Normal Rockwell and I inherited his workbooks. That’s how I learned to paint with oils. I’d done some covers for a series called Raise the Dead, where I did my Norman Rockwell thing. This whole series, I’m doing my Norman Rockwell thing.”

When is the targeted release date?
– “It should be out real soon.”

What keeps you occupied, when you’re not involved with Zombies?
– “I’m a professional musician, as well. I used to be a studio lead vocalist and lead guitar-player. That’s my forte and I’m also a composer. I used to do a lot of movie soundtracks. In fact, my band won the Grammy for Bruce Springsteen three years ago. The Sessions Band. That’s my group.”

Is there anything else you’d like to mention?
– “I have a lot of books coming with Titan Books. They’re doing collections of my Cholly Flytrap, a collection of my Mudwog stuff and they’re doing a collection of all of my Barbarian art combined into two books called The Art of Barbarian. All of these things are about 200 pages long, apiece. So, it’s a lot of work, by me. And then there’s three art books coming out, of my work, as well. Diamond will be distributing them. They’ll be available at your comic stores.”