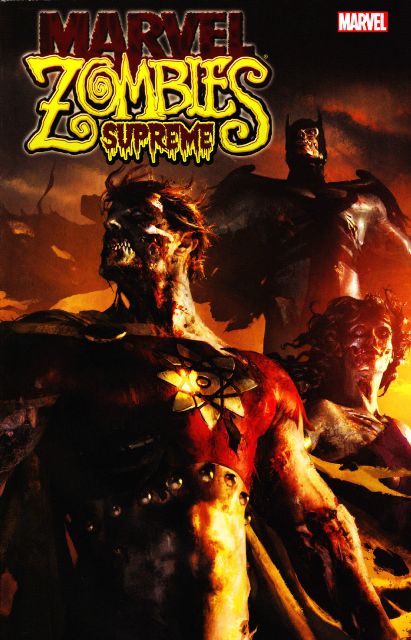 Per Matt
The only thing worse than Zombies are superhero clones… as Zombies!

Marvel Zombies Supreme continues the Zombification storyline in the Marvel Universe on Earth-616.

While researching alternate energy sources, the mentally-ill mad scientist, Dr. Dauoi cloned the Squadron Supreme (superheroes from another dimension, who were temporarily trapped in this universe), attempting to weaponize the super-humans. Whether the mad scientist knowingly creating flesh-starved monsters in the process, is up for debate.

One escaped undead superhero creates his own buffet of human flesh… until he’s confronted by The Harvesters (apparently they’re a Kansas-based minor-leage group of superheroes).

Ultimately, the nine Super Zombies are confronted by a small military unit, plus one low-grade superhero. Seems like an even fight.

Later on, one more superhero mutant is unveiled… one who just happens to be the source of Zeta Energy rays which the mad scientist was tinkering with — Jack of Hearts! A being of pure energy, Jack fights for the everyman, although he typically fights anyone who gets in his way (good or bad). Apparently, Zero Energy was used to create these Zombie clones and Zero Energy can also be used to destroy them, as well.

By the end frame, there’s plenty of carnage and a few good one liners, both of which have been practically trademarked by the Marvel Zombies series.

With each new Marvel Zombies release, the stories feel smaller, focusing on fewer characters and the overall size of the books gets shorter, as well. I’m enjoying the stories, but each time a character becomes undead, I wonder who is left in the Marvel Universe to fight off the impending Zombie Apocalypse for the good guys?

As this is my formal introduction to Squadron Supreme, The Harvesters and Jack of Clubs, Marvel Zombies Supreme was a decent tale, without knowing any of their backstories. By the end, there always seems to be at least one Zombie who escapes, threatening yet another Marvel Zombies tall tale to be created.

Final thoughts: the Mainframe character is an android… so why aren’t there more androids to assist the humans and left-over superheroes in the Marvel Universe? Using android assistance makes too much sense, during the Zombie Apocalypse!

Notable Quotes:
– “You half-dead half-wit!”
– “Grain Belt! Speed your plow!”
– “Tell them we have a Faded Giant.”
– “Wonderful. Getting Zen about Zombies.”
– “So that’s what a particle beam does to Zombies!”
– “I’m afraid we have a Pinnacle Level Bent Spear here.”
– “One wrong move and we could all be eating Chicken Chernobyl tonight.”
– “The Squadron Supreme is gonna go down in history as the worst super team ever!”