Meanwhile… At The Hall of Crossovers and Network Negotiations… 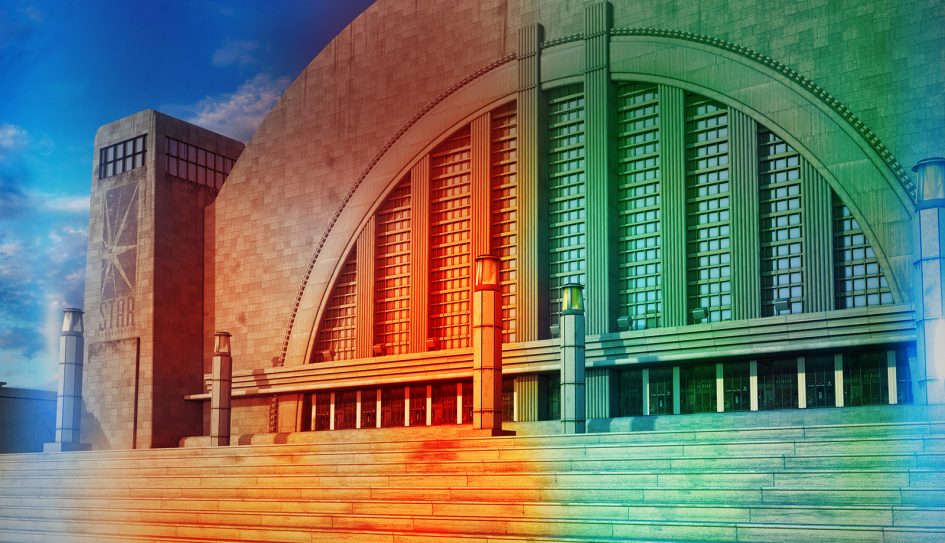 Admit it. You giggled like a little girl when the would-be Hall of Justice was on screen in this past week’s DC Crossover week (#DCWeek) on the CW Network. That is, assuming you could see it behind an awkward crawl promoting The CW’s side of a standoff with AT&T.

Cheesy as it was in many ways, and a tad disjointed, the big DC Crossover was a fun romp and another successful example of their television superiority to their Marvel rival. We kicked off the week with what seemed like an after-thought of a crossover into Supergirl by The Flash. However, the remaining three evenings were much better-integrated. Working as an ensemble, these characters are still able to shine — credit due, mostly, to their skills as actors and some direction and writing choices.

The best example of this is the most “outside” of outsiders in the crew: Supergirl. She comes off almost comical in her goofy pride and campy self-representation, but it works very well for her. She’s essentially the ambassador of the most “bright” of the DC shows. Her Earth is colorful, optimistic, and fun — as she ably expresses. Placing her at odds with the woulda-been-Batman-but-we-have-movies-for-that motif of Arrow was natural polarization, in fact, as it brings up the darker end of the DC spectrum on TV.

We rolled through a well-balanced hard sci-fi story all week, in which the writing erred more for pragmatic compartmentalizations of the characters than believability at times. (One assumes this to be a budget reality.) Lifting plenty of source material from the pages of the namesake comics, the tale of the Dominators borrowed this huge lineup of characters and presented a nice side-story which ultimately can figure into the overall plot line — or not — as only minor elements truly need to be carried forward through all four programs. This crossover can go effectively into the books as a win, though, regardless of its shortcomings. The sheer fun-value of it was noteworthy, and the blatant use of that Star Labs hangar as a stand-in for the Hall of Justice was a wonderful added trait. (My son got super tired of me exclaiming “MEANWHILE…” when it was on the screen.)

It was a bit interesting that what should have been a more celebrated and remarkable milestone for Arrow — the 100th episode — was buried in this larger phenomenon. Times are certainly changing, and such markers of longevity may be less celebratory now than they once were, but competing hashtags are never a wise concept. (#Arrow100 vs. #DCWeek)

Did you catch the shot across Marvel’s bow? It was less of an “across” and more “right up their ass,” really. Supergirl happily proclaims that the gang of Barry, Ollie and company are, indeed, “Earth’s mightiest heroes.” This is, of course, the famed subtitle of Marvel’s Avengers. There is no way this is anything but deliberate, but is it friendly ribbing? Good old-fashioned nerd-fight (“who would win if…”)? Is it, perhaps, more overt? Have the CW and their DC mothership made a conscious choice to at least “boop” the nose of the competition?

I’ve long held that DC should have been waving their banner sharply in Marvel’s face with their more-total control of their properties, as opposed to, say, the disparate and sloppy predicament of MCU vs. X-Men vs. Fantastic Four vs. Spider-Man. Could it be that they have been feeling their oats in the success of the CW’s TV suite and are willing to give Marvel a slight dialogue-based purple-nurple?

Such an effort should be applauded, but I would caution DC not to throw too many stones. The movies are still 50/50 at best with the critical reception and fan base. Some iterations, like Suicide Squad, have been a hot mess (though potentially mopped up a bit with the “extended cut”). As much as I am a gloater, this may still be the time when keeping your head down and doing the hard work to truly dig in on success is in order. Still, it was a wonderful “Aw, naw she di-n’t!” moment.

Blackouts and Greed and Retranmissions, Oh My!

For some viewers, the action was interrupted frequently with a cardinal sin of TV: a top crawl. (At least in my market of Nashville.) What was it? Missing child? Devastating weather? Nope. Just a cryptic message, espousing the doom of the CW being dropped from AT&T-controlled systems; U-Verse and DirecTV. This has since been resolved, but information on it was incredibly hard to find.

Luckily, our affiliate in Nashville has an incredibly friendly and informative staff, and I was able to speak with someone with knowledgeable insight to share with our audience. I won’t name the source, as these are contentious legal matters and I want to be generic enough that they will keep being as transparent as they can. Nonetheless, it all boils down to 11th-hour negotiations to put pressure on AT&T, concerning the price they pay to carry The CW.

You can wave the greed stick at all parties involved to some extent, but lately it is far easier to assume the folks at the Big-A are likely the assholes in the room, if recent events are any indication. At the core, this is all part of the latest round of constantly swirling disputes stemming from changes in the ’90s to “retransmission consent.” (Read more than you may want to know about that, here.) There are two sides to any given negotiation on the topic, and the cable goons and satellite relics do a great job of expressing their respective propaganda on the subject. There is valid criticism from some which points to how little the networks actually invest in the local media market, which was supposed to be an aim of the FCC’s rules on the subject, so it is certainly a multi-sided topic with valid concerns from many angles.

Ultimately, it was a dispute over how much AT&T would be paying a group of CW stations who teamed up with a shared legal representation to negotiate with the telecom behemoth. Shortly before midnight, just prior to the December 1st doomsday blackout, the parties were able to agree that the content which most DC fans would argue carries an increasing value was, indeed, worth it. The backlash was likely quite loud from those wringing there hands about the possible loss of these favorite shows, but it remains to be seen what price impact it may have for consumers down the line.

In the end, we all get to be punished as viewers and taxpayers, while the real-world super-powers duke it out far overhead. Guess the DC Television Universe can get just as messy as the movies on that figurative level.