Middle-Earth’s Origins are Revealed in Tolkien 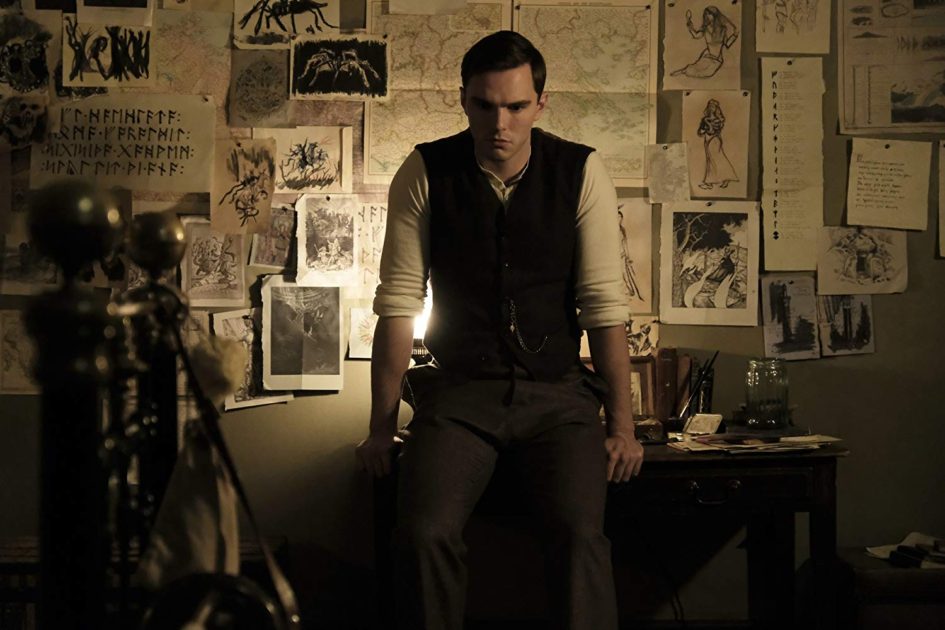 Per Matt
Bringing a writer’s life to the big screen and making it interesting has been a hit-or-miss proposition for Hollywood throughout the years. What can often be described as an isolated event, taking pen to paper (or more accurately these days, typing on a keyboard) doesn’t quite lend itself to an engaging visual experience in HD. Sometimes, however, writers can bring an incredible behind-the-scenes worldview that is more incredible than anything they can imagine creating. Tolkien brings this aspect to light, as author J.R.R. Tolkien struggles to create his epic Middle-Earth novels.

Growing up penniless and an orphan, biopic fans will recognize this as a classic underdog story. But it is the fellowship J.R.R. finds among a group of creative writers, artists and musicians that forms a brotherhood that will eventually become the basis of his well-known written works. While there really isn’t a singular Big Bad antagonist involved within the main storyline (which could be a bad thing), John’s courtship with Edith Bratt (played by Lily Collins) and the emergence of The War to End All Wars threaten to break up this strong bond of friendship.

Fans of The Hobbit and The Lord of the Rings book series will notice nuggets of fan service scattered throughout, although none will be beaten into your head for your recognition (with the exception of Smaug’s cameo). You will notice bits of inspiration scattered throughout, but that’s not the primary focus here (THAT would make an even better movie!). Nicholas Hoult carries the weight of the film on his shoulders. While I’ve never gone out of my way to praise the actor, he has always given blue-collar performances in his big-budget appearances (Mad Max: Fury Road and the X-Men movies), so this smaller, more intimate film seems just right to shine the spotlight on the thespian to get his due recognition.

Superhero fans will recognize the origin story setup, although I’m not a fan of the flashback style of storytelling that seem to be prevalent in these type of movies. Lily Collins’ performance is the emotional strength of the movie, here portrayed as the biggest influence of the author, offering encouragement for the writer to finally complete his never-ending story or to quit writing altogether. Her character also knows how to pull on the heart strings, as I found myself crying multiple times with each turn of these characters’ events.

For biopics, I cannot determine what may or may not have been embellished for the big screen in movies that are all “based on a true story,” but I judge all within the genre by Finding Neverland, which is one of my all-time favorites, followed closely by Hidden Figures, Straight Outta Compton and Walk the Line, while Goodbye Christopher Robin, Steve Jobs and First Man round out the list.

With Disney finalizing the company’s buy-out of Fox, this could be one of the last big-screen releases of Fox Searchlight, as the film studio will soon be shuttered. This movie should see small to moderate business, more so in England, but may not have much of an audience here in the States, as it competes with the likes of Avengers: Endgame and other summertime blockbusters. Hopefully, the lead actors will receive awards nominations later this year and an even bigger audience will be awakened for the movie.

As a fan of biopics, I had no idea what to expect from the director or the two writers, as I’d never heard of them before. Check out the trailer to determine if you’d be interested in watching the movie, which I’d recommend. At the very least, you’ll now realize you were pronouncing his name incorrectly for all these years (it’s toll-KEEN). And if you attempted to grasp the storyline of The Silmarillion (which would make a great HBO fantasy series, if created by the Game of Thrones producers) by reading and re-reading until you could finally figure out what was actually happening in the book like I did, you’ll immediately understand why the author had a hard time finishing his novels (many of which were completed by his son, Christopher Tolkien, after the author’s untimely death). You will definitely see some sly references to his written word in this film, which I really enjoyed.