The Orville Has a Bortus Problem 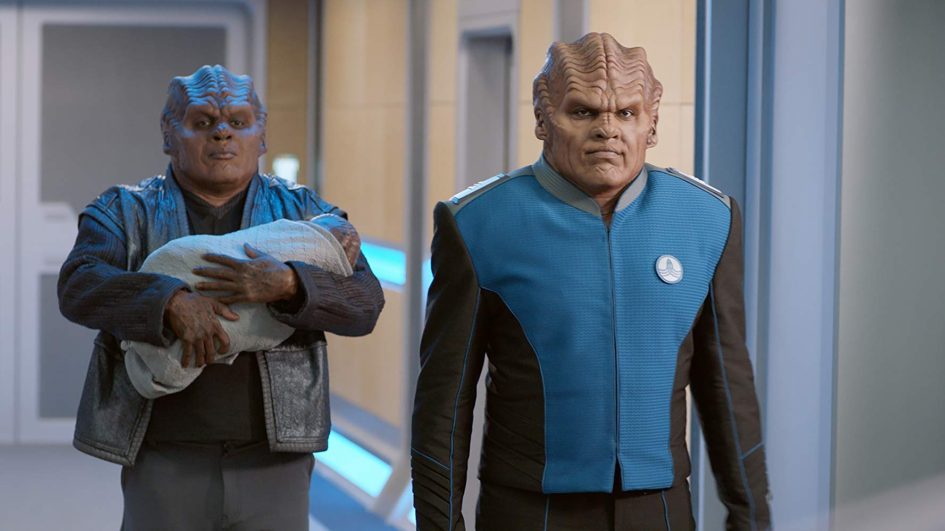 The Orville has a Bortus problem whenever Chad L. Coleman and Peter Macon share a scene in the sci-fi TV show.

If you happened to watch the season finale of The Orville last week, you might have noticed one of the main characters didn’t make an appearance until the episode’s final act. At times, working the Moclan character into an ensemble storyline has been difficult for Lt. Cmdr. Bortus (portrayed by Peter Macon), who has been a highly controversial character on the TV show ever since the series’ third episode aired, “About a Girl.” That was the one where the alien creature and his male mate decided to perform a controversial sex reassignment surgery on their newborn child. It wasn’t enough that creator/producer/writer/star Seth MacFarlane felt the need to push his personal politics onto the series’ audience, but he also felt the need to try to make everyone agree with his feelings.

Coming from a bleeding-heart liberal, this is just par for the course. Whereas The Twilight Zone and Star Trek: The Original Series would often disguise social reform within the science-fiction genre, MacFarlane has been as blatant as beating the show’s audience over their heads with his beliefs. Apparently, his views are correct and no one else is allowed to have an objection on the filmmakers’ production side, as it wasn’t a one-time thing. MacFarlane doubles down for Season 2, as Bortus returns to live out his sexual fantasies in the holodeck, which doubles as a pornographic simulator, while cheating on his life partner. Did I mention the alien race is an all-male species, by choice? This kind of scenario is one I’d expect on late-night pay per view, not airing on network television.

I’m trying so hard to like The Orville. I really want to like the TV show, but I absolutely despise these Bortus-centric episodes. In fact, with the first one airing so close to the series premiere, I actually quit watching the show all together — it couldn’t get any worse. Curiosity didn’t kill me, as I eventually caught the reruns airing in the summertime, which returned my interest to the show. After the sophomoric humor that appeared in that pilot episode, it tried very hard to be the “new” Star Trek for a modern age, even though Star Trek: Discovery aired not long afterward on CBS All Access. Now that it’s trying to be more serious, can the writers please get off their high horses and stop preaching their politics to the masses?

Nobody asked for MacFarlane’s politics (or Brannon Braga’s, for that matter) to rear its ugly head as a premise on this show. I’m no prude, but having an alien race taking part in a gay pornographic simulator is going too far. It wasn’t funny. It didn’t move the storyline forward, it NEVER would have happened in Roddenberry’s Universe… it was simply done for shock value. I don’t like the Bortus character at all, as it’s written so poorly, it’s often forgotten about in all storylines except those written explicitly for the Moclan.

I’ve given the show a second chance because I’m still trying to support quality science fiction airing on network television, but I’m this close to quitting it for a second time — this time for real. Having stopped watching it once already, it’ll only take one more explicit Bortus episode to push me over the edge for good.

With the closure of Disney’s buyout of FOX, I wonder what changes are in store for the television program for Season 3? Although the family friendly mega media company has bought out the majority of 20th Century Fox’s assets, Disney does not own own the rights for the network TV station. Does that mean that both Disney and Fox are partial owners of the series? And if so, how long can it survive once a demand is made by one party (such as cleaning up all future storylines) and the other side refuses to make any changes?

The future of the series really is up for grabs, but Disney tends to ALWAYS get what it wants. That could mean cancellation in the near future, with MacFarlane picking up the pieces and moving the show to a streaming service. Or the future could be brighter with a more streamlined writer’s room. Stay tuned, sci-fi fans. We’ll find out what happens sooner or later…