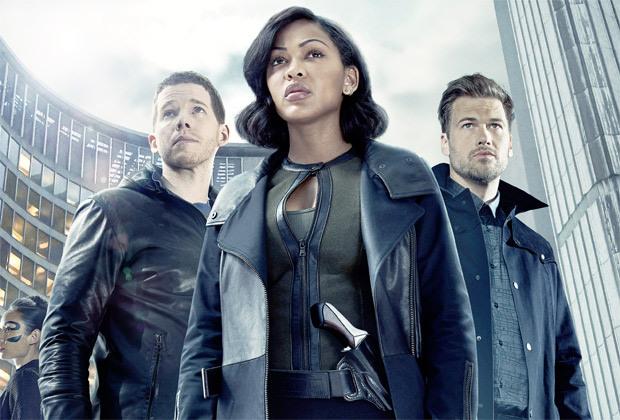 Thirteen years after Tom Cruise and Steven Spielberg paired up to make a movie based on the Phillip K. Dick short story, Minority Report returns to the small screen.

Spielberg returns as the Executive Producer of this TV series, which is technically considered a sequel to the movie. This time around, the main focus lies with three people who have the ability to predict crimes before they happen. As the children of drug addicts, an experimental therapy brought them back from a brain-dead state with a mutant-like ability. Known as Precogs, they previously worked for the government until the Precrime program was shut down. Now they attempt to live an anonymous, normal lives, even though they’re still haunted by their gifts.

“How far would you go to save the future?”

That’s the question posed by Dash (played by Stark Sands). As a Precog, he can see every murder within 100 miles, days before they happen. Unfortunately, he can’t predict every single detail of the events. While he can see the actions that will happen, he requires his twin brother, Arthur (Nick Zano), to give the names of the victims. In the pilot episode, it’s unclear what kind of abilities are shared by their foster sister, Agatha (Laura Regan).

When Dash tries to solve a crime before it happens on his own, he’s introduced to Detective Lara Vega (Meagan Good). As an uneasy team, they work together to fight crime, all the while Dash’s identity could be jeopardized and threatened by the very people he helped lock up.

There’s awesome futuristic technology and cool public transportation showcased on the TV show, but the free will vs. destiny debate is never truly addressed. Perhaps it will rise up in future episodes. Meagan Good portrays a strong lead character and I really like Li June Li (although I’m not sure about her costume choices), but Wilmer Valderrama’s accent is more than a little grating.

There’s plenty of antique pop-culture references made throughout the first episode and there’s sure to be many more in subsequent episodes, but how long will it take before all three Precogs are reunited? Hopefully, it won’t take too long, or else the audience may also be history.

Strength: Interesting concept.
Weakness: May not last very long in a television format.
WTF Moment: In one scene, The Simpsons Season 75 Spectacular is advertised in the background. That’s one prediction we’d love to see!

Notable Quotes:
– “The future isn’t set in stone.”
– “The only future you cannot see is your own.”
– “You think you can fix the past by meddling with the future?”
– “Can you believe we used to stop this stuff before it happened?”