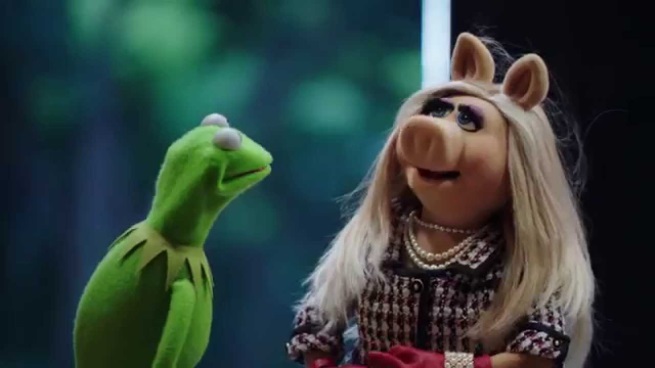 After the equally successful and fun 2011 movie written by Jason Segel and Nicholas Stoller of the same name and its so-so sequel, Muppets Most Wanted, the Muppets have finally arrived home. Back where they began more than 60 years ago, when Jim Henson created Sam and Friends with his eventual wife, Jane Nebel, the Muppets have had a long and successful venture with the medium. From helping teach the young ones on Sesame Street to making adult references in The Muppet Show (my all-time favorite!), those lovable puppets have had quite a diverse audience.

This time around, The Muppets has become a reality TV-mockumentary show within a show, featuring the personal lives of the titular characters as they film the talk show, Up Late With Miss Piggy. It’s definitely not a show aimed for the pre-teen crowd, but it’s one that can be enjoyed by children of all ages.

What can viewers expect? In the pilot episode, Pig Girls Don’t Cry, Kermit and Miss Piggy have broken up and that makes life difficult for everyone involved with the TV show. Piggy’s become an intolerable diva and there’s all sorts of backstage mayhem, along with plenty of celebrity cameos throughout the episode.

Filmed in the documentary style popularized in The Office, many of the characters are incredibly self aware (and that’s not a bad thing). Scooter is incredibly clueless (much like Dwight Schrute), there’s funny bits (Dancing with the Czars is a great flashback to The Muppet Show) and tweaks to past characterizations (both Fozzie and Kermit have new girlfriends).

Taken as a totally separate entity, this show is enjoyable. However, when compared to past versions (The Great Muppet Caper, The Muppet Show, The Muppets movie of 2011) it’s a little tough seeing new versions of your favorite characters, whom you’ve come to know and love throughout the years. Granted, this new TV show is a great opportunity to introduce amazing old-school characters to a totally new audience, but maybe these characters are simply suffering from stage fright. Perhaps their true characterizations will eventually shine through, after a few episodes. I’m just hoping there will be frequent references to past events of former TV shows and movies featuring these very same characters.

Strength: The Muppets are back to creating mayhem on network TV!
Weakness: Some of the characterization changes may be a little jarring.
WTF Moment: Janice has a new voice that’ll take some time getting used to.

Notable Quotes:
– “What can I say? I’m attracted to pigs.”
– “My life is a bacon-wrapped Hell on Earth.”
– “One-on-one interviews? What an overused device.”
– “Perhaps we should demystify any further misconfusion with a daily confabulation-type meeting.”