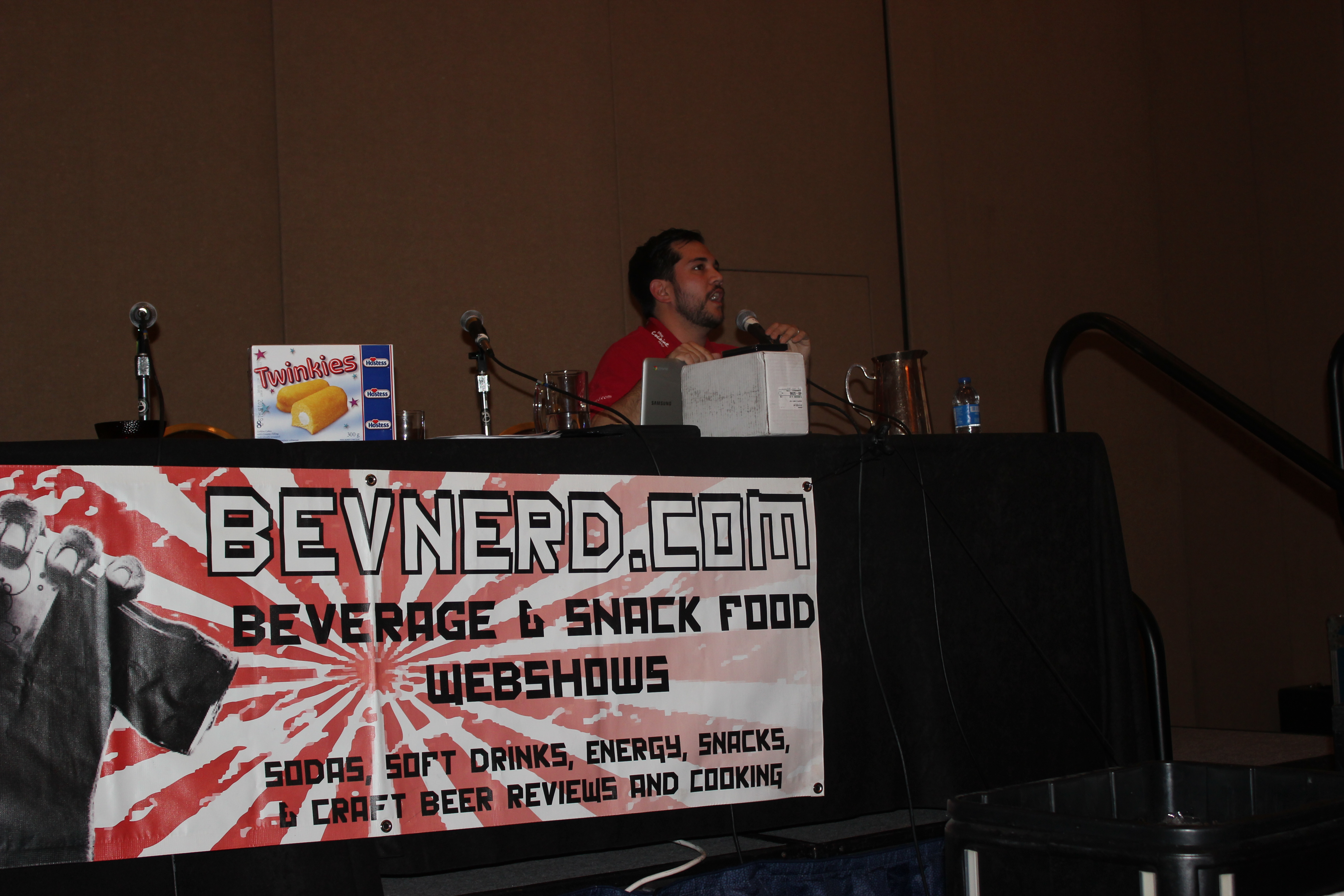 While attending MomoCon this past weekend in Atlanta, I attended the BevNerd panel. But this was one convention panel unlike any other. It came complete with bacon jerky, Wired Waffles and Cocaine (a caffeinated drink) for everyone to sample. BevNerd is a video podcast, created by Jason Coleman. In it, he samples the most bizarre beverage and snack foods, so you don’t have to. Jason’s live MomoCon Panel follows:

After the wildly entertaining panel concluded and the podcast was complete, Jason was kind enough to agree for an interview:

BevNerd was your creation. How did you come up with the name? And the premise?
– “Prior to BevNerd, I ‘mastered’ the art of filling vending machines for a beverage company. I looked forward to when new products, drinks and snacks arrived, for us to use. I would always try to be the first one to try them. I ‘nerded’ out over limited-time sodas and planogram changes in snack machines.”

Was creating BevNerd always a goal for you? Or did you randomly think it up?
– “It wasn’t always a goal, but with retiring from pro wrestling, I had no creative outlet, and found myself bored. I stumbled upon a seasoned veteran of a webshow called Freezerburns, where frozen food was being reviewed. I thought, ‘WOW! I could do something similar, but with sodas and junk food.’ So, I did, starting with a video in my dining room with a blanket hanging on the wall.”

You originally started the podcast on the Cheap Ass Gamer webpage. Why did you choose CAG to post your original podcasts? Did you have multiple webpages, or only CAG?
– “I chose CAG because it’s a site I frequently visit for video-game deals. I started keeping up with the blog section and saw the ‘1. Start a blog 2. Get featured on CAG 3. ???? 4. Become famous!’ So, I started it there, in hopes of being famous-ish? I only posted on CAG at first, then I started BevNerd.com. I also post the videos on GuysNation.com (when I remember).”

Did you get people’s feedback from CAG before you started the podcasts?
– “Well, I did make a preview video/intro to BevNerd and it did get a positive response on CAG, so I went with it!”

As a gamer, when did you first get hooked?
– “When I got an NES for Christmas!” 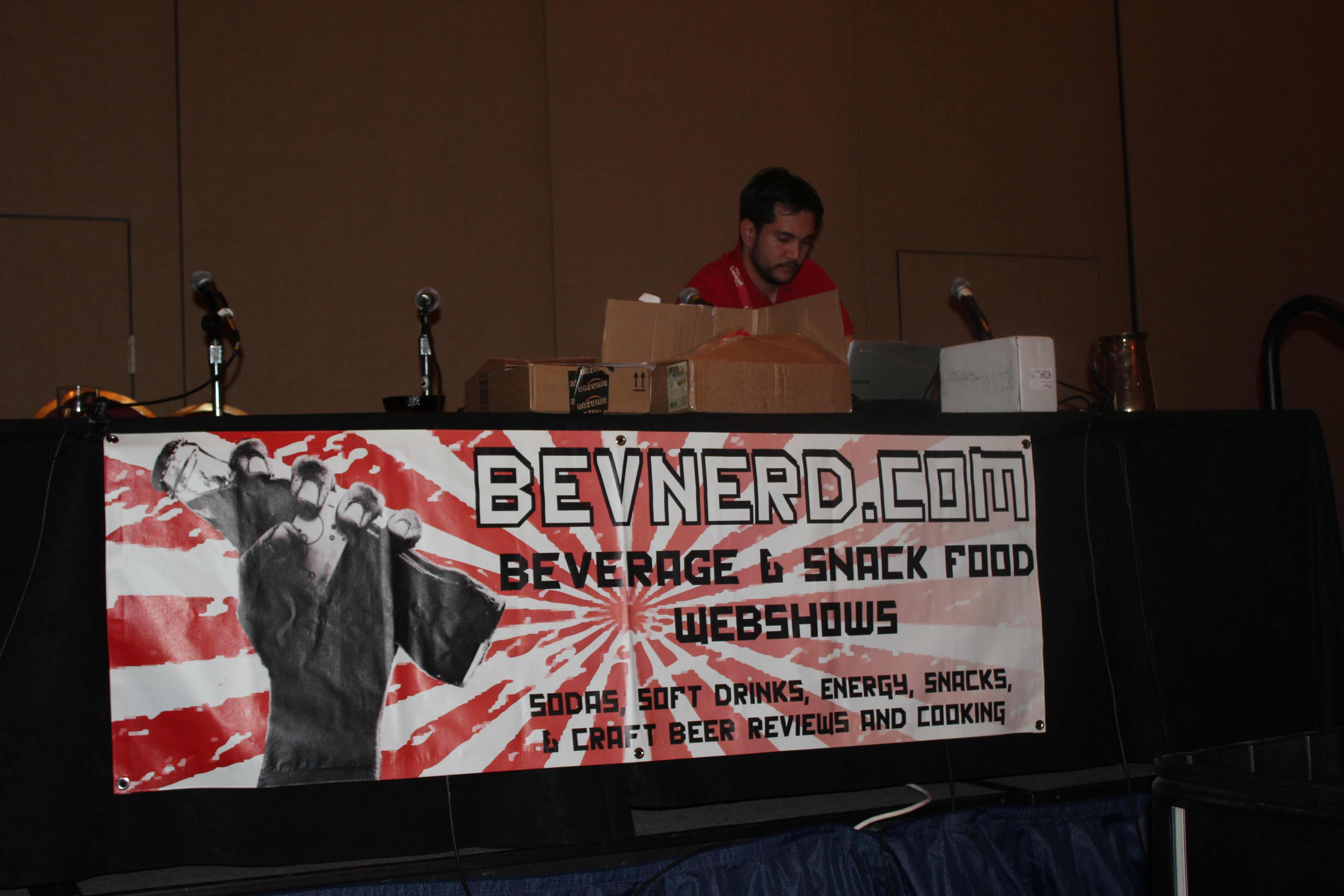 What is your earliest gaming memory?
– “Saving up my allowance and going to Walmart to purchase Mega Man 2, my second-favorite game of all time!”

What was your first arcade experience (as in a mall, or other place)?
– “It was at the Gadsden Mall at an arcade called Aladdin’s Castle! I know I played a lot of games that day, but I specifically remember playing WWF WrestleFest!”

As a soda employee, did your employer help you get your podcast up and running?
– “Ehhhhhhhh, they didn’t know about it at first. It was pretty much a secret project from my job. I wasn’t sure how the company would respond to one of their employees trying products we don’t make.” 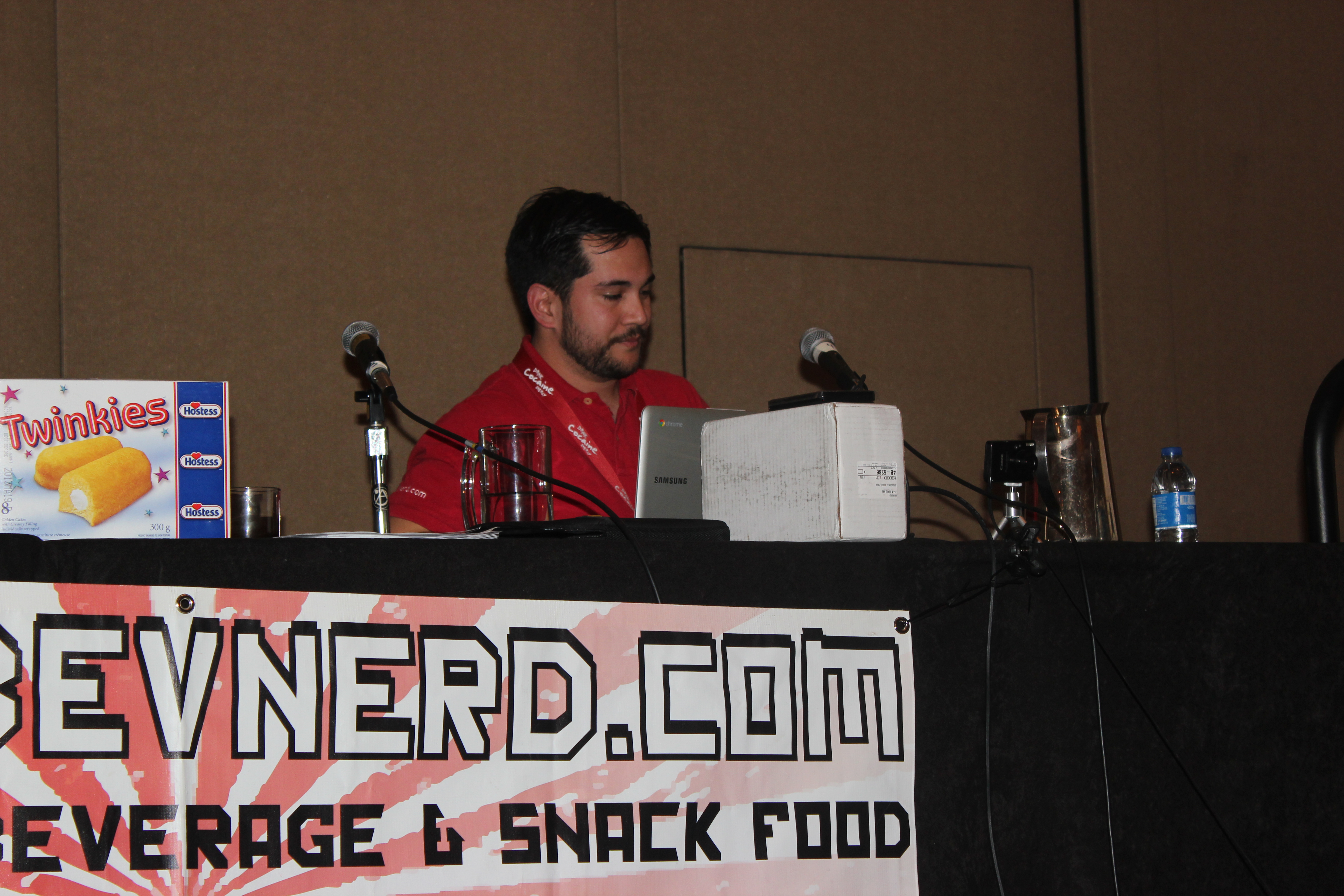 What does your employer think about your podcast? Have they ever tried to persuade you not to review rival products?
– “They have always been pretty positive about BevNerd. Sometimes, they are surprised with the popularity or the events we get invited to. My boss was very happy to see the great turn-out for the BevNerd Podcast LIVE at MomoCon. They haven’t had any input, one way or the other, about reviewing rival products. I don’t really review anything too mainstream-y unless it’s something that just came out to market.”

When you began you podcast, did it begin with drinks only? How did you get involved with snack foods as well?
– “It didn’t start off with drinks only. The first episode featured Pepsi Max, Milky Way Simply Caramel, SoBe Life Water and Burger King French Toast Snacks. (Product OVERLOAD. I learned to only review one product/brand per video. I felt like beverages only wouldn’t last very long. So, hand-in-hand, junk food and sodas it was!”

How did you get partnered with Wired Waffles?
– “I think I heard about Wired Waffles on Twitter. They had asked a question on your vision of a Wired Waffles commercial. I replied back they should shoot out of a toaster like a cannon, because they have SO much energy in them. Since then, I’ve been sent review samples of WW and got to taste the evolution of the product. It’s come a long way and is more delicious now, and comes in multiple flavors.”

How did you get your podcast sponsored, to go to conventions?
– “Well, I can’t give away all my secrets! I just build relationships with brands that I enjoyed to review. I don’t ask just everyone for sponsorship. I go through my previous reviews and think of the products that I liked, or follow up with companies that have worked with me on prior contests. I wouldn’t bring a product to a convention that I didn’t think highly of, personally. It would besmirch my integrity as a reviewer.” 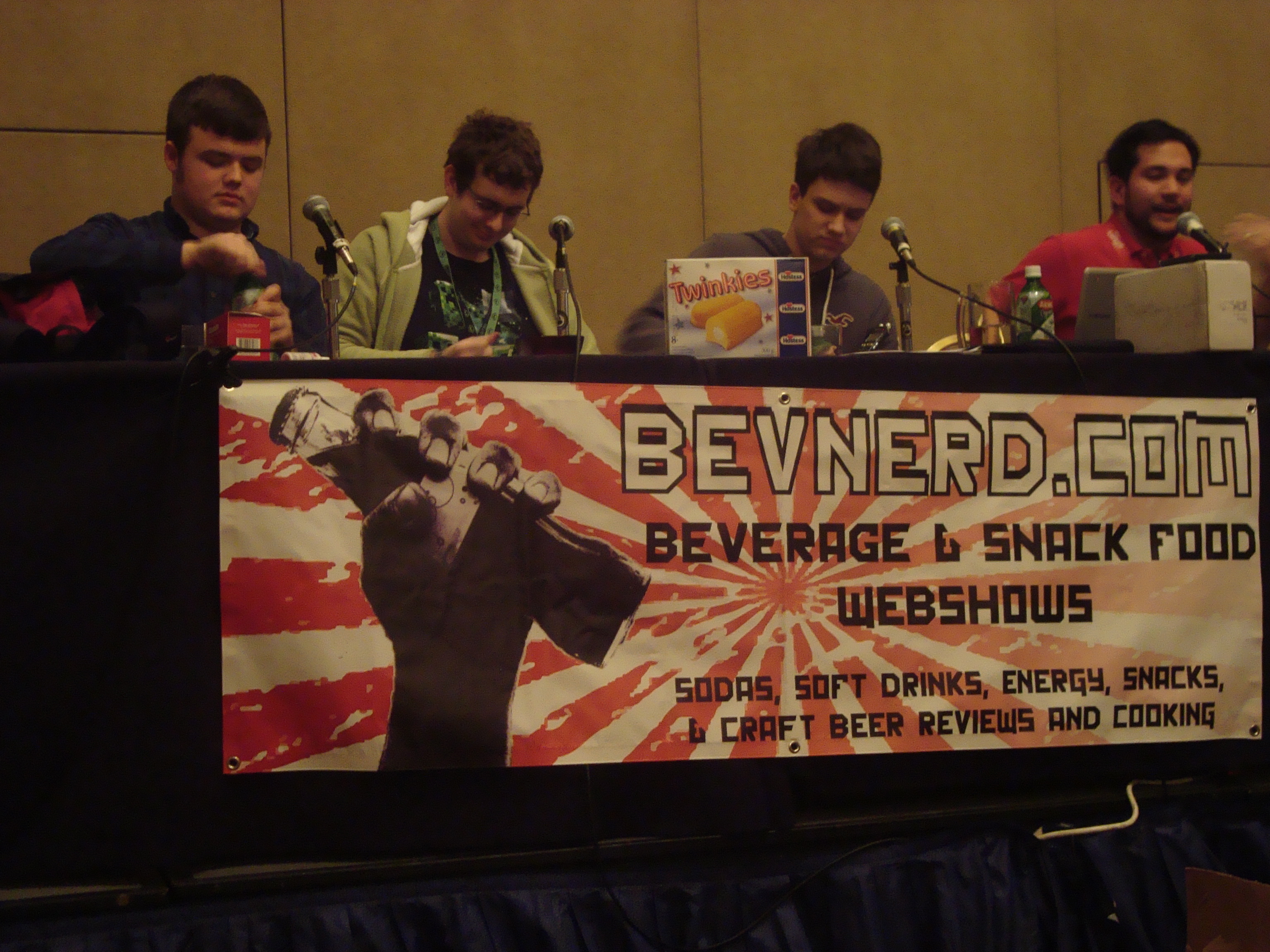 How many conventions do you plan on attending this year?
– “At least one more (Alabama Phoenix Festival in Birmingham, AL) and a couple others, possibly.”

How often do you film your podcasts with live audiences?
– “Usually at conventions only, but I have done some live on-location shoots at food and beer festivals, on the streets and wherever else, too.”

Have you been turned down or to review any products? Any companies afraid to get feedback?
– “Not really. I’ve reached out to some companies and didn’t get any response. As far as I know, no one has been afraid to be reviewed.”

How many people are involved with the podcast? I’m considering doing one, but afraid of taking on too much work.
– “As far as the podcast side of things, I record, host, edit and publish BevNerd Podcast. My wonderful wife helps to make sure the camera is in focus and keeps me from doing stupid things. It is a lot of work, but after three years, it’s just a process, after I record. It’s not too bad. It really depends on what I want to do versus how much time I have.”

What lies in the future of BevNerd? Anything you’re looking to implement into future shows?
– “I want to keep producing reviews! I’d love to somehow parlay my experiences with BevNerd into becoming a brand manager for a beverage or food brand. I’d love to just do BevNerd things as a living, because I love doing it and it doesn’t feel like work, most the time. I would like to do more tour videos, like the one at Bud’s Best Cookies or even take the show on the road! It would be awesome to become the next Unwrapped or travel/food show.”