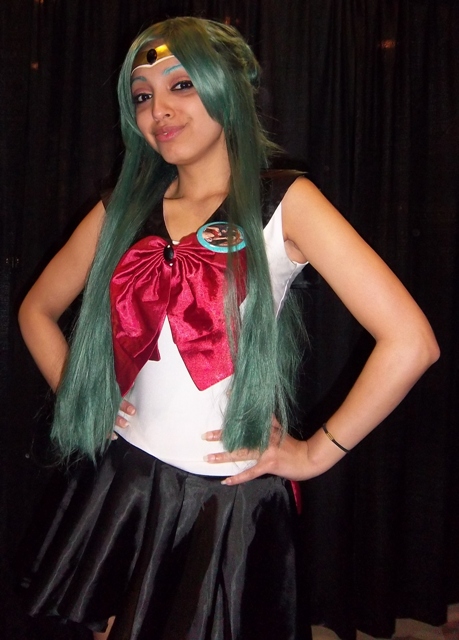 Per My Brother
Nana Valtiel is a true Geek Goddess. Always keeping busy, she’s a professional costume designer and seamstress, as well as pin-up model. She takes photo requests from the Geek Goddess forums, however, whatever costume she makes gets double duty, because she’s also a burlesque dancer. Nana was kind enough to sit for an interview while participating at the 2013 Middle Tennessee Anime Convention.

What, exactly, is Geek Goddess?
– “Geek Goddess is a website with geeky girls, created by geeky girls. It’s kind of like a nerdy Playboy. Think 1920s or 1940s classic Playboy. Not Penthouse Forum. All our models are geeky. Our photo sets are not just cosplay. We don’t have to do specific characters. Like, for my Valentine’s Day set, I was in a Lolita dress with a corset and I put on persocom ears to look like I was from Chobits. It’s basically for nerdy people, by nerdy people.”

How does the webpage work?
– “It’s a member-based pay site. You pay to see the sets, and that’s how the models get paid. We interact with members in the forum. The panels that we have at MTAC come from the forums. So, we had Questions You Were Too Afraid To Ask A Nerd Girl. We also had How To Talk To Nerd Girls. That was describing how to step out of your socially awkward norm.

Is this your first time attending MTAC?
– “This is my first time in Nashville, ever.

What are your main geek interests?
– “I have a lot of geek interests. I’m a reptile nerd. I love snakes and geckos and lizards. The only thing I don’t touch is frogs. I don’t like frogs. Mostly because I’ve been to Columbia before and there’s a certain type of frog in the Amazon. You can’t touch it. Because if you do, the saliva that comes out of its skin can kill you within 20 minutes.

Any other geek interests?
I’m a psychology nerd. My mom is a forensic psychologist. I pretty much learned whatever I know from her. I’m a comic book nerd. I grew up with Marvel but then I rebelled against my older brother and went with DC. I have a Harley Quinn tattoo on my leg. I have a Star Wars tattoo on my torso. I always loved everything Batman and then recently I rewatched Superman: The Animated Series and fell in love with Live Wire. So, when I get back to New York, I’m shooting my Live Wire set. I’m excited. I really like obscure comics. Apparently, a lot of people didn’t read Birds of Prey, because I cosplayed White Canary and everyone thought I was a sexy nurse. Since when do nurses wear ninja masks? I felt like walking around with a sign over my tits saying ‘I’m White Canary.'”

I started with DC comics, but have moved on to preferring the Marvel Universe films.
– “I definitely cosplay a lot more Marvel, because other than Wonder Woman, their female characters don’t stand out to me that much. Marvel tends to have the strong woman figures and in The New 52, DC has just objectified all their women. Harley Quinn has pretty much lost all her morals. I think in the first issue of Detective Batman, Catwoman is ready to jump into bed with him. In the first issue of Red Hood and the Outlaws, Koriand’r looks over and says, ‘Do you want to have sex?’ What the fuck are you doing, DC? I thought you were trying to create strong, empowered women? Not extremely horny women. Calm down the libido just a little bit.”

What anime do you enjoy?
– “I’m an anime nerd. I watched everything from Cowboy Bebop, Vampire Hunter D, Gundam Wing, Neon Genesis Evangelion and Dragon Ball Z. I’m stoked for the new Sailor Moon series that’s coming out. There’s going to be a lot of new Sailor Moon stuff that’s going to come out, but it’s not going to be the same whiny voices from the bad English dub of the ’90s.”

What video games do you enjoy?
– “My first RPG was Final Fantasy VI. It’s the love of my life. I still play it, to this day. After VI I started playing Super Mario Bros. and Zelda. I really wasn’t into the Zelda games like everyboy else. It’s definitely not my type of RPG. Final Fantasy VII — not my favorite. Pretty much Final Fantasy VI through XIII I’ve played. After that, I have not played. I want XIII Versus now! You gave me XIII Part 2 before XIII Versus and Versus was announced before XIII! If you’re not gonna give us the game, then just say you’re not gonna give us the damn game. And stop playing cocktease! I have videogame lady blue balls and that’s not cool!”

How did you get interested in attending conventions?
– “I didn’t start going to cons until 2006. I’ve never liked leaving the house, since I was about 10 years old. My mom didn’t know what to do to get me out of the house. She knew I was into comic books and anime, and she helped me make my first costume. She took me to Big Apple Comic-Con, when it was in church basement. That was before it was Wizard World New York. It was nice. I liked it, so she kept taking me to more shows. I started working for New York Anime Festival in 2008 and then I joined Cosplay Deviants in 2009 when I turned 18. I worked for them for a little bit and then I joined Geek Goddess as one of the launching models.”

Is that when you joined Geek Goddess?
– “No. We’re new. We launched in September at DragonCon. I’ve been going to DragonCon since 2010.”

Do you have any favorite moments from DragonCon?
– “My first DragonCon was very memorable. It was my first time there; my costumes weren’t really up to par. So, it really made me step my game up. I saw how much people put into their work and it was like the Big Kahuna of Conventions and Cosplay.”

What conventions will you be attending next?
– “I may be going to Anime Boston, Philadelphia Comic-Con, Anime Next in Jersey, Florida Super Con in Miami, Otakon in Baltimore, Intervention in Maryland, DragonCon…”