The Walking Dead: Welcome to the Tombs 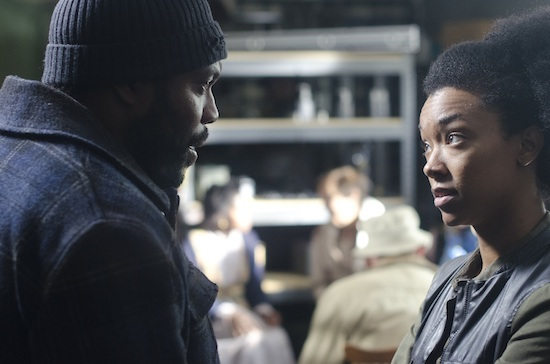 Here it is! We’ve finally made it to the Season Three Finale! Who lives? Who Dies? And what lies in store for Rick’s Gang in Welcome to the Tombs?

The Governor starts things off with a bloody splatter: First by torturing Milton, then by killing him. It was an unexciting death, but I suppose at the end, he eventually cleared his conscience (although it was a little late by the time he finally came around). Back at The Prison, everyone’s packing up their belongings. I thought at the end of the previous episode, everyone had decided to hunker down and fight The Governor. I guess I was wrong.

As usual, The Governor has riled up the citizens of Woodbury into a frenzy. With very little exposition, they load up their vehicles and weapons and begin the all-out attack on The Prison. Machine guns, grenade launchers and explosions abound. Cue the “evil” techno music as the troops set foot through the gates… but no one seems to be home.

Tyrese and Sasha refuse to fight the living, opting instead to protect the children in Woodbury.

In the dark, The Governor explores The Prison’s depths and walks into a trap. Wearing riot gear protection, Glenn and Maggie fire the first shots (nice recall of a previous episode). Inexplicably caught offguard with a jammed heavy machine gun, The Governor’s crew escapes… all but one. And that one is killed in cold blood by Carl to Hershel’s astonishment. As I previously stated, Carl’s grown too big for his britches.

As soon as The Governor can catch up to his fleeing troops, in a mighty rage, he guns the majority of them down. Again, lives taken in cold blood. Three opt to remain at The Prison should The Governor return while the rest return to Woodbury to find a dying Andrea. Afterward, Rick’s Gang grows with the leftovers of Woodbury, they all return home to The Prison. And somewhere out there, The Governor survives with his mad rage.

When Rolling Stone gave the spoiler of 29 characters not surviving the Season Finale, I didn’t expect the majority of them came from treachery. Although the storyline moves along, nothing is quite resolved with their conflict. With so much death happening, Composer Bear McCreary kept the music subtle and very emotional. It was very touching.