Music Unites All as Bill & Ted Face the Music 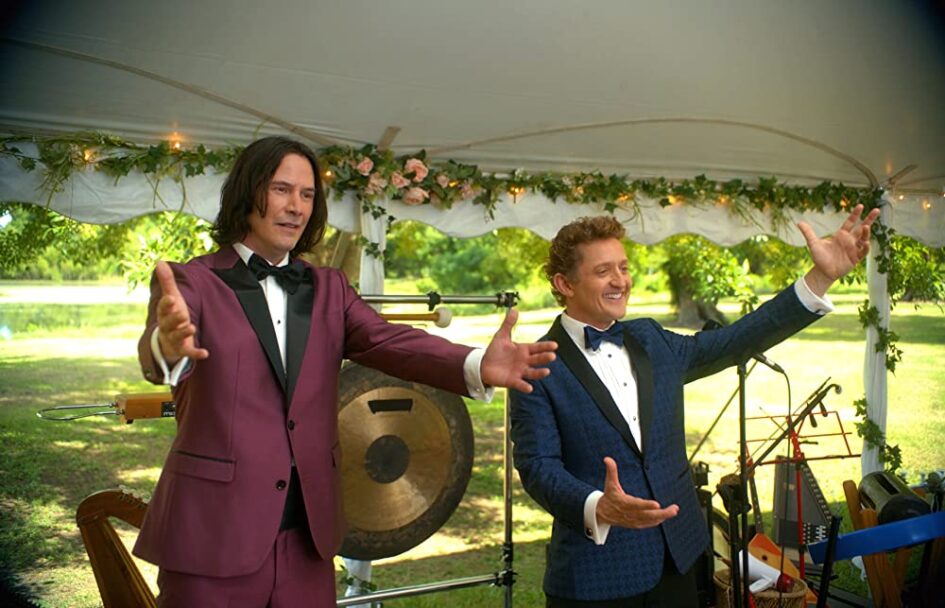 Be excellent to one another!"

Per Matt
Nothing screams the ’80s like a time-traveling phone booth. While it was a great decade for movies, little did we know a franchise would be based around a couple of slackers from San Dimas. Two years later, those same metalheads would reunite for a Bogus Journey, and then their travels were temporarily silenced by custody issues.

We previously wondered aloud, “30 Years Later, What Can We Expect of Bill & Ted?” While the threequel was delayed for almost a decade, the films’ stars simply made other plans. Alex Winter’s journey as a filmmaker has led to directing music videos, commercials, documentaries and feature films, while Keanu Reeves has effectively become an action hero (Who could have vaguely predicted that one?).

By the time Face the Music finally premiered, these excellent characters have been all but forgotten by many. That’s why seeing William S. “Bill” Preston, Esq. and Ted “Theodore” Logan return to the big screen is so difficult for the first half of this film. While Winter and Reeves slip into their respective characters with ease, middle-age regrets have seeped into their lives, as they STILL have yet to fulfill their destiny, dearly holding onto their past.

Wyld Stallyns has broken up and our favorite slackers STILL haven’t written the song intended to unite the world — 25 years of writer’s block will do that to ya! The Great Turntable is tipping and as a result, the universe is unraveling, folding onto itself. When given a countdown to prevent the walls of reality from collapsing, it’s about TIME they get started!

As a Child of the ’80s, I was a fan of the original film (and really enjoyed the PC video game adaptation). Bogus brought some originality to the franchise and watching this movie really did feel like I was entering a time warp. While the basis of the storyline is present, it’s very thin and feels like it repeats too many beats of the first chapter. The main difference here is all the girl power.

While “Little Bill” and “Little Ted” seemed to be boys at the conclusion of part two, they’re now Billie and Theadora. (Supposedly, this was the screenwriter’s plans all along, but I’ve witnessed too many pop-culture retcons to fully believe him.) And those princesses the boys whisked away from the 1400s? Once couple’s therapy doesn’t quite work out, they decide to search for a time when they can actually tolerate their husbands.

So, while the wives are off, the daughters decide to form a successful band made up of past musicians. Meanwhile, the dads seek answers to unite the world and save reality, dude.

“Alls we gotta do is write the greatest song ever written that brings the entire world into rhythm and harmony, to save reality as we know it all through time.”

George Carlin must be rolling around in his grave about now. While not that bad, this film’s prophecy seems to be an easily attainable McGuffin that was actually stretched into three films. There should’ve been more comparable goals for the main characters, instead Face the Music runs into the same predicament as the Terminator franchise. If you keep moving the ultimate problem (instead of fixing it), at some point the characters have to do something different or the audience will quickly grow bored.

And then this film was released during a global pandemic. It REALLY felt out of place for a time-traveling film to be released at the wrong time for audiences. This is a popcorn film you should enjoy inside a movie theater, not on a computer screen. A six-to-10-month delay for the premiere should have made more sense back then.

Instead, its meager worldwide box office looks like future spinoff possibilities are little to none. And since I felt the daughters (Brigette Lundy-Paine and Samara Weaving) were trying too hard to imitate their fathers’ acting, I’m totally fine without seeing their solo adventures.

While they may have traveled to heaven and Hell, as well as the past and the future, Bill and Ted have had some pretty great adventures. I can’t say they’ve united humanity across all time and space, but through three films, it’s been a pretty good run.